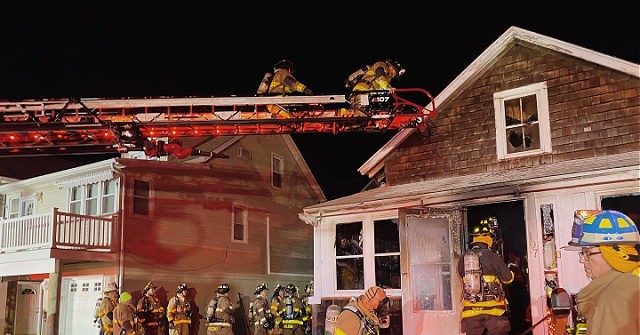 A 94-year-old World War II-era veteran from New Jersey lost his home in a fire last month, but loving neighbors and a tidal wave of online donors from all over the country are working on getting him back on his feet.

New Jersey native Paul Roberts was born in 1927, spending his formative years living through the Great Depression and World War II, a GoFundMe page for the veteran, created by his neighbor Erin Obermeyer, states. At 17-years-old, he pleaded with his mother to allow him to leave school and enlist in the Marine Corps.

By the time he finished boot camp, the war had ended, and he never saw action, although, at the time, he wished he did, according to his crowdfunding page. He was deployed to ground zero of Nagasaki, Japan, following the dropping of the atomic bombs.

After his time in the service ended, he worked as a mailman until retiring in the 1980s and then settled into his Ship Bottom home, WPVI-TV reported. He is a fixture in his neighborhood, often seen riding his bike or taking a stroll.

“I seen smoke coming in the bathroom door,” Roberts recounted to WPVI-TV. “I took one breath and I knew right away I would never take a second breath and live.”

The veteran escaped the fire, making it out with just the underwear he was wearing, WNBC reported. The man who fondly referred to him as “the mayor” was ready to help immediately. Obermayer, a retired New York City fireman, gathered a pair of pants and a shirt for Roberts, WPVI-TV noted. Obermayer said the garb did not fit too well but was glad he could provide his neighbor with clothes, noting he knew Roberts would do the same for him.

“We had no idea it was going to blow up the way it did. It’s just amazing – people all over the country,” Richard told WNBC.

Moreover, neighbors and members of the community have pitched in to purchase new clothes for Roberts while also giving the veteran numerous gift cards.

The Black Whale Bar and Fish House in Beach Haven hosted a dinner on April 11 to fundraise for the veteran, owner Melanie Magaziner told WPVI-TV.

“There’s a lot of good people in this world, I found out. I don’t know what I would have done without them,” Roberts told WPVI-TV. “I appreciate everything. God bless you all.”