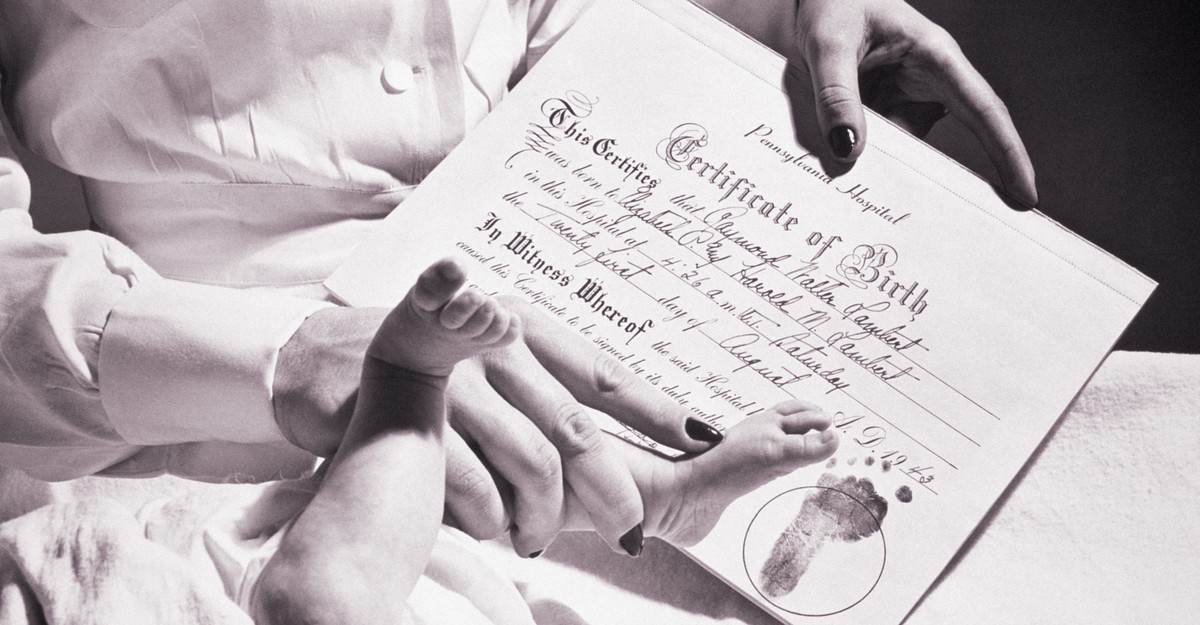 Late last month, Oklahoma became the first state in the country to explicitly prohibit a nonbinary gender marker on birth certificates. The legislation not only shows a profound disregard for the humanity of nonbinary people; it also rests on a mistaken belief that birth certificates are fixed records of neutral facts, and not subject to changing social values.

Sheila Dills, the Republican lawmaker who introduced the Oklahoma legislation, explained the rationale behind the law, saying, “We want clarity and truth on official state documents. Information should be based on established medical fact and not an ever-changing social dialogue.” In fact, the information that states record on birth certificates has fluctuated numerous times in the past century. And very often those changes came in response to a “social dialogue” in which Americans pushed back against state-imposed designations that encouraged stigmatization and discrimination.

The most prominent examples are state decisions to stop recording information about illegitimacy, adoption, and race on birth certificates. At one time, these classifications were required to be noted, meaning Americans often had to reveal these facts about themselves when applying for a job, a driver’s license, a marriage license, a passport—or in any other situation that would involve producing a birth certificate. But from 1930 to 1970, advocates for children and civil-rights proponents began to argue that such designations did more harm than good.

Garrett Epps: How birth certificates are being weaponized against trans people

In 1920, birth certificates in all states marked whether a baby was “legitimate” or not. Being born in or out of wedlock at the time was considered a salient fact about a person, one that determined, for instance, whether a child or an adult had a right to financial support or inheritance. Being labeled “illegitimate”—or worse, a “bastard”—also carried a social stigma. Because of this, in the 1920s, child-welfare advocates started making the case that states should no longer require the designation.

Writing in 1936, Lavinia Keys, of the South Carolina Department of Public Welfare, explained that she could find “no reason” that the state should record whether a birth was out of wedlock. “Certainly from a social point of view,” she continued, “it can do a great deal of harm.” During the ’30s and ’40s, as social mores continued to change, more and more states adopted Keys’s point of view. By 1960, the category had disappeared from birth records in every state.

Adoption followed a similar pattern. In 1920, an adopted child’s birth certificate would have shown that the adoptive parents were not the biological parents. By the middle of the 20th century, however, most states were issuing new birth certificates that recorded a child’s adoptive parents as the only parents, completely erasing the fact of adoption. As with illegitimacy, this change overlooked what Dills might term “clarity and truth” in the name of protecting the vulnerable from undue social stigma. Adoptees often were presumed to be the fruit of nonmarital sex; revealing that a child was adopted was as good as a public proclamation of illegitimacy.

Recording the race of a baby on a birth certificate was the last of these pillars to fall, but fall it did. During the Jim Crow era, racial classification on birth certificates was used to enforce segregation in contexts such as schooling, marriage, employment, and military service. It was also used, in states like Virginia, to force a binary Black/white racial system on multiracial communities and on groups that were neither Black nor white, such as Native Americans. Virginia’s Native people were forced to identify themselves on state documents as Black.

Beginning in the 1950s, Black doctors and civil-rights organizations began to question the classification, arguing that, as the NAACP put it at the time, “a statement of race had negligible scientific value and only served to lend a social sigma to an individual.” By 1968, the U.S. Census Bureau began issuing a “model” birth certificate for use in the states that no longer included any racial markers. Not only did every state eventually adopt this model; some, such as Massachusetts and California, passed legislation allowing people whose births had been registered before 1968 to apply for a new certificate that eliminated racial markers.

Read: A birth certificate is a person’s first possession

In all these cases, there was hardly consensus about whether and how to change birth certificates. With adoption, for example, some registrars of vital statistics objected that they were being made to issue documents that were no longer, in a strict sense, “true.” When the New York City Health Department became the first in the nation to issue race-neutral birth certificates, in 1961, the health commissioner of New Orleans responded by declaring that no one born in New York City would be able to marry in Louisiana, because the state’s law banning interracial marriage required the parties to submit a birth certificate to prove their race.

It’s not surprising that birth certificates have become a topic of debate again in 2022; many government documents are imperfect records of a population that is constantly changing. But there is a long American tradition of adapting birth documents to better suit the people they identify. Today, 15 states and the District of Columbia have added a nonbinary designation on birth certificates, and the U.S. State Department recently announced it will begin issuing gender-neutral passports.

Oklahoma’s recent law, however, carries on a darker tradition—of states like Virginia forcing people into categories as a form of discrimination, and in ways that diminish their true identities. In the past, American society has been willing to adjust birth documents to try to protect, rather than harm, those they identify. Will we do so again now?