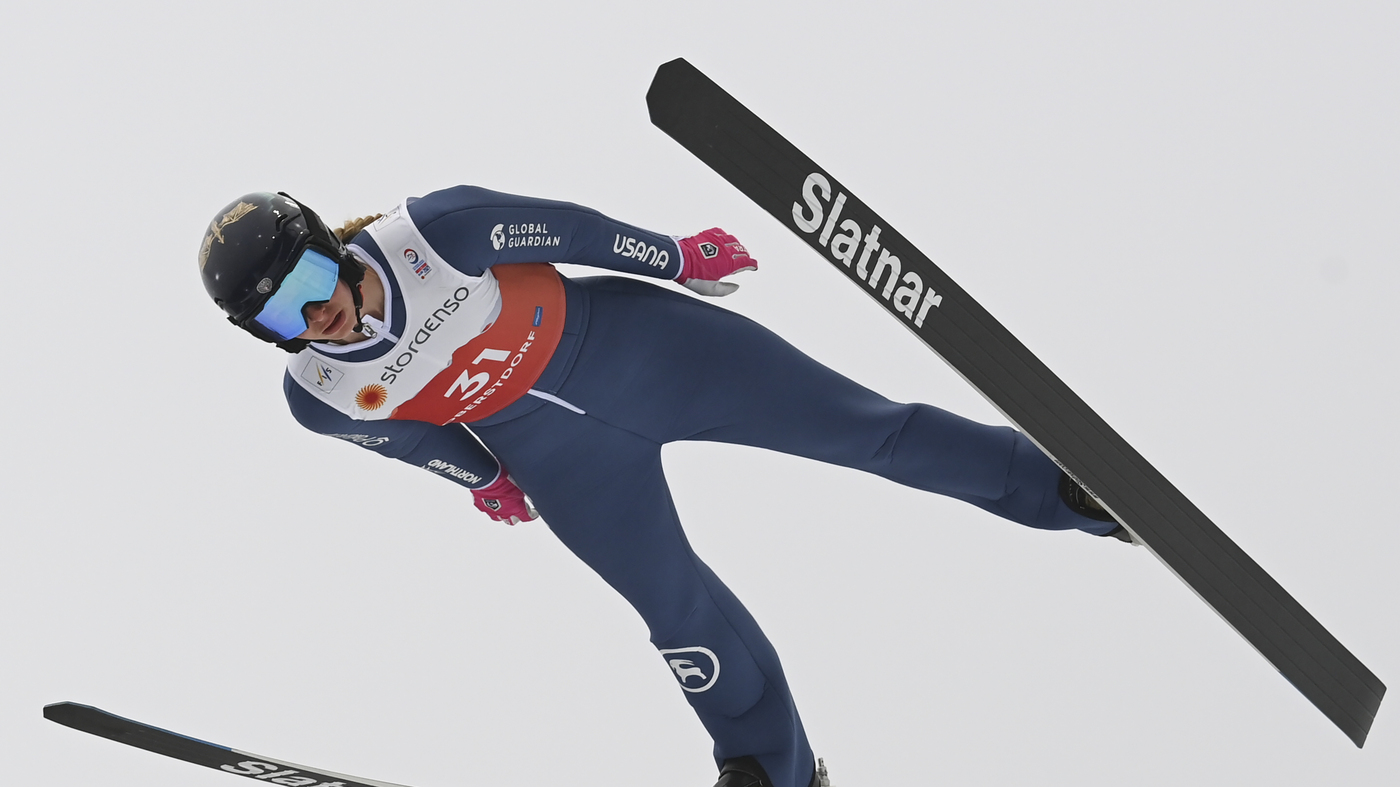 Tara Geraghty-Moats, from the U.S., soars through the air during a trial round at the Gundersen Nordic combined jumping event at the FIS Nordic Ski World Championships in Oberstdorf, Germany, on Feb. 27, 2021.

Tara Geraghty-Moats, from the U.S., soars through the air during a trial round at the Gundersen Nordic combined jumping event at the FIS Nordic Ski World Championships in Oberstdorf, Germany, on Feb. 27, 2021.

BEIJING — When it comes to Nordic combined, Tara Geraghty-Moats is considered one of the top female competitors in the world.

Nordic combined competitions involve ski jumping — during which athletes are scored on style and distance. Later, the athletes then compete in a cross-country skiing race.

“It combines two different sports I love,” Geraghty-Moats told NPR. “Ski jumping is really thrilling and it takes a lot of mental focus and attention to technical detail. Cross country skiing is really satisfying when you are skiing fast.”

It’s a sport men and women compete in around the world. But — like every Winter Olympics since Nordic combined became a fixture in 1924 — you won’t see any women fighting for gold. It remains the only Winter Olympic sport closed off to women.

This is especially notable during a year Olympic officials have touted as offering a greater balance between men’s and women’s events.

“I do really respect the work the [International Ski Federation] and the [International Olympic Committee] have done, to some extent of expanding women’s sports. But we need to be honest about the discrimination that is still happening,” Geraghty-Moats said.

Plans to add female competitors to Nordic combined in 2022 were scrapped by the IOC back in 2018.

The committee told NPR that the 2022 Winter Games program was finalized three years ago and that “it reflects our commitment to make the Olympic Games programmes more gender-balanced.” The criteria to add the women’s class of Nordic combined, which must meet standards for including a new sport to the Winter Games, wasn’t met.

But Nordic combined isn’t a new sport, Geraghty-Moats noted. Men have been competing in it for nearly 100 years.

“It’s about simply adding a women’s class of Nordic combined,” said Geraghty-Moats. “It would be so easy.”

Years ago, there was a similar battle over getting women’s ski jumping added as an Olympic event. It only made its debut at the highest level in 2014 in Sochi. Men had been competing in ski jumping for nearly a century prior to that.

During the fight to get that event opened to women, detractors claimed women’s bodies weren’t built for the sport, U.S. Nordic and Ski Jumping Sport Director Jed Hinkley told NPR.

“The science has disproved that,” he said.

That same discriminatory belief is at play when it comes to Nordic combined, according Geraghty-Moats.

“I think there are men on the [IOC] voting committee who think women shouldn’t do the sport,” she said. “It’s made up of mostly men, mostly over the age of 60 who couldn’t comprehend of women competing in Nordic combined.”

U.S. Nordic is pushing for change, too

U.S. Nordic has lobbied international sports officials to expand Nordic combined to women, according to Hinkley. But it’s incumbent on the International Ski Federation (FIS), which manages the Olympic disciplines of Nordic combined, and other national governing bodies to invest in building this sport.

The FIS said it’s up to the IOC to add any new sports to the 2026 Olympic Winter Games. The IOC says that’s still a possibility.

“It would be a real tragedy if we did not include it in the 2026 Games,” Hinkley said.

Nordic combined (a major sport in European countries) has struggled to get enough backing and support in the U.S. — even for men. At the Beijing Winter Games, there are five men competing in the event for the U.S.

Only two years ago, was the first Nordic Combined World Cup held for women.

But things are changing–especially for young girls in the sport, Hinkley said.

“Now that we have more young women and girls joining they need heroes to look up to,” he said. “Women have proven they are capable. In order to grow the sport it needs to be at the highest level — which is the Olympic Games.”

Geraghty-Moats isn’t sure that even if women’s Nordic combined is added to the 2026 Winter Games, she will be able to compete.

“Four years in an athletic career is a long time,” she said.

For now, she is content continuing to move forward in her growing career in biathlon–which uses a lot of the same skills she built participating in Nordic combined.

Even if she doesn’t compete on the Olympic stage four years from now, Geraghty-Moats said she will continue pushing officials to expand opportunities for female athletes.

“A lot of people view me as a gender equality advocate. This is not a role that I ever wanted,” she said. “I just wanted to ski. I just wanted to have the same number of competitions and have an equal shot as the men.”