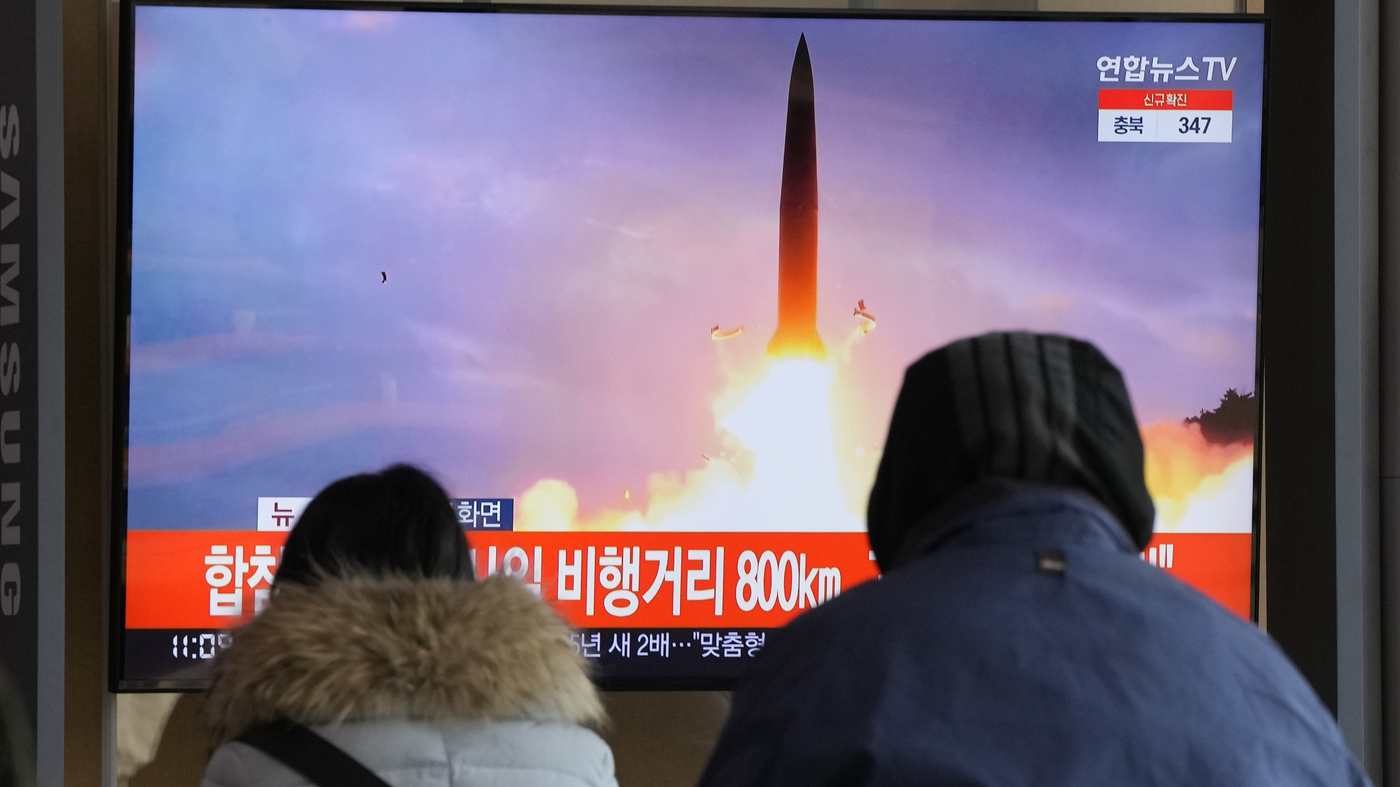 People watch a TV showing a file image of North Korea’s missile launch during a news program at the Seoul Railway Station in Seoul, South Korea, on Sunday, the North’s seventh missile test this month.

People watch a TV showing a file image of North Korea’s missile launch during a news program at the Seoul Railway Station in Seoul, South Korea, on Sunday, the North’s seventh missile test this month.

SEOUL, South Korea — North Korea on Sunday fired what appeared to be the most powerful missile it has tested since U.S. President Joe Biden took office. The launch possibly breached a self-imposed suspension on the testing of longer-range weapons, as it revives its old playbook in brinkmanship to wrest concessions from Washington and neighbors amid a prolonged stalemate in diplomacy.

The Japanese and South Korean militaries said the missile was launched on a lofted trajectory, apparently to avoid the territorial spaces of neighbors, and reached a maximum altitude of 2,000 kilometers (1,242 miles) and traveled 800 kilometers (497 miles) before landing in the sea.

Sunday’s test was the North’s 7th round of weapons launches this month. The unusually fast pace of tests indicates North Korea’s intent to pressure the Biden administration over long-stalled nuclear negotiations as pandemic-related difficulties unleash further shock on an economy broken by decades of mismanagement and crippling U.S.-led sanctions over its nuclear weapons program.

South Korean President Moon Jae-in called an emergency National Security Council meeting where he described the test as a possible “midrange ballistic missile launch” that brought North Korea to the brink of breaking its 2018 suspension in the testing of nuclear devices and longer-range ballistic missiles.

Japanese Defense Minister Nobuo Kishi told reporters it was clear that the missile was the longest-range weapon the North has tested since launching its Hwasong-15 ICBM in November 2017.

The launch came after North Korean leader Kim Jong Un chaired a ruling party meeting on Jan. 20 where senior party members made a veiled threat to lift the moratorium, citing what they perceived as U.S. hostility and threats. Kim in April 2018 declared that “no nuclear test and intermediate-range and inter-continental ballistic rocket test-fire” were necessary for the North any longer as he pursued diplomacy with then-U.S. President Donald Trump in an attempt to leverage his nukes for badly needed economic benefits.

In this photo taken last month and provided by the North Korean government on Jan. 1, North Korean leader Kim Jong Un attends a meeting of the Central Committee of the ruling Workers’ Party in Pyongyang, North Korea.

In this photo taken last month and provided by the North Korean government on Jan. 1, North Korean leader Kim Jong Un attends a meeting of the Central Committee of the ruling Workers’ Party in Pyongyang, North Korea.

In his strongest comments toward the North in years, Moon said the situation around the Korean Peninsula is beginning to resemble 2017, when North Korea’s provocative run in nuclear and long-range missile testing resulted in a verbal exchange of war threats between Kim and Trump.

Moon described the North’s latest tests as a violation of U.N. Security Council resolutions and a “challenge toward the international society’s efforts to denuclearize the Korean Peninsula, stabilize peace and find a diplomatic solution” to the nuclear standoff.

The North “should stop its actions that create tensions and pressure and respond to the dialogue offers by the international community including South Korea and the United States,” Moon said, according to his office.

Moon, who had ambitiously pushed for inter-Korean engagement, held three summits with Kim in 2018 while also lobbying to set up Kim’s first summit with Trump in 2018, where they issued vague aspirational goals for a nuclear-free Korean Peninsula without describing when and how it would occur. But the diplomacy derailed after the collapse of the second Kim-Trump meeting in 2019, when the Americans rejected North Korea’s demand for major sanctions relief in exchange for a partial surrender of its nuclear capabilities.

Japanese Chief Cabinet Secretary Hirokazu Matsuno said Sunday’s missile flew for around 30 minutes and landed in waters outside Japan’s exclusive economic zone. There were no immediate reports of damage to boats or aircraft.

The U.S. Indo Pacific Command said the United States condemns North Korea’s testing activity and calls on the North to refrain from further destabilizing acts. It said the latest launch did not “pose an immediate threat to U.S. personnel, territory, or that of our allies.”

Experts say the North could halt its testing spree after the start of the Beijing Winter Olympics next week out of respect for China, its major ally and economic lifeline. But there’s also expectation that the North could significantly up the ante in weapons demonstrations once the Olympics end in February to grab the attention of the Biden administration, which has been focusing more on confronting China and Russia over its conflict with Ukraine.

“North Korea is launching a frenzy of missiles before the start of the Beijing Olympics, mostly as military modernization efforts. Pyongyang also wants to boost national pride as it gears up to celebrate political anniversaries in the context of economic struggles,” said Leif-Eric Easley, a professor at Ewha University in Seoul.

“It wants to remind Washington and Seoul that trying to topple it would be too costly. By threatening stability in Asia while global resources are stretched thin elsewhere, Pyongyang is demanding the world compensate it to act like a ‘responsible nuclear power,'” Easley added.

North Korea has justified its testing activity as an exercise of its rights to self-defense and threatened stronger action after the Biden administration imposed fresh sanctions following two tests of a purported hypersonic missile earlier this month.

While desperate for outside relief, Kim has showed no willingness to surrender the nuclear weapons and missiles he sees as his strongest guarantee of survival. Analysts say Kim’s pressure campaign is aimed at forcing Washington to accept the North as a nuclear power and convert their nuclear disarmament-for-aid diplomacy into negotiations for mutual arms-reduction.

State media said Friday that Kim visited an unspecified munitions factory producing a “major weapons system,” and that the workers pledged loyalty to their leader who “smashes with his bold pluck the challenges of U.S. imperialists and their vassal forces.”