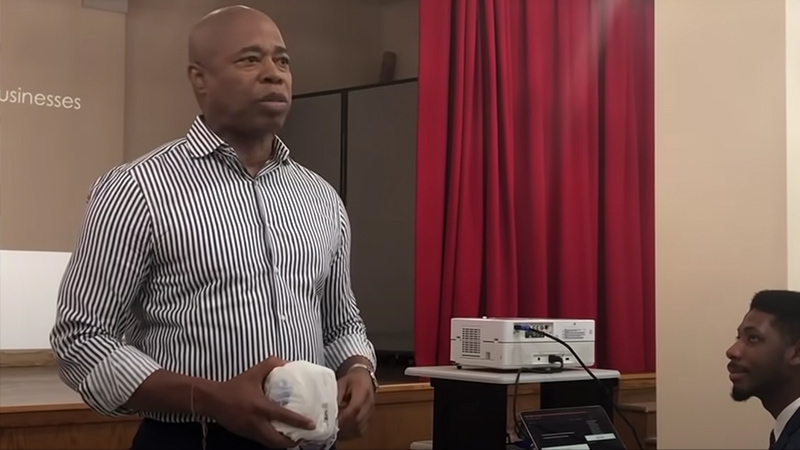 During a live press conference at City Hall on Friday, Democrat New York City Mayor Eric Adams was asked about his use of the words “cracker” and “negro” back in 2019.

In a YouTube video, Adams can be seen addressing the Harlem Business Alliance and describing his ascent from a police officer to a police captain, and eventually a politician.

“Every day in the police department, I kicked those crackers’ ass,” Adams said. “I became a sergeant, a lieutenant, and a captain, you know the story.”

Next, the NYC Mayor told the crowd he’d rather be smoking weed all day and growing a beard than working as a politician, before saying, “Man, these negroes that wake up every day and don’t like themselves, they’re gonna beat me up.”

He continued, “The people who say, ‘Where’s our real black leaders, why does Eric think he should be mayor?’ Well, negro, you run!”

When a reporter on Friday asked the mayor to provide context for his use of the racial slurs, Adams said, “I’ll definitely apologize. Inappropriate comments should not have been used. Someone asked me a question using that comment and, playing on that word, I responded in that comment. But clearly, it is a comment that should not be used, and I apologize not only to those who heard it, but to New Yorkers because they should expect more from me and that was inappropriate.”

Asked to explain what he meant when he said he was kicking the asses of white officers, Adams said, “My fight in the police department was fighting racism throughout my entire journey, and I was serious about fighting against that.”

The exchange takes place around the 29:00 mark.

Imagine the media backlash that would take place if a white Republican said similar comments about any minority group.