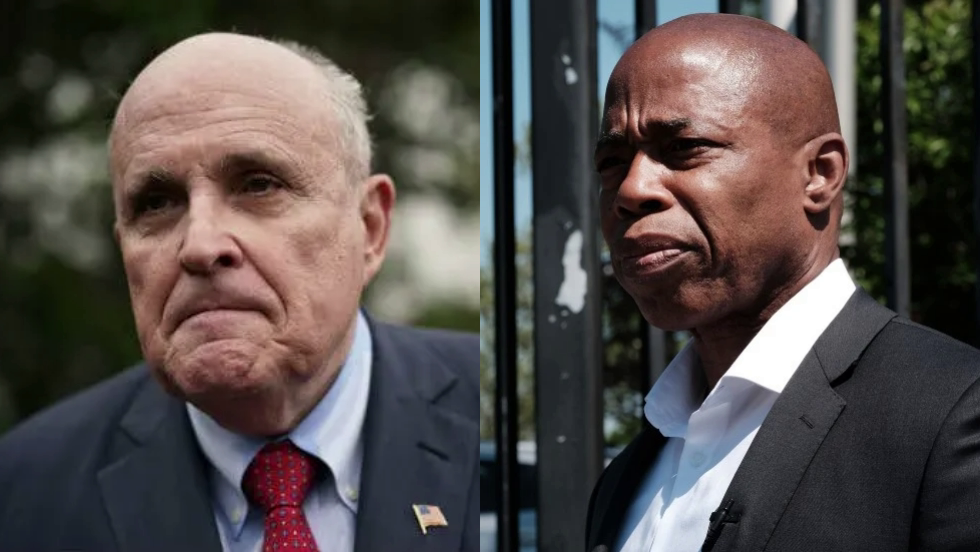 New York City Mayor Eric Adams said during an unrelated press conference Tuesday that former New York City Mayor Rudy Giuliani should be reminded “that falsely reporting a crime is a crime” after video was released that called into question Giuliani’s claim that he was “hit very, very hard” by an employee at a Staten Island, N.Y., supermarket.

“I think the district attorney, he has the wrong person that he’s investigating. To falsely report a crime is a crime. If that video wasn’t there, then this person would’ve been charged with punching the former mayor,” said Adams, referencing a surveillance video from the New York ShopRite where Giuliani had said he felt as though “a boulder hit” him.

“Well, when you look at the video, the guy basically walked by and patted him on the back,” Adams added.

The video shows Giuliani barely moving after a ShopRite employee’s hand makes contact with his back. The employee is then seen saying something to the former mayor.

Giuliani commented Monday that the ShopRite video of the incident is “probably is a little deceptive,” after describing the alleged attack a day earlier.

“All of a sudden, I feel this, ‘Bam!’ on my back,” Giuliani said Sunday, adding that he nearly fell down from the blow.

The ShopRite employee, identified as 39-year-old Daniel Gill, was detained after the Sunday incident, according to the New York Police Department, and has been released ahead of his scheduled hearing on August 17.

Giuliani said he believed Gill hit him because of his “pro-life” stance on abortion, with the incident coming just two days after the Supreme Court overturned Roe v. Wade, which established the constitutional right to an abortion.