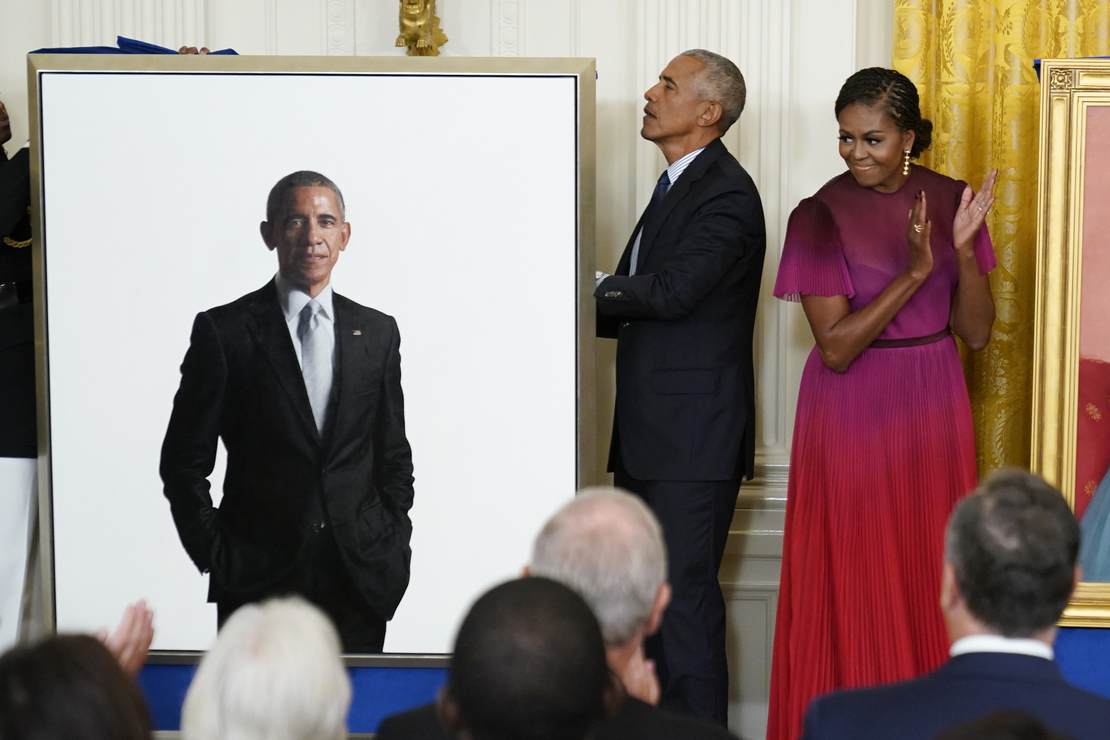 The White House Historical Association oversees the White House fine art collection that has added portraits of every president and most of the first ladies. The official portraits of Barack and Michelle Obama were added Wednesday as they were unveiled at the White House. Celebrating the viewing of the portraits was a room full of Obama and Biden people. The speeches delivered by both Obamas turned decidedly political and signaled the beginning of the former president’s return to the campaign trail on behalf of Democrats.

The White House Historical Association, a nonprofit organization founded in 1961 by first lady Jacqueline Kennedy and funded through private donations and sales of books and an annual Christmas ornament, helps manage the White House portrait process. Since the 1960s, the association has paid for most of the portraits in the collection.

Congress bought the first painting in the collection, of George Washington. Other portraits of early presidents and first ladies often came to the White House as gifts.

There is a bit of irony to be noted – Joe Biden ran on bringing back normal to the White House, whatever that is supposed to be. However Barack Obama is far from a “normal” former president. He never really left the political stage after he moved out of the White House, and neither did Michelle. Both have remained activists. It is not “normal” for an unveiling ceremony for official presidential and first lady portraits to be spiced up with political comments. That is what happened, though, with the Obama speeches.

Obama clearly played to the cameras in the room as he gushed over how great of a president Joe Biden is and egged on those in the room to applaud and even give Biden a standing ovation. It was weird. It was deliberate. There have been stories published lately about tension between Team Obama and Team Biden. Obama meant to tamp down any talk of divisions and wants to play a role in getting Democrats out to vote in the November 2022 midterm elections. Democrats are nervous about what may happen on November 8 and they desperately hope to hang on to their small margins in the House and the Senate. Will that likely happen? Probably not. I still think some kind of red wave will happen and Republicans will take back the House and it’s possible that Democrats may lose the Senate, too. But, definitely the House.

You may remember that during the first midterm election in Obama’s first term, Democrats took a “shellacking”, as Obama himself put it. I’m sure he wants to save his party from that humiliation again in November. It’s a tough order, though, given how deeply unpopular Joe Biden is and what an absolute failure he and his administration have been. There is little that Biden can boast about and vulnerable Democrat candidates don’t dare be seen on a stage with dazed and confused Joe. But, Obama? They’ll crawl on broken glass to get on a stage with Barack Obama.

Obama campaigned for candidates in the 2020 cycle and helped out Joe by campaigning for him in Georgia, Michigan and Pennsylvania. Biden won those three states by razor-thin margins. Typically, former presidents go off and enjoy their lives outside of politics. The trend now is for no one to ever leave politics, they hang around forever. So, Obama is going to even get involved in midterm elections. Not just some obvious elections but also some state elections. He starts as the headline speaker for a fundraiser in New York City for the Democratic Senatorial Campaign Committee (DSCC) on Thursday and next week will headline a fundraiser for the Democratic Congressional campaign Committee (DCCC). Then the campaigning begins.

Obama will also publicly appear with Democratic congressional and gubernatorial candidates, as well as his party’s nominees in some secretary of state races in key general election battlegrounds, a source with knowledge of the former president’s political plans confirmed to Fox News.

That a former president will personally weigh in on down ballot races for secretary of state – who serve as the top election officials in their states – points to the importance those officials may play in the 2024 presidential election amid a political climate where a portion of the electorate continues to believe that the 2020 presidential election was riddled with fraud.

The source, in confirming news first reported by CNN, indicated that the number of campaign events involving Obama is still being planned and that the former president will only appear in races where he can be most effective in helping Democratic candidates running in the midterms.

It sounds like Obama is taking a page from George Soros’ playbook. Soros is donating millions of dollars to far-left progressive Democrats in District Attorney races across the country. Obama is going to focus on secretary of state elections, apparently.

When Michelle Obama spoke, she went heavy on her personal biography and what a wonderment that it is that a girl from the south side of Chicago could end up living in the White House. That is exactly the American Dream, that anyone can accomplish anything in America, but she didn’t bother to connect those dots. Oh well. And, she was sure to work in some not so subtle digs at Trump. Trump didn’t host the Obamas at the White House when their portraits were finished and that is why Biden did it. She also told Trump to move on, in a not so subtle way.

Tradition holds that the sitting president invites his immediate predecessor back to the White House to unveil his portrait, but Donald Trump broke with that custom and did not host Obama. So, Biden scheduled a ceremony for his former boss.

Mrs. Obama said the tradition matters “not just for those of us who hold these positions but for everyone participating in and watching our democracy.”

In remarks that never mentioned Trump but made a point as he continues to challenge his 2020 reelection loss, she added: “You see the people, they make their voices heard with their vote, we hold an inauguration to ensure a peaceful transition of power … and once our time is up, we move on.”