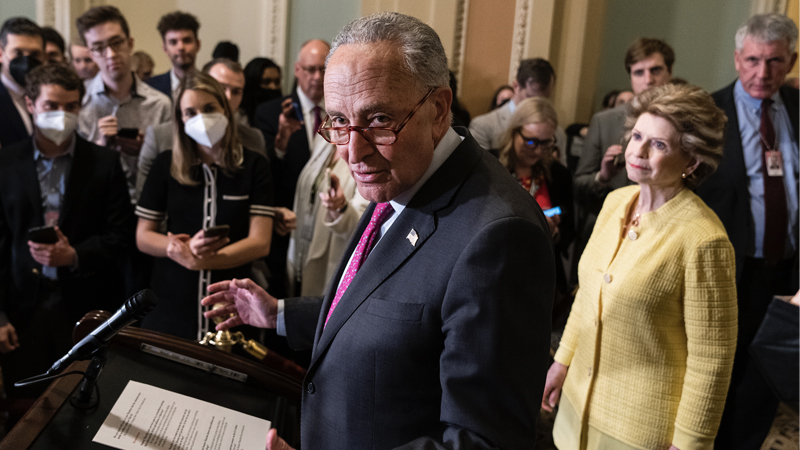 The “only way” to tackle rampant inflation in America is to raise taxes on the middle class and eliminate tax cuts enacted by former President Donald Trump, according to Senate Majority Leader Chuck Schumer (D).

“If you wanna get rid of inflation, the only way to do it is to undo a lot of the Trump Tax Cuts and raise rates,” Schumer said during a press conference at the Capitol building on Tuesday.

“No Republican is ever going to do that, so the only way to get rid of inflation is through reconciliation,” he added, referring to a procedure whereby Democrats would force through legislation with their narrow simple majority in the Senate.

Schumer’s explanation is ignorant at best and dishonest at worst, as there are several ways to reduce inflation.

In fact, just raising taxes on Americans would not actually tackle the inflation problem at all due to the sheer size of the national debt and its accompanying interest.

As economist Milton Friedman noted: “Inflation is always and everywhere a monetary phenomenon in the sense that it is and can be produced only by a more rapid increase in the quantity of money than in output.”

The Federal Reserve could raise borrowing interest rates to the current official inflation rate – 8.5% as of March – to encourage savings and reduce economic demand, but that would likely push the economy into a recession.

The Fed could also shrink its balance sheet – a process known as quantitative tightening – to reduce the money supply, which would ease inflationary pressure.

“There’s one source of inflation. The actual definition of inflation is an expansion of the money supply,” economist and EuroPacific Capital CEO Peter Schiff told Fox News host Tucker Carlson last month, adding that inflation is effectively a hidden tax imposed upon the American people because the dollar’s spending power is diminished over time.

“It’s the Federal Reserve that’s been expanding the money supply,” Schiff continued. “They’ve called it ‘quantitative easing’, but they keep creating dollars, and it’s the U.S. government that spends those dollars into circulation. And as it does that, the value of each dollar goes down. And so the price of everything you buy with dollars goes up.”

“The middle class is going to feel the inflation tax the hardest. Their wages are not going to go up nearly as much as the cost of living,” he added.

So Schumer’s proposal is to add on even more economic pain upon the middle class by hiking their taxes even more in an inflationary environment while doing nothing to address the out-of-control government spending that caused the inflation to begin with.