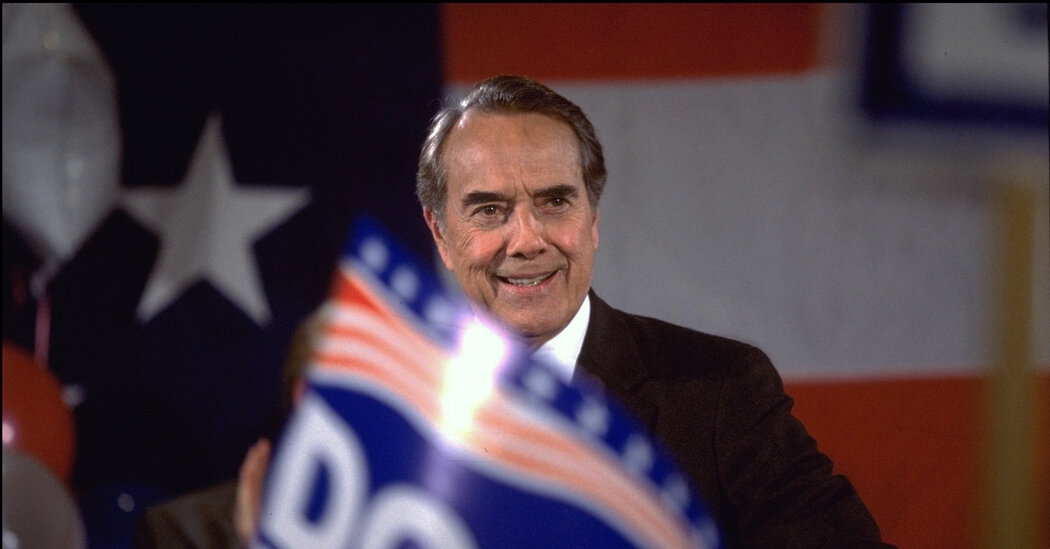 Early in the 1996 race for the White House, the senior leadership of Bob Dole’s presidential campaign noticed something that troubled us: It seemed no matter how carefully we crafted his talking points, Senator Dole would go off script.

So, we considered the possibilities: Maybe at 72 years of age, Mr. Dole’s eyesight was the problem. But when increasingly larger type didn’t have the desired effect, we decided somebody had to go to the Senate majority leader and raise the delicate question of whether he could see the words on the papers we handed to him.

That somebody was me. As his press secretary, it was my unenviable task to ask a man who was first elected to Congress in 1960, the year I was born, if his eyes were giving out.

Mr. Dole pondered my question for a moment and replied: “No, I can see just fine. I can’t hear worth a damn. But my eyes are fine.”

Like a lot of things I’d hear him say across the year and the hundreds of thousands of miles I spent at his side as his campaign press secretary, it took me awhile to understand there was more in his answer than his trademark dry humor.

Mr. Dole, who died on Sunday at age 98, could hear perfectly well. It was we in his campaign team who had trouble listening.

Over and over again, in speech after speech, he told his campaign he was going to say what he wanted. We thought that was a problem. Looking back, I think it was a treasure.

See, Mr. Dole didn’t want to be packaged like a product or traffic in the staged outrage that today would be praised for generating attention, the currency of politics. It could be that his resistance to our demands to recite talking points or perform anger hurt his campaign. But if so, I now see that as an indictment of what politics was becoming in 1996 and what politics has become today.

It’s in unscripted moments that politicians reveal the most about themselves. While many politicians show themselves to be cynical, cruel or inauthentic in those off-script moments, Mr. Dole instead revealed a rare empathy.

For example, in 1996, Gov. Pete Wilson of California, a Republican, had won re-election two years prior with a tough law-and-order message, so we organized a trip to a jail in Los Angeles, with Mr. Wilson in tow, for a tour and a news conference.

It was a perfectly staged opportunity for Mr. Dole to say something bashing the miserable offenders he had just seen in the lockup. Instead, his first comment was to wonder aloud whether some of the men in those cells had ever been touched by the hand of someone who loved them.

Nobody had written that note of humanity for Mr. Dole. I’m not sure it was even picked up by the press. But it sprang from a compassion that he found hard to switch off for political purposes.

The traditions of the Senate were also real for Mr. Dole and more important than cheap political theater.

In 1995, President Bill Clinton’s nomination of Dr. Henry Foster for Surgeon General stirred anger among social conservatives. I urged Mr. Dole to personally reject and help defeat the nomination as a good way to score points going into the Republican primary season.

Mr. Dole declined. The maneuver might have been good politics, he reasoned, but it would violate committee protocol and disrespect his fellow Kansan, Senator Nancy Landon Kassebaum, who was presiding over the Foster hearings.

He actually saw value in respecting the Senate as an institution. At the time, I thought that was funny. Since then, after witnessing the Senate trample on so many of its norms and traditions, it is clear that Mr. Dole had a point.

Some of his other funny ideas caused him problems. In 1996, political humor that respects both opponents and voters had not yet disappeared. But it was losing ground to insult and abuse.

Mr. Dole, arguably the greatest American practitioner of the laconic phrase since Calvin Coolidge, often found that his humor was lost on reporters a fraction of his age.

Once, on the campaign plane, a reporter asked Mr. Dole a stock question: What was the one thing he wanted every voter to know about him?

He could have answered like a politician and spouted a bumper sticker slogan or summoned a tear. Instead, he dismissed the silly question with a simple “Beats me.”

Yet, he didn’t take it personally. He rarely vilified a reporter for doing the job of reporting. Once almost left for dead on a battlefield in World War II, he had seen worse than a bad story or even a lost election.

True, Mr. Dole lost in 1996 and he had no illusions about who would take the blame. The capsule summary of that campaign casts him as a weak candidate.

But by then, American politics was already on the path to the polarized and poisonous place we occupy today. If Bob Dole’s authenticity and reluctance to engage in artifice or demonizing his opponents were weaknesses, does that say more about him or about what politics was becoming?

Bob Dole was principled and even partisan, yes. But he leavened his fighting spirit with humility, humor and respect. If that made him weak, American politics would be stronger with more weakness.