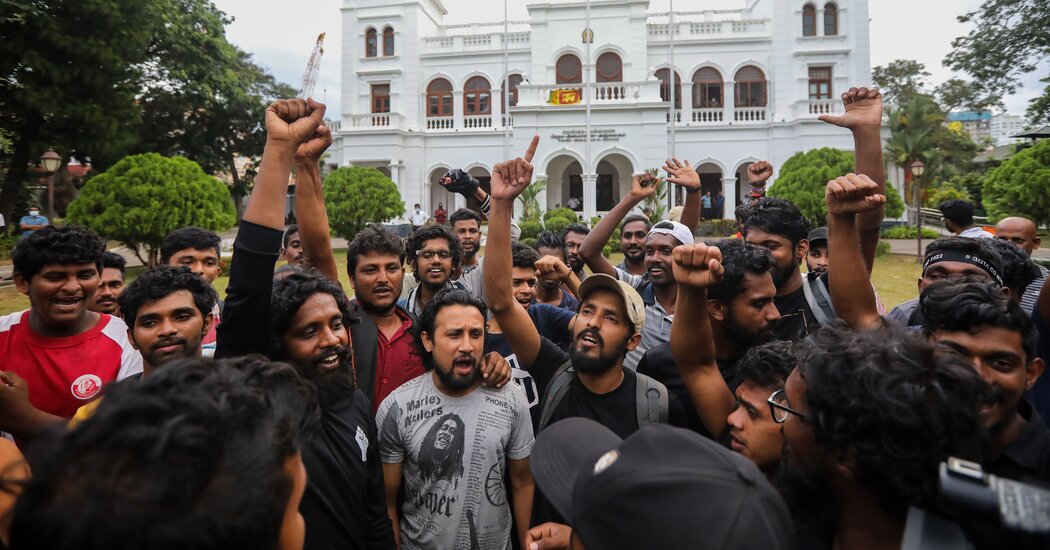 As a Sri Lankan, watching international news coverage of my country’s economic and political implosion is like showing up at your own funeral, with everybody speculating on how you died.

The Western media accuse China of luring us into a debt trap. Tucker Carlson says environmental, social and corporate governance programs killed us. Everybody blames the Rajapaksas, the corrupt political dynasty that ruled us until massive protests by angry Sri Lankans chased them out last month.

But from where I’m standing, ultimate blame lies with the Western-dominated neoliberal system that keeps developing countries in a form of debt-fueled colonization. The system is in crisis, its shaky foundations exposed by the tumbling dominoes of the Ukraine war, resulting in food and fuel scarcity, the pandemic, and looming insolvency and hunger rippling across the world.

Sri Lanka is Exhibit A. We were once an economic hope, with an educated population and a median income among the highest in South Asia. But it was an illusion. After 450 years of colonialism, 40 years of neoliberalism, and four years of total failure by our politicians, Sri Lanka and its people have been beggared.

Former President Gotabaya Rajapaksa deepened our debt problems, but the economy has been structurally unsound across administrations. We simply import too much, export too little and cover the difference with debt. This unsustainable economy was always going to collapse.

But we are just the canary in the coal mine. The entire world is plugged into this failing system and the pain will be widespread.

Here’s how the past few months have felt.

I have a car, which has now turned into a giant paperweight. Sri Lanka literally ran out of gas, so my kids asked if they could play inside it. That’s all it is good for. Getting fuel required waiting for days in spirit-crushing queues. I gave up. I got around by bus or bicycle. Most of the economy stopped moving at all. Now fuel has been rationed, but irrationally. Rich people get enough fuel for gas-guzzling S.U.V.s while working taxis don’t get enough and owners of tractors struggle to get anything at all.

The rupee has lost almost half its value since March and many goods are out of stock. You learn to react at the first sign of trouble: When power cuts started a few months ago my wife and I bought an expensive rechargeable fan; days later, they were sold out. When fuel cuts became dire we immediately bought bicycles, and the next day their price went up. Staples like rice, vegetables, fish and chicken have soared in price.

Many Sri Lankans are going on one meal a day; some are starving. Every week brings to my door a new class of people reduced to begging to survive.

I earn in dollars as a writer online so when the rupee depreciated and was devalued, I effectively got a raise. We can afford solar and battery backups to keep the power on. But many others are at the mercy of blackouts. People couldn’t work as factories and other workplaces shut down and children couldn’t sleep in the heat. The first major protests kicked off in March after a full night of this, when it seemed that the entire country was sleep-deprived and furious.

Last month, protesters breached the presidential residence and prime minister’s office, and it was the one thing that felt good. Along with thousands of ordinary Sri Lankans, I got to see inside these colonial-era fortresses for the first time. It was spontaneous, safe and respectful. Couples went on dates there, parents brought their kids. I saw people singing in the president’s house, a mother dancing with her toddler, people swimming in the pool. I walked around a hall lined with plaques bearing the names of British colonizers, which seamlessly became the names of our own presidents.

At the prime minister’s office, someone played the piano and a shirtless man draped in a Sri Lankan flag slept on a couch. Four guys had set up a game of carrom and were flicking the discs around. A child joyfully cartwheeled across the lawn outside, and a community kitchen served rice to anyone that was hungry. It was a beautiful sight in a space where elites had nipped on canapes before, surrounded by armed guards. It felt hopeful.

But what had briefly felt like true democracy didn’t last. Parliament merely replaced President Rajapaksa with one of his cronies, Ranil Wickremesinghe, who has been prime minister a handful of times but lost his parliamentary seat in 2020. He has turned the military on demonstrators and arrested protesters and trade unionists. It’s all been “constitutional,” eroding faith in the whole liberal democratic system.

Sri Lanka — like so many other countries struggling for solvency — remains a colony with administration outsourced to the International Monetary Fund. We still export cheap labor and resources, and import expensive finished goods — the basic colonial model. The country is still divided and conquered by local elites, while real economic control is held abroad. The I.M.F. has extended loans to Sri Lanka 16 times, always with stringent conditions. They just keep restructuring us for further exploitation by creditors.

And as much as the West blames Chinese predatory lending, only around 10 to 20 percent of Sri Lanka’s foreign debt is owed to China. The majority is owed to U.S. and European financial institutions, or Western allies like Japan. We died in a largely Western debt trap.

But big economies are suffering too. Europe faces energy uncertainty, Americans are struggling to fill their tanks, the United States may already be in recession, its asset bubble threatens to pop and British families face food worries.

It’s going to get worse: The I.M.F. just warned that the likelihood of a global recession is mounting. As economies collapse, Western loans simply won’t get repaid and poor nations will crash out of the dollar system that props up Western lifestyles. Then, even Americans won’t be able to money-print their way out of trouble. It’s already begun. Sri Lanka has started settling loans in Indian rupees while India is buying Russian oil in rubles. China may buy Saudi oil with yuan.

The Sri Lankan uprising that threw out our leaders is called the Aragalaya. It means “struggle.” It’s going to be a long one, and it’s spreading across the world.