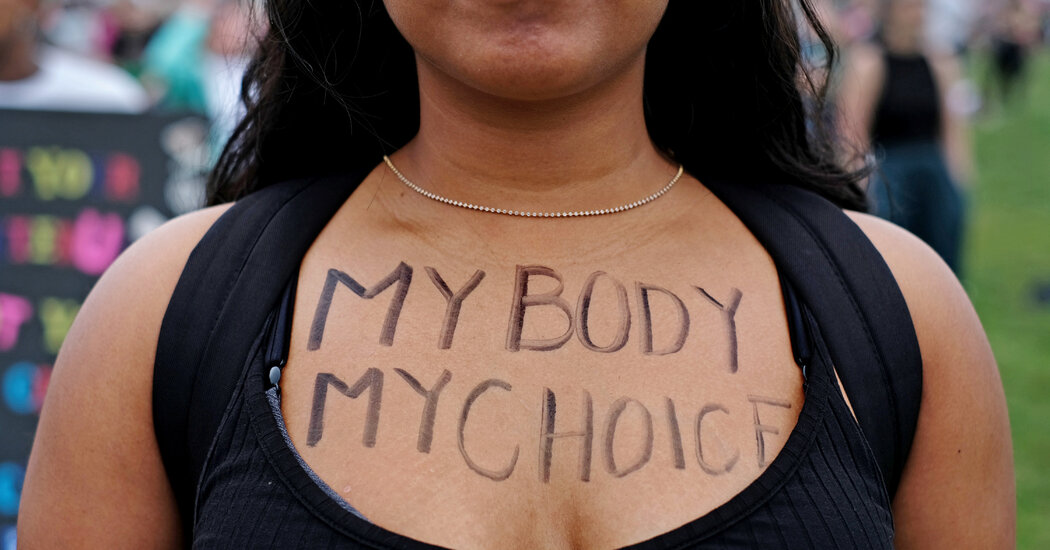 One day I hope to become a mother. But for now I have sex just because I like it. Sex is fun.

For the puritanical tyrants seeking to control our bodies, that’s a problem. This radical minority, including the right-wing faction on the Supreme Court, probably won’t stop at banning abortion. If we take Justice Clarence Thomas at his word — and there’s no reason not to — the right to contraception could be the next to fall. Why? Because many in this movement are animated by an insatiable desire to punish women who have sex on our own terms and enjoy it.

State laws restricting or banning abortion are an attack on American women who decide whether, when and how to have children. They are part of a movement intended to curb the hard-won freedom to pursue careers and joys outside the confines of wifehood and motherhood. Some Republicans have said just this, and it’s important that we believe them.

Take J.D. Vance, the G.O.P. nominee for Senate in Ohio, who apparently thinks women like me belong at home, not writing opinions in national newspapers: “If your worldview tells you that it’s bad for women to become mothers but liberating for them to work 90 hours a week in a cubicle at The New York Times or Goldman Sachs, you’ve been had,” Mr. Vance wrote recently on Twitter.

Charlie Shepherd, an Idaho state representative, said he voted against using federal funds to increase early childhood education because “any bill that makes it easier or more convenient for mothers to come out of the home and let others raise their child, I don’t think that’s a good direction for us to be going.”

One tweeter said the quiet part out loud: “If you’re scared for your daughter’s future, maybe focus on raising her to not be a slut.”

The End of Roe v. Wade

Commentary by Times Opinion writers and columnists on the Supreme Court’s decision to end ​​the constitutional right to abortion.

A radical minority of Americans wants to make an example of women who have sex outside marriage, women who compete with men in the workplace, women who are independent and who cannot be controlled. That’s part of why birth control is likely their next target. That’s why the same movement that claims to care about babies is so uninterested in the health and lives of the people who bring them into this world, and so hostile to the policies that would support those children and their families after they are born.

In the America where I came of age, I was told my life was worth more than my ability to have babies. And my sexuality was nothing to be ashamed of.

I read Audre Lorde, who years earlier had explored the power of the erotic, a resource that, she wrote, “lies in a deeply female and spiritual plane” within each of us as women. I learned about the Black feminists who proclaimed that “choice is the essence of freedom” and saw reproductive rights as essential to the fight against white supremacy and its insidious attempts to control the lives and bodies of Black people. “Oh yes, we have known how painful it is to be without choice in this land,” a 1989 declaration signed by a group of prominent Black women in support of abortion rights read. “We who have been oppressed should not be swayed in our opposition to tyranny, of any kind.”

At the large and diverse public suburban New York City schools I attended in the early 2000s, we weren’t shamed or taught that abstinence was the only righteous path. The focus was on how to practice sex safely and responsibly, and with consent. We were taught that our sexuality was part of our humanity, and that it belonged to us alone.

Later, when I was a student at the University of Michigan, the movement for sex positivity was thrilling and liberating. We learned that pleasurable sexual experiences between consenting adults of all genders and orientations were to be celebrated. Every year the school held a safe-sex fair, handing out condoms and prescriptions for Plan B. One year the students erected a giant replica of a vulva, tall enough to walk through, complete with a working bell at the top where the clitoris would be. That used to be a fun memory for me. Now what I think about is how I had more rights then, over a decade ago, than I have today.

One reason I practice safe sex is thanks to that comprehensive, humane sex education. Another is the basic self-respect that comes from growing up in an America that, while imperfect, has come to view women as equal citizens and human beings.

It’s clear that a radical minority in the United States — from the right-wing zealots on the Supreme Court to a group of sexually illiterate politicians who clearly weren’t paying attention in health class — sees us differently.

Just one example is Yesli Vega, a Republican congressional candidate in Virginia who dismissed concerns about women being forced to carry pregnancies that result from rape, saying in audio recordings leaked recently that it wouldn’t surprise her if it were harder to become pregnant from rape because “it’s not something that’s happening organically” and rapists do it “quickly.”

This movement has relegated the women of this country to second-class citizenship, stripped us of autonomy over our own bodies and denied us essential health care. Now the people behind it are betting that our sense of hopelessness will paralyze us, allowing them to carry out their repressed vision of America without resistance.

But there are more of us than there are of them. That’s especially true if American men recognize that their way of life is also under attack. Men also have sex for pleasure. This is not just a women’s issue.

In the days after Roe fell, I have been wondering if the men I’ve dated are reflecting on how they too have benefited from the rights I and other American women enjoyed for the past half-century. What might their lives be like if I hadn’t had access to emergency contraception or birth control? Would they have the jobs, the marriages, the children, the freedom they do today?

They’re good men, and I’m happy for them. I’d also like to ask: Will I see you at the next protest? Join us.