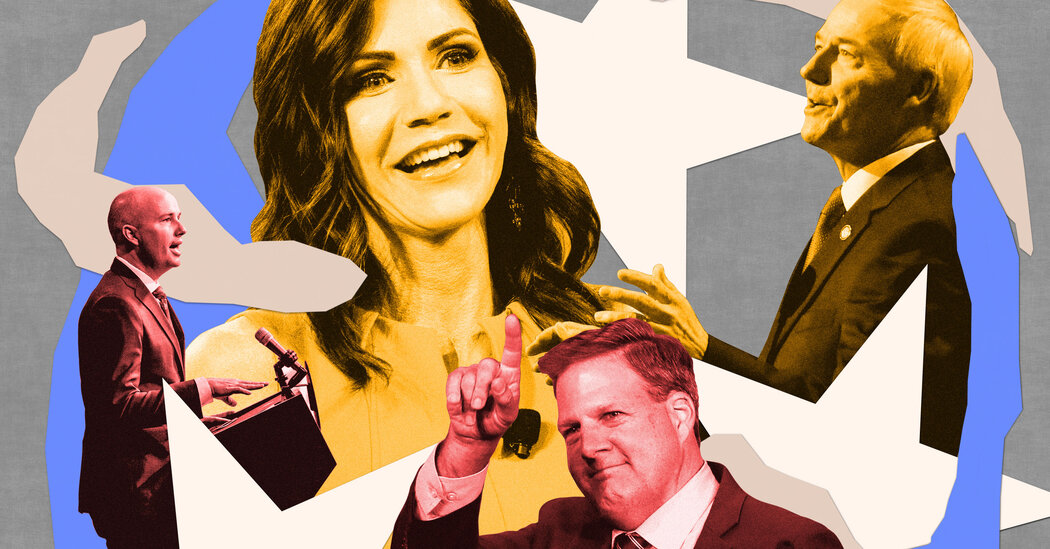 Americans may conclude from this that there is a striking, and perhaps unfortunate, relationship between extremism and political success.

But Republicans aren’t hoping for a red wave in the midterms only because norm-thrashing or scandal sells. The truth is much more banal — yet also important for parties to internalize and better for politics generally: In states across the country, Republican governors are delivering real results for people they are physically more proximate to than federal officials.

Now, it’s true that the party that controls the presidency nearly always gets whipped in midterm elections, and inflation would be a huge drag on any party in power. And it’s also true that among those governors are culture warriors like Gov. Ron DeSantis of Florida and Gov. Greg Abbott of Texas.

But people too often overlook the idea that actual results, especially ones related to pocketbook issues, can often be as important as rhetoric. Looked at that way, lots of Republicans — some with high public profiles, and some who fly below the radar — are excelling.

Opinion Debate
Will the Democrats face a midterm wipeout?

Start with the simplest measure: popularity. Across the country, 13 of the 15 most popular governors are Republicans. That list does not just include red states. In fact, blue-state Republican governors like Phil Scott of Vermont, Charlie Baker of Massachusetts and Larry Hogan of Maryland are among the most popular.

There are many reasons that G.O.P. governors seem to be succeeding. It’s true that governors can’t take credit for everything. Sometimes they just get lucky. But they do make policy choices, and particularly those made by governors since the start of Covid have made a difference.

For example, take a look at the most recent Bureau of Labor Statistics data on unemployment. In the 10 states with the lowest rates as of June, eight were led by Republican governors. Several governors who don’t make frequent appearances in national news stand out, like Pete Ricketts of Nebraska, Chris Sununu of New Hampshire, Spencer Cox of Utah and Phil Scott of Vermont. Their states have unemployment rates under 2.5 percent, and of the 20 states with the lowest unemployment rates, just four are led by Democrats.

States with Republican governors have also excelled in economic recovery since the start of the pandemic. Standouts in this measure include Mr. Abbott and Doug Ducey of Arizona.

These results reflect many things — some states have grown and others have shrunk, for example — but are at least in part a result of policy choices made by their elected leaders since the start of the pandemic. For example, governors like Kristi Noem in South Dakota often rejected lockdowns and economic closures.

Republican governors were also far more likely to get children back to in-person school, despite intense criticism.

Covid policy doesn’t explain everything. Fiscal governance has also made a difference. The Cato Institute’s Fiscal Report Card on America’s governors for 2020 (the most recent edition available), which grades them on tax and spending records, gives high marks to many Republicans. Nearly all of the top-ranked states in this report have Republican governors, like Kim Reynolds of Iowa or Mr. Ricketts. (Some Democratic governors also ranked highly, including Steve Sisolak of Nevada and Roy Cooper of North Carolina.) Some have made their mark with employer-attracting tax cuts; others with spending controls; others with a mixture.

Most states mandate a balanced budget, so taxing and spending policies are important for fiscal stability. Low taxes tend to attract and keep employers and employees. Restrained budgets help ensure that taxes can be kept low, without sacrificing bond ratings, which may matter if debt-financed spending is needed in a crisis or to try to stimulate businesses to hire more.

Asa Hutchinson of Arkansas has cut taxes for individuals, reduced the number of tax brackets and cut the corporate income tax rate. Mr. Sununu has restrained spending, vetoed a payroll tax proposal and cut business taxes. Brian Kemp of Georgia, by contrast, actually paused some tax cuts that had been scheduled — and focused almost exclusively on spending restraint, issuing a directive for state agencies to generate budget cuts and keeping 2020 general fund growth to a tiny 1 percent.

Even in blue Vermont, Mr. Scott has constrained general fund spending — despite being an odd duck out among governors in that he is not constrained by a balanced-budget amendment — to rise by an annual average of just 2.4 percent between 2017 and 2020, and he has also cut taxes. He signed a bill to ensure that the federal tax reform instituted under Mr. Trump and limiting state and local tax deductions wouldn’t result in Vermonters getting hammered. He has also cut individual income tax rates, reduced the number of tax brackets and resisted new payroll taxes in favor of voluntary paid leave plans for private-sector employers.

Republicans who have a big impact on the day-to-day lives of many Americans — unlike, say, Representative Kevin McCarthy or certainly Mr. Trump, and in terms of the quality of state economies, the local job market and education — are delivering. In our federalist system, a lot of power still sits with states and not the federal government and determines much about citizens’ lives.

This is a big reason that Republicans are well-positioned heading into the midterms. It should be a warning to Joe Biden and Democrats — and to some of the culture warriors. Cable-news combat over whatever the outrage of the day is may deliver politicians the spotlight. But sound economic policy and focusing on the job, not theatrics, is delivering basic day-to-day results Americans want, need and will reward.