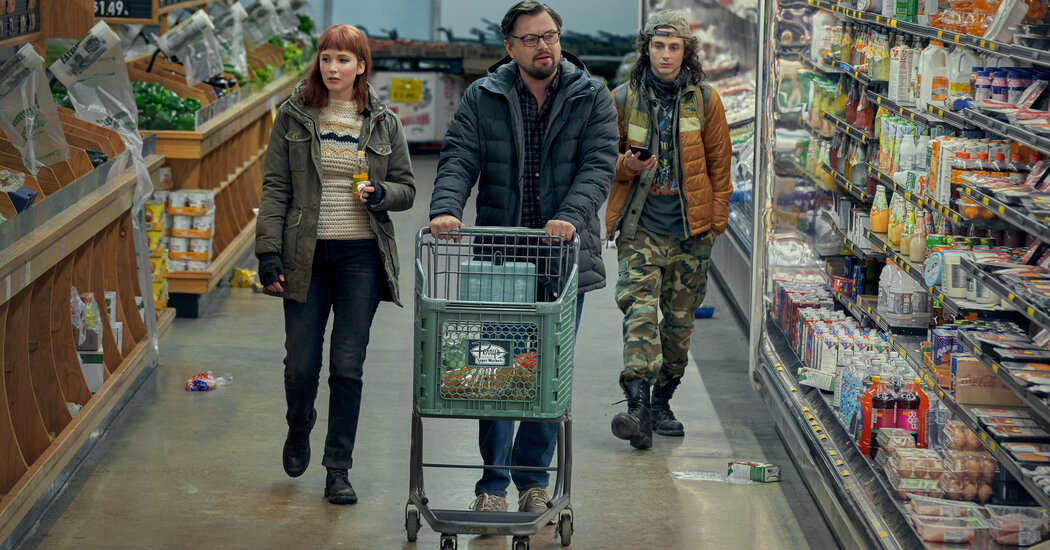 The new movie “Don’t Look Up,” about a collision between a planet-killing comet and a frivolous America, is something of a critical failure — its score on RottenTomatoes.com is currently only 55 percent fresh — but a clear cultural success. In a world where it’s hard for non-superhero movies to hardly make a ripple, it has broken a Netflix viewing record and launched an array of movie-critic arguments and pundit takes — some of them politically unpredictable, including both left-leaning critiques and right-leaning admiration.

Officially the movie is an allegory about climate change, a conceit that its director, Adam McKay, has emphasized in online sparring with its critics. “If you don’t have at least a small ember of anxiety about the climate collapsing (or the U.S. teetering),” McKay tweeted recently, “I’m not sure ‘Don’t Look Up’ makes any sense. It’s like a robot viewing a love story. ‘WHy ArE thEir FacEs so cLoSe ToGether?’”

Art, though, has a way of escaping the intentions of its creators. McKay’s tweets notwithstanding, his comet scenario is a lousy allegory for the climate challenge, for reasons painstakingly elaborated by New York Magazine’s Eric Levitz in one of the best responses to the movie as a would-be policy intervention. But the pandemic that arrived before production started turned out to be a better fit for the allegory — a fast-moving and unexpected threat rather than a grinding long-term challenge. And ultimately “Don’t Look Up” is most effective when it’s just a movie about that parenthetical in McKay’s tweet — the idea of a “teetering” America, with the specific existential threat almost incidental to the portrait of systemic failure.

This is the biggest reason, I suspect, that the movie is a commercial hit and conversation fodder even for people who dislike it: Because it opens one of the widest lenses on American decadence since the years when “The Wire” and “The Sopranos” were both on HBO.

Yet I’m still one of the critics who thought the movie failed in the end, because its impulse to indict everyone, from TV news to social media, is in tension with its desire to deliver a pious message about Listening to Science. The latter impulse ensures that its satire is gentlest when it takes on the expert class, the academic-industrial complex. And its plot ultimately turns on a single terrible decision by a populist president, the systemic critique sacrificed to ideological point-scoring.

But since the movie is almost the comprehensive portrait of decadence we need, I’m going to offer some script doctoring, and give you the cut of “Don’t Look Up” that might have been, had somebody hired me to consult. Here goes:

Act 1: The comet is discovered by amateur astronomy geeks who comb telescope footage the government collects but doesn’t bother to examine. Their findings are hyped by a mix of doomsday preppers and tech bros, while academic authorities dismiss the claims as misinformation and Twitter censors users who insist the comet is going to hit Earth.

Act 2: A group of Harvard astronomers confirm the comet’s dire trajectory, and suddenly the media turns on a dime and begins hyping the threat. But the president, a right-wing populist aiming for re-election, prefers to postpone dealing with it, so she hypes an obscure Bible-college astronomer who thinks the chance of impact is under 10 percent.

Act 3: After protests roil the country, the president reverses course and announces a massive nuclear strike. However, the head of NASA, a media darling, insists that blowing up the comet will rain down fragments and kill too many people, and you need a more limited strike — the subject of his own dissertation, as it happens — that knocks it off course. Fox News vilifies him, but the mainstream media insists his strategy is simply Science and no serious person could oppose it. So the United States tries his plan — and it fails completely, because his dissertation was actually based on fraudulent experiments that never replicated outside his lab.

Act 4: Now the president orders the full blow-it-up strike, but it fails as well — because most of the nukes don’t work, the military having failed to inspect its arsenal because that part of the budget was spent hiring TikTok influencers to do a new recruitment pitch for Gen Z. In desperation, the government turns to an Elon Musk-style tech wizard, whose Great Bore drill promises to deliver a warhead into the heart of the comet. Unfortunately he supervises the mission himself, and it goes fatally awry when he gets distracted by a Twitter flamewar.

Act 5: Out of options, part of America pretends the comet isn’t coming, while another part joins a cult that holds mass repentance ceremonies for white patriarchy’s sins. At the last minute, a collection of Chinese drones ascend to meet the comet and dismember it, letting its pieces fall into the Pacific to be mined by Chinese deep-sea robots — but a shower “accidentally” hits the continental United States, knocking out our infrastructure and leaving the world’s former superpower in the dark.

Roll credits, in Chinese. I’ll see you all at the Oscars.