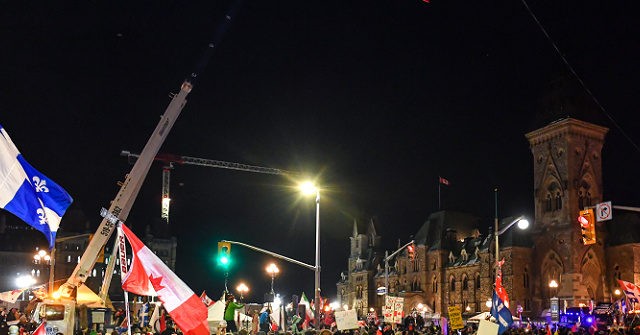 Canada’s capital city of Ottawa has declared a “state of emergency” as police have begun to crack down on the “Freedom Convoy” by cutting off fuel and supply lines.

In a press release on Sunday as the protest over the country’s vaccine mandates and coronavirus restrictions headed into its second week, Ottawa Mayor Jim Watson said that the protesters pose a “safety and security” threat to residents of Ottawa:

Declaring a state of emergency reflects the serious danger and threat to the safety and security of residents posed by the ongoing demonstrations and highlights the need for support from other jurisdictions and levels of government. It also provides greater flexibility within the municipal administration to enable the City of Ottawa to manage business continuity for essential services for its residents and enables a more flexible procurement process, which could help purchase equipment required by frontline workers and first responders.

The Ottawa police simultaneously issued a statement on Sunday, accusing the protesters in downtown Ottawa of exhibiting disruptive and unlawful behavior.

IMPORTANT: Anyone attempting to bring material supports (gas, etc.) to the demonstrators could be subject to arrest. Enforcement is underway. #ottawa #ottnews pic.twitter.com/tp4e5d2xe1

“The Ottawa Police Service and its partners worked through the night to reduce the impacts of demonstrators in the downtown core, respond to calls for service, and improve neighborhood safety,” the department said.

“Overnight, demonstrators exhibited extremely disruptive and unlawful behavior, which presented risks to public safety and unacceptable distress for Ottawa residents,” it added. “We continue to advise demonstrators not to enter Ottawa, and to go home.”

Among several charges, the police allege that protesters employed excessive use of fireworks, red light violations, and “driving through a no-truck route.”

A citizen journalist sent me this video that seems to show police seizing fuel from truckers. More reports to come — I’m on the streets right now.#TruckerConvoy https://t.co/8hpC710hZK pic.twitter.com/5PEwZcTRq6

The Ottawa police also warned that people aiding the protesters with supply lines or fuel will be arrested as videos poured over the internet of officers seizing fuel that supporters had brought in to assist the truckers.

“Anyone attempting to bring material supports (gas, etc.) to the demonstrators could be subject to arrest. Enforcement is underway,” the police tweeted.

How the Canadian Fascist Regime deals with a peaceful legal protest:

This is 3rd world shit

Since the “Freedom Convoy” launched in Canada last week, the protests have spread to other provinces. In Alberta, for example, truckers formed a blockade at the U.S. border while tow companies refused to aid police.

Premier Scott Moe of the Canadian province Saskatchewan said last Wednesday that Canadians need to have a conversation on when the coronavirus restrictions will end.

“It’s time for us to have an honest conversation about Covid and our path forward,” he said. “What I’m about to say will sound radical to some and some quite frankly are not going to like it, but eradicating Covid is not realistic and Covid zero is not achievable. But normalizing Covid or living with Covid most certainly is.”