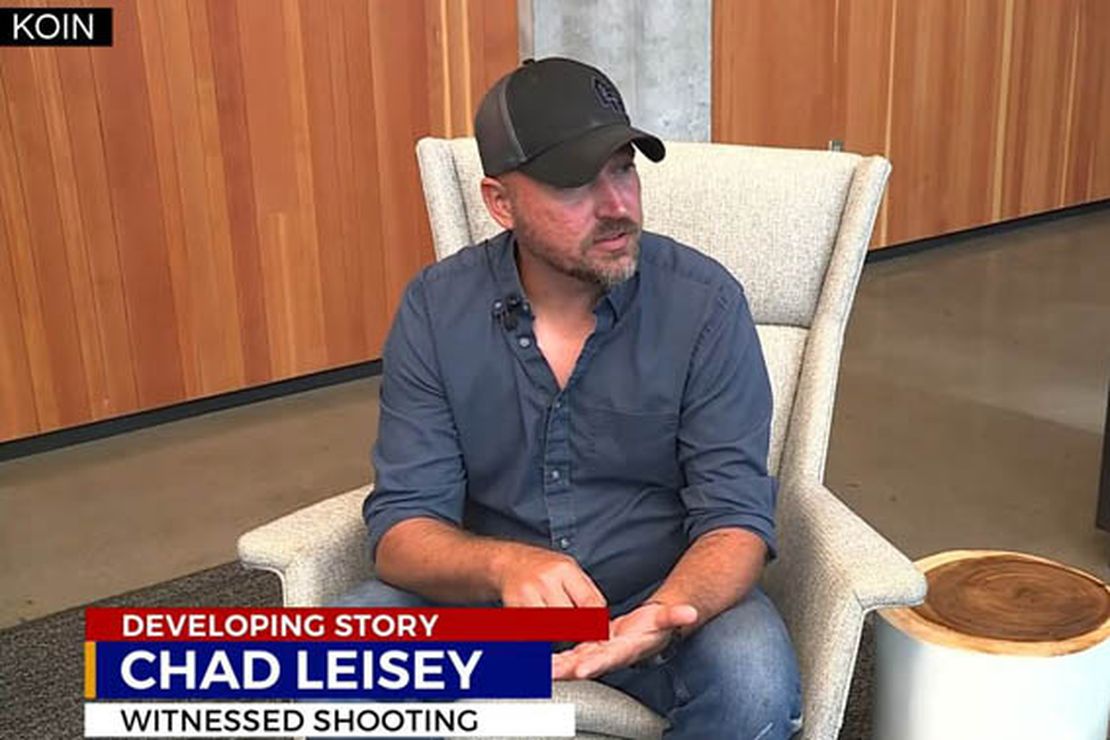 Last month, Portland Mayor Ted Wheeler declared a state of emergency over the increased gun violence in the city. The city’s homicide rate is up 207% in the past two years. One city resident named Chad Leisey has seen the need for that up close. He has witnessed two shootings in the past two months. The most recent happened last Friday night.

“At nine, we started to walk over to the Inferno for the pizza place,” said Leisey. “As we were walking down the street, we got right outside of Mary’s Club and that’s when we heard rapid fire from an automatic machine gun or something.”

Leisey says about 40 people in the immediate area started running. He and his girlfriend joined them until, just feet away, a man in front of them was shot in the chest. A former firefighter, Leisey stopped to perform first aid.

“Told him we need to put compression on it, stay and sit there, wait for the ambulance. His friend said he was going to take him to the hospital. Told me he could have him at the hospital before 911 would even pick up,” said Leisey.

The man Leisey stopped to help made it to the hospital and apparently survived. Two other people were shot in the same incident and one of them, a 19-year-old, was killed. Two months ago, Leisey witnessed another shooting as he was walking home from a restaurant around 2 am. A white car pulled up and a man inside yelled at someone and started firing. Leisey said he called 911 and waited on hold for “about five minutes.” Leisey wasn’t shy about who he thinks is to blame for the increased violence:

“Our leadership is failing. The Portland leadership is creating this problem,” said Leisey. “Your odds of being shot and killed randomly is super high. Like I said, twice in two months, I’ve seen it. That’s unacceptable. It’s crazy, it’s scary.”…

There was another wild scene in Portland Saturday night. Police were called to the scene of an accident and found a Nissan Altima flipped upside down in the middle of a residential neighborhood. There were three adults and one child inside. Luckily, no one was seriously injured, but after police arrived things got so out of hand that police had to call for backup and wound up charging one of the occupants with a bias crime. It started when one of the people in the car tried to walk away from the accident:

The suspected driver resisted arrest and the two other passengers attempted to “physically intervene,” according to a Portland Police Bureau press release.

Amid the hubbub, neighbors began to crowd the officers and the situation became “hostile.” So the police resorted to a show of force and made a “code 3″ call for immediate assistance.

In all, 16 cops swarmed the scene, sirens blaring. Despite numerous attempts to deescalate the situation, police said, they became the victims.

The driver, 35-year-old Sasha Lundy, threatened to assault two female cops due to their race and gender, according to the release.

It turned out Sahsa Lundy was the driver and she was charged with driving under the influence and also with a bias crime because of her threats against the two female officers. A witness to the scene said he didn’t understand why things go so out of hand.

He said the crowd that gathered seemed to be interfering with the police who were trying to detain several people involved.

“The police I thought did a great job, I don’t know why everybody got wild. Like I said, this was cut and dry, this was a car accident,” Lund said.

There’s video of the very early parts of this incident when police were trying to restrain a man walking away from the overturned car:

Here’s video of the situation right after police respond to the crash from someone who lives nearby, you see police trying to detain people and them resisting, also yelling at police to stop and get someone medical treatment. @KATUNews pic.twitter.com/RlYZjoisGl

The reaction here reminds me of the scenes in New York I wrote about earlier today. In any case, here’s the KOIN 6 interview with Chad Leisey. Hopefully he’ll get out of Portland before he gets shot himself.