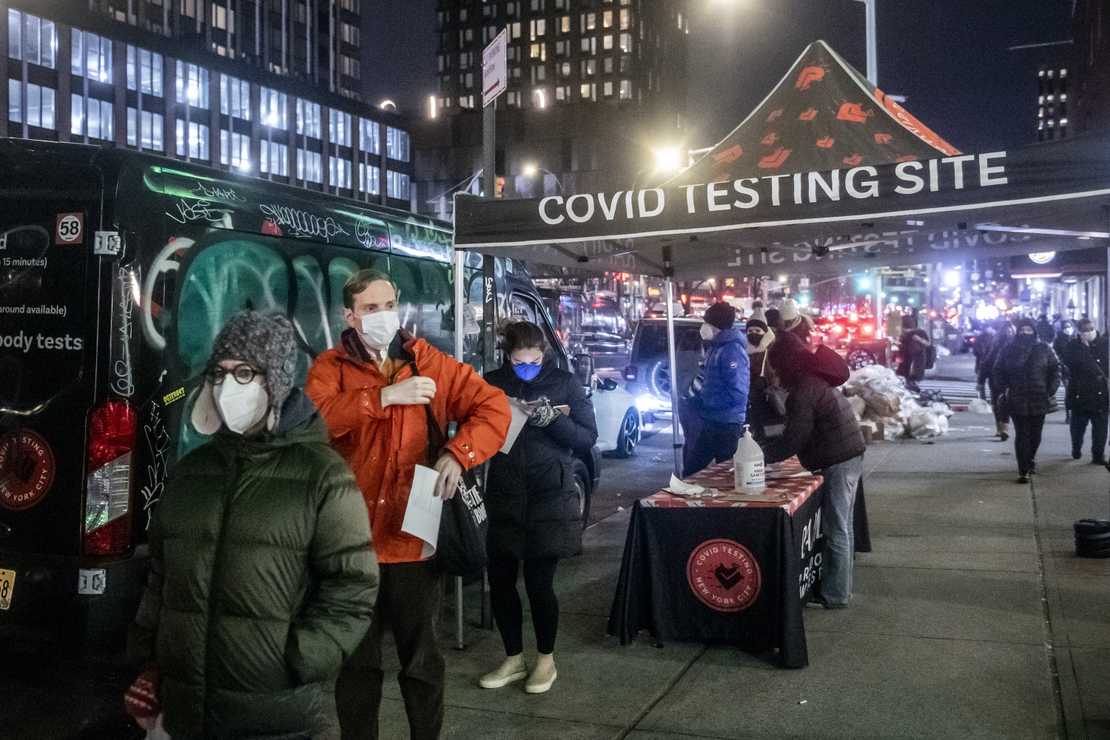 A hopeful note on which to end another lousy year. Maybe — maybe? — we’re emerging from the tunnel at long last.

South Africa appears to have passed the peak of its omicron variant-driven fourth coronavirus wave, the country’s cabinet announced Thursday, adding that there was only a “marginal increase” in fatalities, which remained low compared to previous spikes…

The country’s medical system has capacity to provide “routine health services,” authorities said in a statement Thursday, adding that the government would roll back certain pandemic control measures…

Even as South African authorities warned that omicron still poses a threat, they lifted restrictions such as a late-night curfew. Restaurants and bars will be allowed to serve alcohol past 11 p.m., and larger indoor gatherings are permitted, so long as there is social distancing. A mask mandate in public areas is still in place.

The data speaks for itself. As steeply as cases rose, they’ve fallen nearly as steeply:

“It was a flash flood more than a wave” is how one South African expert described it.

Average daily deaths looked to have peaked a few days ago at 67. While that represents roughly double the number since Omicron began spreading in late November…

…it’s a small fraction of the deaths South Africa was seeing during Delta’s peak. In July the country topped out at 419 daily COVID fatalities, a bit more than six times as many as during the height of the Omicron wave.

Might South Africa’s data be a fluke, though? They have a young population and high levels of natural immunity. Maybe the mildness of the Omicron wave there won’t translate into a mild wave elsewhere.

But maybe it will:

While data is skewed by reduced holiday reporting, there’s increasing signs #Omicron wave in London may be peaking. The huge wave has occurred, so far, with only a small rise in hospital admissions requiring mechanical ventilation. New York City may be about 2 weeks behind London pic.twitter.com/WIqFkB16f9

One analyst put together a graph-heavy thread on London’s outbreak that’s worth your time. It’s true that hospitalizations are up, but read the fine print and you’ll see how misleading that is without context. Although cases have gone stratospheric, hospital admissions are up *a little.* And serious hospitalizations requiring ICU care have barely budged.

The most dramatic decoupling is seen in the number of COVID ICU inpatients; several weeks into a surge in cases, the number of patients in mechanical ventilation beds has increased only slightly. pic.twitter.com/jddQ7FEqVc

South Africa’s data also confirms that hospitalizations from Omicron are milder: “The scientists found that the patients required, on average, four days in hospital, or about half the time needed earlier in the pandemic.”

And so we wait. Will the U.S. see the same dynamic as South Africa and London, with cases going vertical but hospitalizations and deaths lagging far behind? Early indications are that we will. This country recorded 580,000 confirmed cases yesterday, nearly double the pre-Omicron peak last winter. Best estimates of the total number of active infections at the moment are mind-boggling, needless to say. “We’re talking somewhere up to maybe 10 million people,” one epidemiologist told WaPo when asked how many Americans currently have COVID. “Maybe not all of them are contagious yet. Crazy numbers. Crazy, crazy numbers.”

But despite the head-spinning case counts, hospitals aren’t near capacity. The peak of last winter’s wave produced 300,000 daily cases and ended up hospitalizing 140,000 people at one point in January. Currently, despite cases almost two times that amount, the U.S. is averaging 80,000 hospitalizations. There’s been no increase in average daily deaths over the past three weeks as the new variant exploded either. We may yet have a small surge in January as some infected with Omicron this week eventually progress to terminal illness, but there’s no reason at the moment to expect the sort of death toll we experienced a year ago.

“Omicron will likely be quick. It won’t be easy, but it will be quick. Come the early spring, a lot of people will have experienced COVID,” epidemiologist Bill Hanage told WaPo. Herd immunity at last circa April? Maybe?

The lingering mystery about the variant that scientists are trying to solve is how much its mildness is due to something inherent in its genome and how much is due to so many people having acquired a degree of immunity via vaccination or prior infection at this stage of the pandemic. Is the new virus weak or are we strong, or both? Increasingly the answer looks to be “both.” New data from several studies conducted on animals confirms what was found a few weeks ago by the University of Hong Kong: For whatever reason, Omicron doesn’t spread well in the lungs. It reproduces efficiently in the upper respiratory tract, which explains why it’s so transmissible. But when researchers exposed rodents to the virus in the new studies, they found that “those infected with Omicron had less lung damage, lost less weight and were less likely to die.”

Immune cells in the lungs can overreact, killing off not just infected cells but uninfected ones. They can produce runaway inflammation, scarring the lung’s delicate walls. What’s more, the viruses can escape from the damaged lungs into the bloodstream, triggering clots and ravaging other organs…

Many cells in the lung carry a protein called TMPRSS2 on their surface that can inadvertently help passing viruses gain entry to the cell. But Dr. [Ravindra] Gupta’s team found that this protein doesn’t grab on to Omicron very well. As a result, Omicron does a worse job of infecting cells in this manner than Delta does. A team at the University of Glasgow independently came to the same conclusion…

Dr. Gupta speculated that Omicron evolved into an upper-airway specialist, thriving in the throat and nose. If that’s true, the virus might have a better chance of getting expelled in tiny drops into the surrounding air and encountering new hosts.

As a matter of evolutionary logic, it makes sense that the virus would exchange some degree of virulence for a greater degree of transmissibility. Its goal is to reproduce, not to kill its host. If it can gain an advantage in doing that by sticking to the upper respiratory tract, so much the better. “It’s all about what happens in the upper airway for it to transmit, right?” said Gupta to the Times. “It’s not really what happens down below in the lungs, where the severe disease stuff happens.” The bottom line: The new COVID may have mutated to become a “a bothersome upper-respiratory infection,” as Anthony Fauci recently speculated, at least in those with some prior immunity. Raise a glass to that possibility on New Year’s Eve.