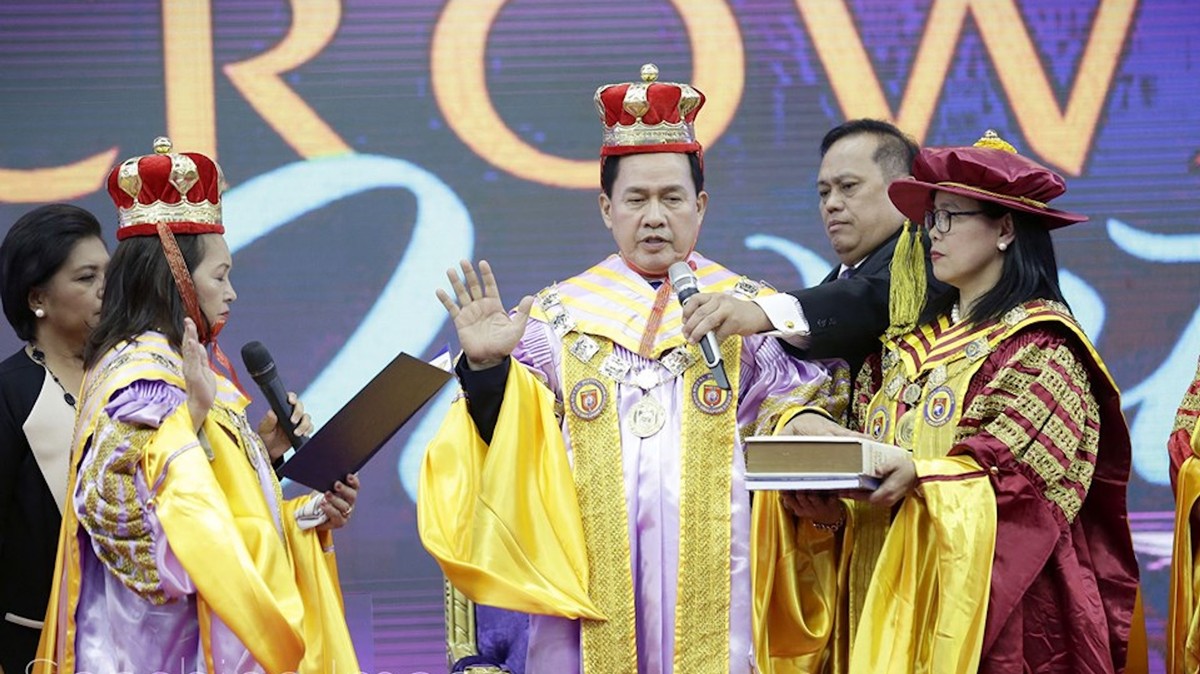 He calls himself “The Appointed Son of God,” maintains a chorus of young women to sing his praises during his televised church services, once ordered an earthquake to stop, and lent Philippine president Rodrigo Duterte his private jet and helicopter for his 2016 election campaign.

Now, Apollo Quiboloy, leader of the church known as Kingdom of Jesus Christ, The Name Above Every Name (KOJC), faces sex trafficking charges for allegedly sneaking members into the United States, where some were forced to solicit money for a bogus charity, and others to attend to Quiboloy’s needs, including to have sex with him.

U.S. prosecutors have charged Quiboloy and several top administrators of his Philippines-based megachurch with orchestrating a sex trafficking operation that coerced girls and young women to have sex with him under threats of “eternal damnation,” the U.S. Department of Justice (DOJ) said in a statement on Nov. 18.

The new superseding indictment added Quiboloy and five top church administrators to three other KOJC officers already charged in the same case in early 2020. Except for Quiboloy, the defendants are all women. Quiboloy’s media arm has yet to return VICE World News’ request for comment.

Quiboloy, 71, and two of his co-defendants allegedly recruited women and girls with ages ranging from 12 to 25 to work as personal assistants, called “pastorals,” according to the indictment. The victims were then made to prepare Quiboloy’s meals, clean his houses, give him massages, and “were required to have sex” with him in what was called “night duty.” The indictment specified five female survivors, three of whom were minors when the alleged sex trafficking began.

The survivors were told that night duty was “God’s will,” a “privilege,” and a “necessary demonstration of commitment” to Quiboloy as the “Appointed Son of God,” according to the indictment. When they hesitated, the defendants allegedly told them that they “had the devil in them and risked eternal damnation.”

Quiboloy allegedly threatened and physically abused survivors who attempted to leave KOJC, did not show up for night duty, or who communicated with other men, while he lavishly rewarded those who pleased him. Whenever survivors managed to escape, Quiboloy allegedly used his sermons and broadcast platforms to accuse them of sexual promiscuity, saying they faced eternal damnation.

The DOJ said the defendants allegedly trafficked church members into the U.S. through fraudulently obtained visas, and then forced them to solicit donations for a “bogus charity” that ended up being spent on “church operations and the lavish lifestyles of its leaders.” Members who succeeded at raising funds for KOJC were forced into sham marriages or to obtain fraudulent student visas so they could stay in the U.S. and continue soliciting for the megachurch, the DOJ added.

Investigations revealed these activities may have begun in 2002 and continued until at least 2018. Three of the defendants remain at large, including Quiboloy, who is believed to be in the Philippines. The indictment states he has residences in the Philippines and in California, Nevada, and Hawaii in the U.S.

Quiboloy was briefly detained at the Honolulu airport in 2018 after federal agents found $350,000 in cash stuffed in socks aboard his private jet, as well as gun parts. He was also accused of rape, child abuse, and human trafficking by a former follower in Davao City, Philippines in 2019. He denied the allegations.

Quiboloy’s KOJC claims to have 7 million members around the world and is headquartered in Davao City, the southern bailiwick of Philippine president Duterte, who regards Quiboloy as a longtime friend and spiritual adviser.

Successful televangelists like Quiboloy wield considerable power in the Philippines, and many politicians solicit their support in hopes of getting “block votes” from their followers.