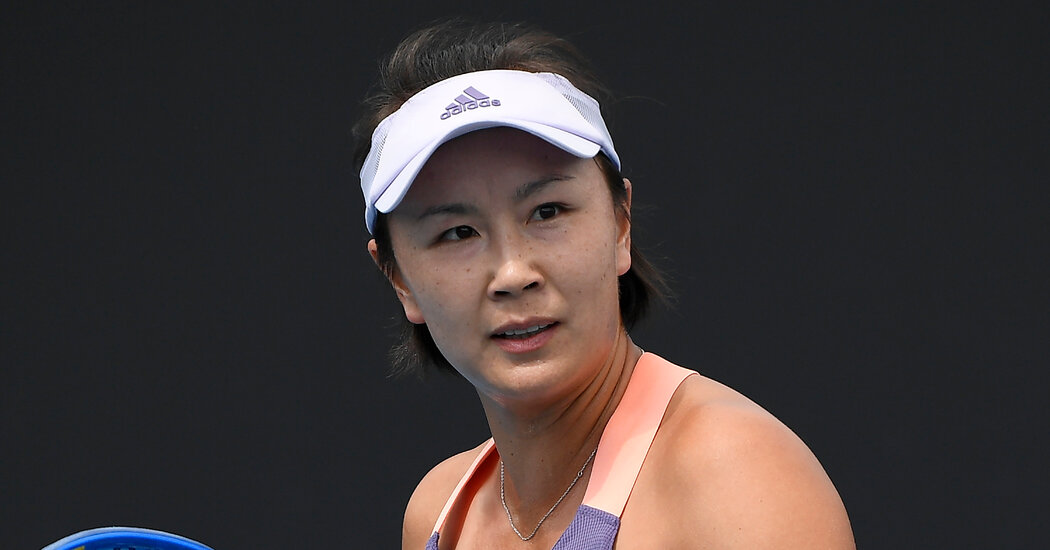 Peng Shuai, the Chinese tennis player who largely disappeared from public life after making sexual abuse accusations against a political official in November, held a private meeting with Thomas Bach, the president of the International Olympic Committee, in Beijing over the weekend.

The two had dinner on Saturday at the Olympic Club and were joined by Kirsty Coventry, the former chair of the Athletes’ Commission and an I.O.C. member, according to a statement released on Monday by the I.O.C.

The statement did not address Peng’s sexual assault allegations or the possibility of Bach pressing for an investigation of Peng’s claims, but it said that Peng was at the Winter Olympics and attending events, including a curling match between China and Norway on Saturday night.

The revelation of the meeting might do little to satisfy critics who question whether Peng has been speaking freely in her sporadic and seemingly highly orchestrated public appearances over the past few weeks.

Mark Adams, a spokesman for the I.O.C., declined to say on Monday whether the committee believed Peng’s initial claim that she had been sexually assaulted. She made the claim in November on a verified account on a Chinese social media platform, but has since recanted. Adams also refused to say whether the committee believed she was speaking under duress from government officials.

What to Know About Peng Shuai

The Chinese tennis star Peng Shuai disappeared from public view for weeks after she accused a top Chinese leader of sexual assault.

“I don’t think it’s a judgment for the I.O.C. to make — we are a sporting organization,” Adams said at the I.O.C.’s daily news conference in Beijing.

He noted that the organization had remained in constant communication with Peng in recent weeks to ensure she was physically safe.

“I don’t think it’s up to us to be able to judge, just as it’s not for you to judge, either, in one way or another, her position,” he said.

Peng’s disappearance from public view late last year prompted a global chorus of concern for her safety. In November, the I.O.C. scheduled a video call between Bach and Peng that confirmed she was in China and apparently unharmed. The organization did not release a transcript of that call and has not released transcripts or recordings of any of its subsequent interactions with Peng.

On Saturday, according to the I.O.C., Peng told Bach that she was disappointed that she didn’t qualify for the Summer Olympics in Tokyo last summer, but planned to travel to Europe “once the pandemic was over.” It added that Coventry and Peng would remain in contact and that “all three agreed that any further communication about the content of the meeting would be left to her discretion.”

Bach had said last week that the I.O.C. would only call for an official inquiry into Peng’s initial sexual assault accusations if she had asked them to do so.

In response to a question about whether the I.O.C. had discussed a potential investigation with anyone, Adams referred journalists on Monday to an interview Peng conducted with L’Equipe, a French sports daily, that was published Monday. In it, Peng once again claimed that the situation, and her accusation, had been a misunderstanding.

The hourlong interview with Peng, according to L’Equipe, was arranged on Sunday by China’s Olympic committee. The newspaper said that it was required to submit questions for Peng in advance, and her comments in Chinese were translated by a Chinese Olympic committee official.

“Sexual assault? I never said that anyone made me submit to a sexual assault,” Peng said, according to L’Equipe. “This post resulted in an enormous misunderstanding from the outside world,” she added. “My wish is that the meaning of this post no longer be skewed.”

Peng was asked why her original post containing the sexual assault accusation had been erased from her account.

She also told the newspaper that she was retiring from tennis.

Bach was not made available to comment on Monday. The I.O.C. said he was outside the city, watching downhill skiing, biathlon and ski jumping competitions.