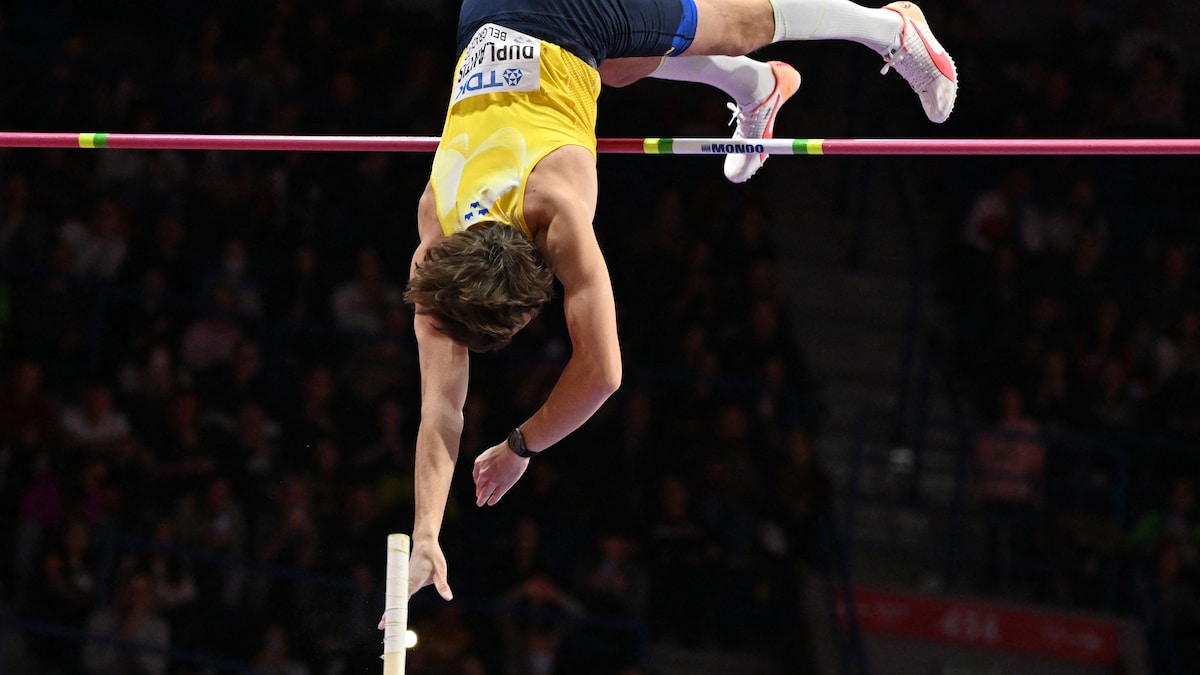 Sweden’s Mondo Duplantis bettered his own pole vault world record as he soared to gold at the World Indoor Championships on Sunday, but Norwegian Jakob Ingebrigtsen’s bid to further underline his 1500m dominance came a cropper. US-born Duplantis cleared 6.20 metres at the third time of asking, 1cm better than his previous best set in the same Stark Arena in Belgrade just two weeks ago. As soon as main rivals Chris Nilsen and Thiago Braz had fallen by the wayside, Duplantis had no hesitation about raising the bar to a record height.

The Swede was left punching the air as he went clear, his attention now focused on a world outdoor title in Eugene, Oregon, in July.

“The sky’s the limit. Another title, another world record – it’s been a pretty good day. Going over 6.20m for the first time, it’s hard to explain. It’s something that you can only dream of.”

Ingebrigtsen was outpaced to the line of a high-quality race by Ethiopian Samuel Tefera, one of two champions alongside long-jumping home favourite Ivana Vuleta who made all of their experience show through en route to the successful defence of their titles.

After Venezuela’s Yulimar Rojas’ incredible world record showing in the triple jump in the morning session, American Grant Holloway provided further fireworks when he equalled his own world indoor record of 7.29sec in the semi-finals of the 60m hurdles before adding that gold to his outdoor 110m world title.

All eyes on the track had earlier been set on Ingebrigtsen, who had set an indoor 1500m world record last month.

But Tefera had other ideas and batted off the mighty challenge of Norway’s Olympic gold medallist with a championship record of 3:32.77 for the win.

The 21-year-old Norwegian led for most of the race until Tefera made his move on the final bend, drawing equal with and then motoring past the Norwegian, who had no kick left in him to respond.

“I came here for the gold medal so of course I am disappointed,” Ingebrigtsen said. “I’ve been the best this season so I expected more.”

Fittingly it was Vuleta who stole the show in the long jump, delighting a large, raucous partisan crowd in the Serbian capital by claiming a back-to-back gold.

“My medal was like a cherry on the cake,” Vuleta said. “It was like an out-of-body experience. I didn’t have an easy task jumping in front of my home crowd. That built the tension for me.”

A day after the onlooking Yaroslava Mahuchikh won an emotional gold for the six-strong Ukraine team in the women’s high jump, her teammate Maryna Bekh-Romanchuk claimed silver behind Rojas in the triple jump.

But a quick turnaround saw the Ukrainian finish out of medal reckoning in the long jump, in sixth.

Holloway and Ajee Wilson ensured there were two American golds on the third and final night’s action in Belgrade.

Holloway made no mistake in the 60m hurdles, the Olympic silver medallist racing to victory in 7.39sec ahead of France’s Pascal Martinot-Lagarde, in 7.50.

“To come and run a world record, a world lead, to win a title and name myself world champion again, it’s a great feeling,” said Holloway.

And Wilson made good on her two previous silvers by producing a tactical masterclass to wrap up the women’s 800m, hitting the front at the bell and holding her form through the line for victory in 1min 59.09sec.

Belgium and Jamaica rounded off the evening session by winning the men and women’s 4x400m relays respectively.