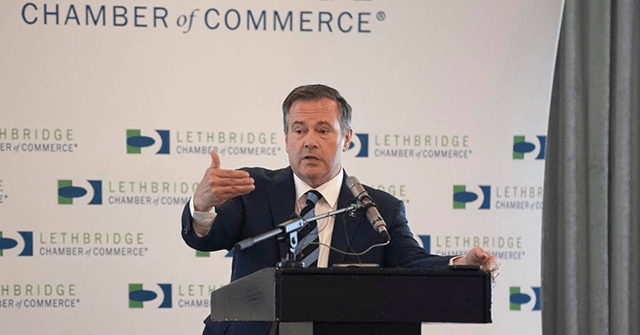 Royal Canadian Mounted Police (RCMP) have confirmed to Breitbart News that no officers have been assaulted by protesters at the Alberta border blockade despite the assertion from the province’s Premier, Jason Kenney, that they had.

The blockade – in which truckers protesting various Canadian coronavirus mandates by blocking the highway used as an international border crossing between Coutts, Alberta, and Sweet Grass, Montana – is part of what has become known as the “Freedom Convoy,” which also has conducted large demonstrations in Ottawa, the nation’s capital.

Supporters of the Freedom Convoy protest Covid-19 vaccine mandates and restrictions on January 29, 2022 in Ottawa, Canada. – Hundreds of truckers drove their giant rigs into the Canadian capital Ottawa on Saturday as part of a self-titled “Freedom Convoy” to protest vaccine mandates required to cross the US border. (Photo by Dave Chan / AFP) (Photo by DAVE CHAN/AFP via Getty Images)

At a press conference Tuesday, Kenney called for “calm” and said that he had heard reports of “people allied with the protesters assaulting RCMP officers, including one instance trying to ram members of the RCMP [with a vehicle].”

“This kind of conduct is totally unacceptable,” Kenney continued. “Assaulting law enforcement officers who were simply doing their job to maintain public safety and the rule of law is completely unacceptable.”

As first reported by Rebel News, the assault claim was untrue, and RCMP Cpl. Curtis Peters, who is on the ground in Coutts, independently confirmed to Breitbart News that no such assault took place, and the incident with the vehicle was an accident that occurred between civilians.

“There were no RCMP officers assaulted,” he said. “There was an assault that took place between two civilians. One of them was a protester who had been traveling the wrong way on a one-way lane of highway and then got in a collision with the innocent person. … But we haven’t had any assaults of police.”

According to Peters, the collision caused a fight to break out between the drivers.

While Kenney said that the protesters have “refused to negotiate in good faith with the RCMP,” Peters told Breitbart News that communications have been “constant” and “ongoing.”

Peters said the RCMP’s goal is to peaceably “bring this around to opening the roadway,” and added that in the past several hours, the truckers had agreed to open one lane of traffic for the northbound and southbound access. “But that wasn’t really opening up the border and bringing vehicles down, it just sort of allowed some more people to leave that had originally taken part in the protests and wanted out. That was done on their own accord,” he said. “We’ve been told that might be a temporary thing.”

In the negotiations, the truckers are maintaining that unless all the mandates are dropped, they are not leaving.

One such instance of conflict has to do with Coutts Mayor Jim Willett, who has reported harassment from some supporters of the protest.

According to Peters, Willett — who represents a town of 245 persons as of Canada’s last published census — said he has protesters outside his residence harassing him.

“The fight isn’t with the mayor,” Peters said. “He has no stake in the game when it comes to mandates. He’s trying to keep this community trucking along.”

The RCMP has also been tracking online threats to the mayor, but could not confirm to Breitbart News that those threats were coming from protesters.

Peters says he cannot predict when an end to the blockade, which entered its fifth day Wednesday, will come.