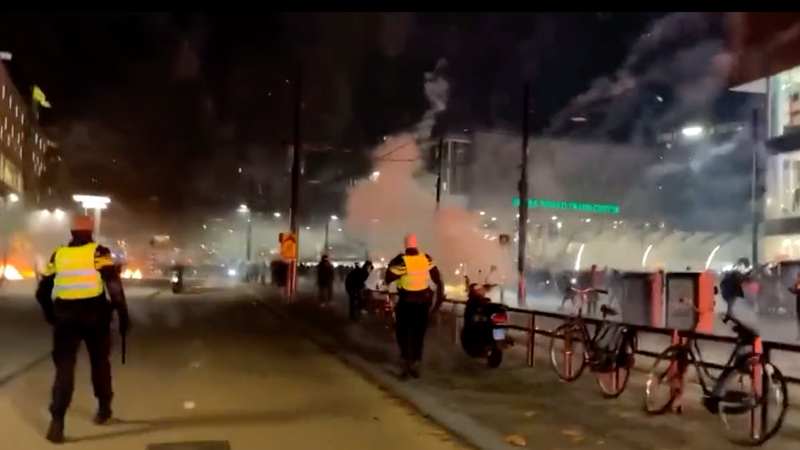 Protesters hit the streets of Rotterdam, Netherlands, on Friday after the government announced new Covid lockdown restrictions set to last another three weeks.

Footage out of the Dutch city shows fires scattered throughout several blocks as hundreds of people took to the streets, with police attempting to quell the violence.

“Police in Rotterdam have fired warning shots, injuring protesters, as riots broke out in central Rotterdam at a demonstration against government plans to restrict access for unvaccinated people to some venues,” reported the Guardian.

“Local media said gangs of soccer hooligans were involved in the rioting.”

Here was the scene leading up to the chaos:

Videos showed explosions going off, presumably from fireworks, and also featured police vehicles set on fire. Gunshots can be heard in other videos.

NOW – Chaos in #Rotterdam. Sounds of explosions and gunfire.pic.twitter.com/CvNidiLM2x

This was at the beginning the end😳 pic.twitter.com/DMvQbqhkdV

Kick for the police in Rotterdam pic.twitter.com/NedcPOUawG

Police in Rotterdam have confirmed that shots were fired and it is being reported that one protestor is dead but this is as yet unconfirmed. pic.twitter.com/U64bLKVdwM

One video circulating on social media showed several demonstrators tending to a fallen protester. A video caption purports there were “unconfirmed reports of protesters being SHOT DEAD by police.”

1/2
WARNING ⚠️ SOME FOOTAGE INCLUDING FOLLOWING POSTS MAY BE GRAPHIC

It’s kicking off in Rotterdam,

Unconfirmed reports of protesters being SHOT DEAD by police. pic.twitter.com/xenMgELJwb

A protester is seen to be shot in the street as tensions intensify in Rotterdam.pic.twitter.com/w0ybmfa8zW

In another video, a protester claims to show off a “Schotwond,” translated to english as a “gunshot wound.”

Here’s another person showing wounds purported to have been inflicted by police:

According to the Guardian, the new laws would “allow businesses to restrict the country’s coronavirus pass system to people who are fully vaccinated or have recovered from Covid-19, which would exclude people who test negative.”