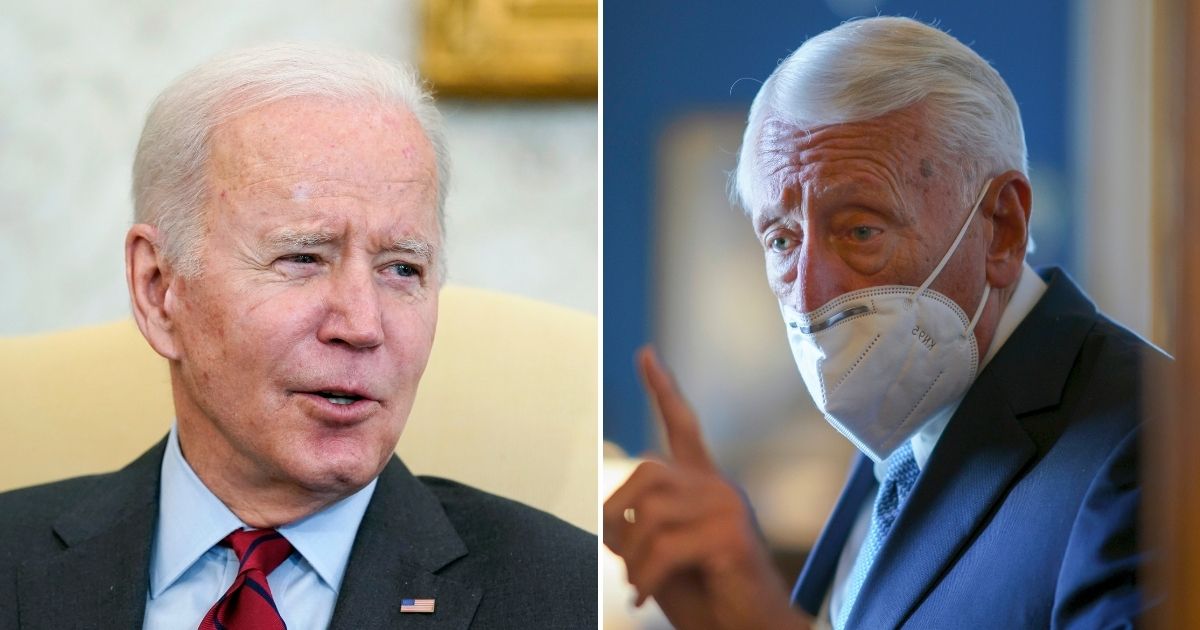 How much of a liability is President Joe Biden to Democrats running in the 2022 midterms? So much so that one of the top House Dems refused to answer whether or not candidates should run as “Biden Democrats” this November.

In an interview with Politico, House Majority Leader Rep. Steny Hoyer of Maryland wouldn’t say whether or not hopefuls should attach themselves to the president, whose poll numbers have been sinking.

In recent weeks, a number of key Democrats have snubbed Biden at major events or have made it clear they don’t want the president campaigning for them. (We’ve seen this coming for a long time here at The Western Journal — and we’ve been on top of what Biden’s agenda would mean for America from the start. You can help us bring America the truth by subscribing.)

In the interview, published Jan. 25, Hoyer “didn’t answer a question about whether frontliners should run as ‘Biden Democrats’ and campaign with the president,” Politico reported.

“In August, the [Democratic Congressional Campaign Committee] suggested they should, but Biden’s poll numbers have fallen drastically since then.”

“I want every Democrat to run as ‘Democrats who deliver,’” Hoyer said in response.

“Point to the record. Point to what was done.”

This might not be the wisest move; inflation, spending, dashed promises and no end in sight to the pandemic aren’t necessarily things to run on — either for the administration or for Congress.

However, it beats the DCCC’s suggestion back in August, which was to lean in to the president’s agenda and get it through Congress.

Will Republicans take back Congress in 2022?

Politico reported at the time that the group’s roadmap to winning, based on a July survey, was this: “Run as ‘Biden Democrats.’”

“The point is, to make sure that we’re all on the same page, that we understand the stakes,” said DCCC executive director Tim Persico said. “Here’s the good news: Everything we are doing and everything we’ve talked about doing is incredibly popular.”

“If [Democrats] use” the data and the strategy, he predicted, “we’re going to hold the House. That’s what this data tells us, but we gotta get in action.”

That was dumb then, but even dumber now. In a segment last week on MSNBC, longtime Washington insider Jim Vandehei — Axios’ co-founder and CEO — said that “Democrats are spooked by the idea of appearing with Joe Biden — which, I think, speaks to his standing inside of the party, given that his poll numbers are in somewhere in the low 40s.”

Judge Jeanine’s 60-Second Takedown: Soft-on-Crime Psaki Is the One Living in an ‘Alternate Universe’

The month of January managed to ably prove this.

Early in the month, Biden visited Atlanta to give a speech in which he announced he was requesting the Senate invoke the “nuclear option” and do away with the filibuster on the Democrats’ voting overhaul legislation. Notably absent was gubernatorial candidate Stacey Abrams — who, according to the Atlanta Journal-Constitution, had a scheduling conflict.

Given that voting rights are Abrams’ raison d’être politically — so much so she refused to concede the 2018 Georgia gubernatorial race, partially over what she viewed as disenfranchisement — the fact she couldn’t clear her schedule had less to do with the nature of the event as opposed to who was speaking.

And as for Texas Democratic gubernatorial candidate and serial election-loser Beto O’Rourke, he wants Biden to know he’ll have a scheduling conflict on any day that ends with a Y: “I’m not interested in any national politician — anyone outside of Texas — coming into this state to help decide the outcome of this,” he told The Dallas Morning News.

“I think we all want to make sure that we’re working with, listening to and voting with one another here in Texas.”

The only reason he said that, one surmises, is because that necessarily precludes people from Delaware and/or Washington, D.C., from dropping by.

It’s gotten so bad that Steny Hoyer is not only signaling to fellow congressional Democrats that it’s OK to ditch Biden, but he’s sending a message to the current occupant of the White House: Please stop helping. Whether or not he listens is another question entirely — but either way, it’s a black eye of epic proportions.