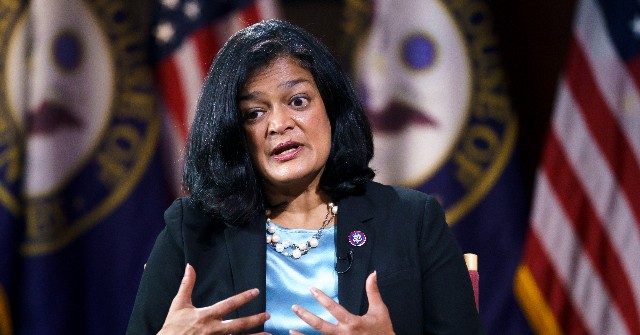 More than 15 lawmakers and aides confirmed to Politico that Jayapal is floating the idea of a 2022 House leadership position among her colleagues. Some members of the House Progressive Caucus, which she chairs, believe she may even challenge Rep. Katherine Clark (D-MA), the current assistant speaker of the House and close confidant of House Speaker Nancy Pelosi (D-CA).

Jayapal reportedly was having Rep. Veronica Escobar (D-TX) and David Scott (D-GA) make calls to other members of Congress on her behalf.

Unfortunately, at this time, the report said some Democrat representatives believe Jayapal’s focus is in the wrong place.

“The last thing you want, if you are a person that is thinking about running, is to rock the boat right now. Because we all need to be concentrated on 2022,” Rep. Ruben Gallego (D-AZ) said. Gallego refused to comment on Jayapal’s potential leadership campaign.

However, some Democrat lawmakers believe Jayapal’s focus should be on legislating. Since key components of President Joe Biden’s agenda stalled in Congress, 29 Democrat lawmakers already announced they would not be returning to Congress next year.

“It’s just not a type of conversation in my circles. It will be someday, but not now,” Rep. Gerry Connolly (D-VA) told Politico. “People are focused on — got to start talking up the economy, our accomplishments, and turning around the dynamic for the midterms. And we can worry about everything else later.”

“It’s too early to focus on that,” Rep. Josh Gottheimer (D-NJ) said when asked about Jayapal’s outreach.

When asked about it, fellow so-called “squad” member Rep. Cori Bush (D-MO) was hesitant to support Jayapal’s interest in House leadership. Bush’s focus is currently on the midterm elections. “I haven’t heard it officially yet. We’ll have to see. We have to win the midterms first,” Bush said, according to Politico.

Jayapal’s polarizing tactics during the Build Back Better negotiations could cost her some support if she seeks a House leadership position. As chair of the Congressional Progressive Caucus, Jayapal used her liberal voting bloc to stall progress on Biden’s Build Back Better agenda, which she felt was only a “down payment” on a much more progressive agenda.

“Whether she could actually find traction outside her base of the inner core of the Progressive Caucus” is an open question, an anonymous Democrat representative told Politico.

However, House Budget chair John Yarmuth (D-KY) praised Jayapal’s negotiation skills. “In the final analysis she was very effective. I believe she stood her ground. … She was ultimately willing to make the right concessions and, and bring her people along,” Yarmuth said.

Although chatter points to Jayapal’s interest in a House leadership position, those closest to her refused to comment on the situation publicly.

Rep. Escobar told Politico she refuses to “talk about any leadership races publicly” during an interview. Additionally, a Jayapal spokesperson said she “is focused on delivering for the people each and every day as an advocate for progressive policies in Congress.”

“As is common at this point in the cycle, she is considering how that could translate to a role in leadership, but has not made any decisions,” Jayapal’s spokesperson continued. “That decision will also be informed by the plans of her valued colleagues in the current leadership.”

“Leader Hoyer remains laser focused on getting our work done for the American people and maintaining our Democratic Majority,” Hoyer’s communications director said in a statement.

Rep. Steny Hoyer (D-MD) speaks during a news conference near the new Frederick Douglass Memorial Bridge on May 19, 2021 in Washington, DC. (Photo by Drew Angerer/Getty Images).

Additionally, Clyburn’s office said he “supports Nancy Pelosi if she seeks the Speakership again.” Pelosi’s deputy chief of staff, Drew Hammill, told Politico that “the speaker is not on a shift; she’s on a mission.”

Jordan Dixon-Hamilton contributed to this report.