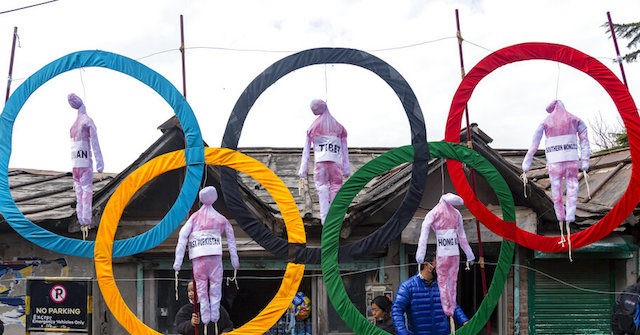 In an exclusive statement made to Breitbart News on Friday, Republican Rep. Mike Waltz, a Florida native who represents the Sunshine State’s 6th congressional district, began by calling out corporate America’s “hypocrisy”.

“There is clear hypocrisy among corporate America who preach social justice here at home but cower to authoritarians like the Chinese Communist Party to protect their bottom line,” he said.

Despite Congress, and the Armed Services Committee in particular, spending “hundreds of billions of dollars annually trying to protect America’s interests and deter the increasing aggressiveness of the CCP (Chinese Communist Party),” and with Chinese President Xi Jinping — who is “in the midst of a massive military buildup including their nuclear arsenal” — publicly stating his intention “to replace the U.S. as global super leader,” Waltz lamented the American financial support for that buildup.

“These U.S. corporations will continue to focus on their balance sheets even if it means turning a blind eye towards the CCP’s ongoing genocide, the repression of democratic rights in Taiwan and Hong Kong, and the early cover-up of the spread of COVID that has killed millions worldwide, and its escalation of military tensions,” he added.

Waltz, a colonel in the National Guard as well as a former White House and Pentagon policy adviser, concluded by declaring his commitment to do all in his power to protect future American servicepeople from the effects of current cooperation with China.

“Enough is enough and I will do whatever I can on the Armed Services Committee to prevent harm to future soldiers funded by our obsession with cheap products,” he said.

On Friday, Waltz called out corporate sponsors of “the Genocide Beijing Olympics” for allegedly using the Chamber of Commerce to “thwart” an amendment he proposed “that would have held them accountable for their hypocrisy in turning a blind eye to the CCP’s atrocities.”

Corporate sponsors of the Genocide Beijing Olympics used the Chamber of Commerce to thwart my amendment that would have held them accountable for their hypocrisy in turning a blind eye to the CCP’s atrocities. https://t.co/XrlEeprpDm

“When confronted with their lobbying efforts to help corporations further their profits in China that could be used against American soldier[s] one day, the Chamber [of Commerce] responded with complicit silence,” he added.

Though China has a record of being one of the most oppressive and genocidal nations in modern times with a long history of mass murder, oppression, corruption, and enslavement of minority groups, several multi-national corporations have rushed to China’s side to sponsor the 2022 Olympics in Beijing.

“Authorities have carried out mass arbitrary detention, torture, and mistreatment of some of them in various detention facilities, and increasingly imposed pervasive controls on daily life,” the group wrote.

“New regulations in Tibet now criminalize even traditional forms of social action, including community mediation by religious figures,” the report continued. “In Hong Kong, a region promised ‘a high degree of autonomy” under the Sino-British Joint Declaration, the Chinese and Hong Kong governments hastened their efforts in 2018 to undermine people’s rights to free speech and political participation.”

Last month, Waltz described being the first congressmember to introduce a resolution calling for a full boycott of the 2022 Beijing Winter Olympics “back in February before it became cool,” after initially pressing for altering the games’ venue.

“We’ve been pressuring the IOC (International Olympic Committee) and I want to be clear: the preference was for it to move the games,” he told Breitbart News.

“Senator Rick Scott (R-FL), myself, and others had been asking the IOC in letter after letter, engagement after engagement, to move the games when there was still plenty of time,” he added, “but once we were 12 months out it became clear that the IOC was not going to do that so we called for a full boycott.”

He also expressed dissatisfaction with other prominent figures for what he deemed hypocrisy on the issue.

“I would ask those conservatives, I would ask the athletes, I would ask the sponsors: did any of you who say, ‘well we shouldn’t introduce politics into athletics’ — number one: that ship has sailed — but number two: did they disagree with the IOC introducing politics when it came to apartheid?” he asked. “Did they think that was a bad move?”

“Because the IOC banned South Africa for the better part of three decades from any Olympic event happening in South Africa or even their team competing anywhere else,” he added.

Attributing the hypocrisy to money, Waltz highlighted his introducing of measures to limit Olympic sponsors.

“Why was it OK for apartheid but not now with China with an ongoing genocide?” he asked. “The answer, we all know, is how much money everybody is making.”

“So I’ve introduced measures to ban Department of Defense (DoD) aircraft from transporting anybody to the Olympics and banned the Olympic sponsors from selling their goods on military bases,” he added, noting his support for the Uyghur Forced Labor Prevention Act, “which finally, thanks to [Sen.] Marco Rubio’s great work finally passed.”