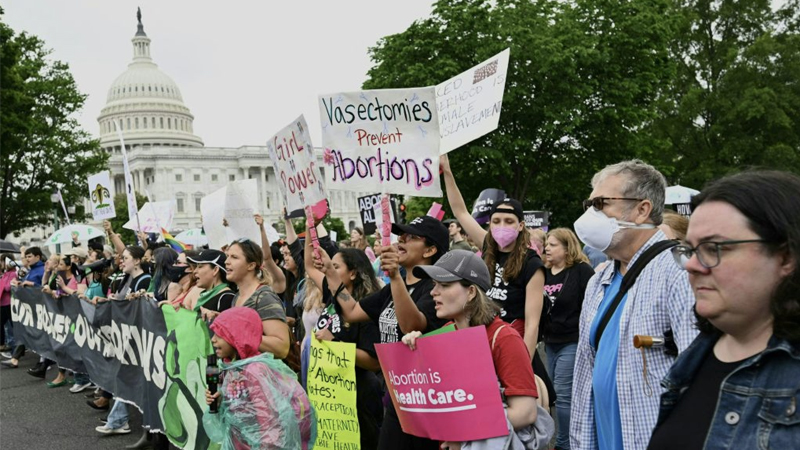 Thousands of pro-abortion activists took to the streets of Washington, D.C. and other cities on Saturday to oppose the leaked draft decision by the Supreme Court to overturn the 1973 Roe v Wade ruling legalizing abortion nationwide.

The “Bans Off Our Bodies” event was organized by Planned Parenthood and the Women’s March groups.

Women’s March executive director Rachel Carmona warned at the National Mall that there will be a “summer of rage” if abortion is overturned by the Supreme Court.

“We will be ungovernable until this government starts working for us, ungovernable,” Carmona said. “That’s why we are taking to the streets today in cities all across the country. It’s why today isn’t just one day of action. It is simply day one of an invigorated movement aligned behind one simple demand, and you all heard it, keep your bans off our bodies!”

Here at the Bans off our Bodies march in STL. #BansOffOurBodies #abortionishealthcare #abortionrights pic.twitter.com/pyym5ksIjX

A “Bans off our bodies” rally is happening at Willard park in Cleveland. Protests like this are happening across the state and the country. pic.twitter.com/WrT76Fqzos

Thousands of Michiganders are here showing up and showing out to protect abortion access in Michigan!

“Bans off our bodies!” pic.twitter.com/7ASrb80U9f

the bans off our bodies rally + protest march has gathered on the downtown mall outside charlottesville city hall. there’s a couple hundred people here now with speakers starting soon pic.twitter.com/3FfUZVCL7N

Despite the widespread media coverage and numerous protests, a recent Rasmussen poll showed that a slim majority of Americans would support the Supreme Court overturning Roe v Wade, with 48% approving of overturning the decision, and 45% disapproving the overturning of the 1973 landmark ruling.