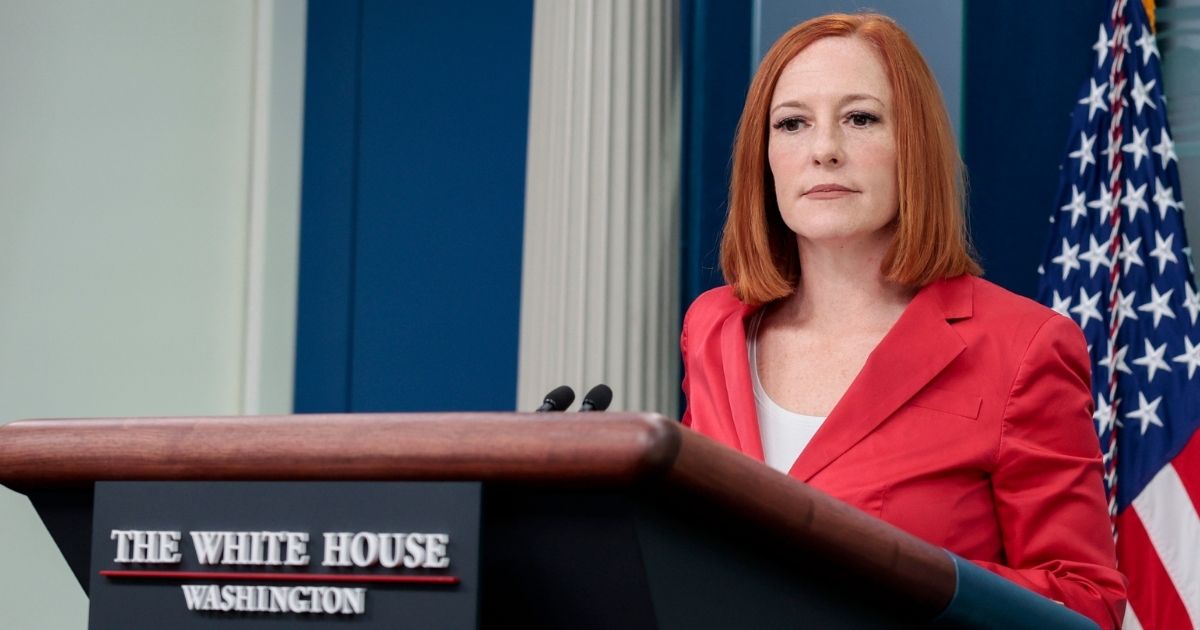 Noticing two migrants flailing about in the waters of the Rio Grande last Friday, Texas National Guardsman Specialist Bishop Evans immediately jumped in to rescue them. The migrants survived. Unfortunately, Evans was swept away by the strong currents and drowned. Following a three-day search, dive teams recovered his body on Monday.

On Saturday, the Texas Military Department said in a statement that the two migrants Evans tried to help “were involved in illicit transnational narcotics trafficking. They remain in the custody of U.S. Customs and Border Patrol.”

During her Monday afternoon White House briefing, press secretary Jen Psaki was questioned by a reporter about Evans’ death.

The reporter said, “Thank you, Jen. I don’t believe the White House so far has commented on the death of Bishop Evans, the 22-year-old National Guard Specialist who drowned trying to save two migrants. I wanted to give you the opportunity to say some words on that.”

“Yes. Thank you for that, Jacqui,” Psaki replied. “And the news of the confirmation that his body had been found was confirmed just a couple of hours ago. I would note that, of course, our heart goes out to his family and to his loved ones. … We know that National Guard personnel, including — including him, risk their lives every day to serve and protect others. And again, our hearts go out to his family.

Kamala Harris Drinks Israeli Wine, Instantly Gets Savaged by Her Own Unhinged Followers

“I don’t have any — in case you may ask, I don’t have any updates at this moment in terms of the President’s outreach, but if — if that is something I can update you on this afternoon, I will let you know.”

He should have not been there doing Joe Biden’s job trying to secure America.

The reporter pressed. “Does the White House feel any responsibility for his death, given that there’s reporting that he lost his life allegedly trying to save two migrants who were smuggling drugs? This is a problem that, you know, the administration has been facing for some time and is obviously, as we’ve been discussing, getting some criticism on. Is — does the White House feel at all responsible? And what — what more can you offer to people who, you know, are on the border, in border communities, who are experiencing loss and trials like this?”

Psaki responded, “Well, of course, we are mourning the loss of his life and we are grateful for the work of every National Guardsman. I would note that the National Guard worked for the states, and so he is an employee of the Tex- — Texas National Guard, and his efforts and his operation were directed by there, not by the federal government, in this — in this effort, in this apparatus.

“We’ve — we’ve long stated that our immigration system is broken.  There needs to be more done to invest in smarter security, to have a more effective asylum processing system.  And we would welcome any efforts to — for any elected officials to work with us on that.”

The reporter mentioned that the Texas governor has requested federal assistance on multiple occasions and that the influx of migrants will only increase after Title 42 is lifted next month.

And then Psaki went there. She blamed former President Donald Trump.

“Well, I would just say — if we just dial it back a few years to, kind of, what we inherited here — the former President invested billions of dollars in a border wall that was never going to work or be effective, instead of working towards comprehensive immigration reform,” Psaki noted.

“As part of the President’s proposal he put forward on his first day in office, he proposed investing in smarter security at the border — something he’d be happy to work with governors on. And — and certainly we’re open to having that conversation whenever they’re ready to do that.”

BREAKING: Multiple sources confirm the body of missing TX National Guard soldier SPC. Bishop Evans was found this morning. He is presumed to have drowned after jumping into the Rio Grande to save two people crossing illegally in Eagle Pass on Friday.
Pic from source. @FoxNews pic.twitter.com/6Ahij5a8BD

It’s breathtaking that Psaki had the temerity to make that statement. Even the most progressive reporters in that briefing room know that Trump had put policies into place that were working.

In the early months of Biden’s presidency, Americans watched in horror as throngs of illegal immigrants began streaming over our newly open southern border. And now, over one year later, the damage done to our once great country is starting to reveal itself.

The porous border has allowed criminals into the U.S., which has contributed to skyrocketing levels of crime in cities throughout the country.

Providing food, shelter and medical care for these people has strained our financial resources.

The drugs that are pouring across the border are killing young Americans at a frightening pace. In an early January news release, U.S. Customs and Border Patrol reported that in the fiscal year ended Sept. 30, seizures of fentanyl had increased by a whopping 1,066 percent and seizures of cocaine by 98 percent over the previous year.

How much fentanyl and other drugs came into the country undetected? One heck of a lot. Fox News reported in December that fentanyl overdoses had become the leading cause of death among U.S. adults ages 18-45.

The most fundamental duties of a government are to protect its citizens from harm and to provide law and order. The Biden administration ignores both.

Until they are changed or repealed by Congress, U.S. immigration laws remain in force — and this administration flagrantly violates them every day.

The border crisis is clearly the fault of the political left, which seems to do nothing but halt real action on security and immigration reform. Now Texas is scrambling to secure its own border, and it is costing American lives.

The truth is that Bishop Evans would be alive today if it hadn’t been for the Biden administration’s reckless disregard for the rule of law.