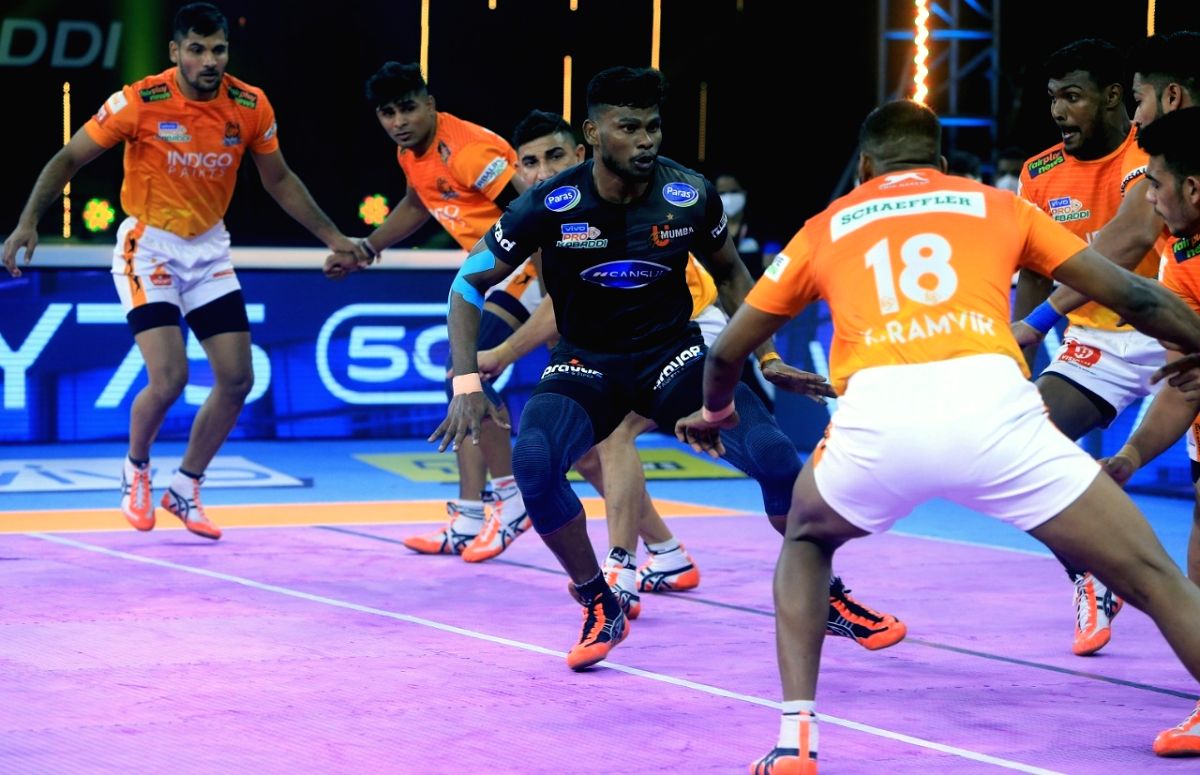 The men in orange made it two wins in two Maharashtra Derbies as they overcame a stiff challenge from Mumbai. Raiders Mohit Goyat (9 points) and Aslam Inamdar (8 points) once again impressed with their attack while young Abinesh Nadarajan marshalled the defence for Pune with a High 5 (6 points).

The win will give coach Anup Kumar’s Pune side much-needed confidence in their attempt to clinch a playoff spot. Mumbai’s Ajith Kumar scored a Super 10 but didn’t get the ample support required to seal a victory.

The first half was an intense affair with both the teams from Maharashtra attacking right from the first whistle. Pune’s Aslam Inamdar opened the proceedings with a 2-point raid, but Mumbai slowly grew into the match. Their raider Abhishek Singh’s hand touches were a sight to behold as Mumbai closed in on an early ALL OUT. But Pune’s left corner Karamvir dished out a Super Tackle to temporarily halt the U Mumba charge.

The team from Mumbai finally got their ALL OUT in the 12th minute to open a 4-point lead. Coach Anup Kumar’s Pune didn’t get disheartened by Mumbai’s early dominance and slowly staged a comeback. Aslam Inamdar’s 3-point Super Tackle with 2 minutes to halftime made it a 1-point game. Mohit Goyat also contributed as the momentum slowly shifted towards Pune in the dying minutes of the half. At the interval, the scores were 19-18 but Mumbai knew the Paltan team had upped their gears.

Pune could not finish Mumbai off as Ajith Kumar produced a series of successful raids in the early minutes of the second half to save his team. But Pune kept attacking with their raiders and Mohit Goyat’s tireless efforts paid dividends in the 10 th minute when he helped them clinch an ALL OUT. Pune took the lead and continued to pile on the pressure.

U Mumba perhaps missed a trick by not slowing down the pace of the match which suited the likes of Aslam Inamdar and Mohit Goyat. Maharashtra boy Ajinkya Kapre initiated a Super Tackle and then clinched a raid point to bring U Mumba closer to Pune. Ajith Kumar then got his Super 10 as U Mumba levelled the scores with 3 minutes on the clock. But Abinesh Nadarajan executed a stunning Super Tackle on Ajith Kumar to switch the balance once again towards Pune.

He secured his High 5 as his team kept calm in the final moments to win their second Maharashtra Derby of the Season.