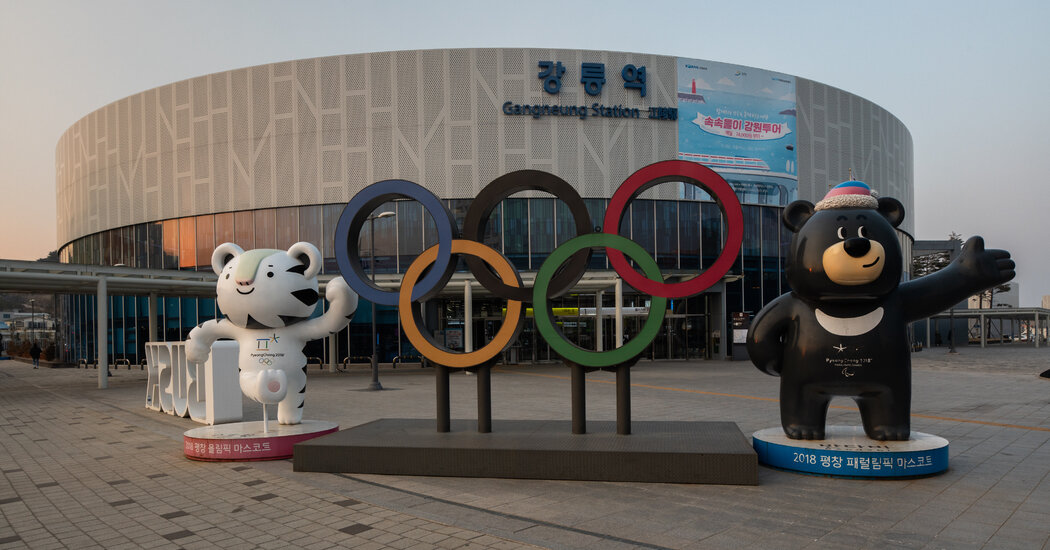 PYEONGCHANG, South Korea — The Winter Olympics in Pyeongchang ended four years ago, but when he drives his taxi, Jeon Jae-gu still sometimes wears a ski suit bearing the region’s Olympics logo, along with a matching Pyeongchang Olympics hat.

His trunk is stuffed with leftover trinkets that he often gives to passengers — lanyards, gloves, tote bags and figurines, all commemorating those 16 days when this rural county, one of the poorest in South Korea, was the center of the global sports world.

“I believe the Olympics gave us a chance for a new image,” Mr. Jeon said. “I heard that its harmonious effects will take 10 years to form. Slowly, slowly, slowly, time will have to pass.”

But not all the area’s residents share his optimism, or his patience.

Across the hills of Pyeongchang, reminders of the 2018 Winter Games are everywhere: in banners boasting a “Peace Olympics” with North Korea; in scattered statues of the Olympic mascots, in English menus on the doors of empty restaurants that once expected a flood of foreign guests.

One of the biggest vestiges of the Games has already begun to look like a modern ruin. The site of the 35,000-seat Olympic Stadium has become a mound of grass vaguely in the shape of an amphitheater, with a towering stadium torch remaining like a set of bones. A museum nearby preserves what’s left, its display cases filled with commemorative pins, coins and clothes.

Many see in these Olympic remnants the signs of bygone glory — and of unfulfilled promises.

The 2018 Winter Olympics were sold to Pyeongchang’s residents as a chance to cultivate global tourism that would transform the struggling region.

South Korea spent at least $13 billion on the Games, with some experts projecting returns on this investment of $58 billion within 10 years. Local news outlets speculated that the Olympics could help Gangwon Province “emerge as one of the world’s major winter tourist attractions.”

Yet on a recent visit to Pyeongchang, the distance from that vision and the present reality seemed immense, with Covid-related travel restrictions worsening what had already been a lackluster start to the county’s post-Olympics life.

The town surrounding Jinbu Station, built to shuttle spectators from Seoul to the Games, was eerily quiet as South Korea faced its second year of the pandemic, and as the Beijing Olympics dominated headlines.

“Nothing here has really changed — only some new roads and buildings,” said Shim Dal-seop, who helps run a family rice wine business. “In this town, there was no benefit to hosting the Winter Olympics.”

So far, the outcome of the Pyeongchang Games “is not favorable,” according to Andrew Zimbalist, a sports economist at Smith College who has studied the long-term financial and environmental impacts of hosting the Olympics. He doesn’t expect it to get any better, either.

“There’s always these promises — and it’s particularly responded to by small-business people — that you will have all these people coming through, that you will have a booming business, and that it will sustain itself because of the exposure you get,” he said. But “if you look at tourism numbers, you just don’t see an upward blip in the years surrounding the Olympics” for most host countries.

Pyeongchang had a modest amount of tourism before the Games, and attractions that predated the Olympics were still drawing visitors this month, even as South Korea wrestled with a surge of Covid cases as a result of the Omicron variant.

A 22-minute drive from Jinbu, dozens of couples celebrated Valentine’s Day by walking the rolling hills of Daegwallyeong Sheep Farm, long one of Pyeongchang’s most popular tourist attractions, even in winter. Children cooed at sleeping lambs huddled together for warmth. In the distance, visitors could see the Olympic ski slopes laden with artificial snow.

“People come here for the exotic scenery,” said Jeon Hyo-won, whose family opened the farm in 1988. “Now that most of the country is urbanized, it’s not easy to feel this atmosphere of nature.”

Despite the cold weather, the farm’s parking lot filled up quickly. Families stopped by kiosks to buy stuffed animals and steaming potato rice cakes before hiking up the hill to see the sheep, or as Mr. Jeon calls them, his “300 children.”

The farm of Mr. Jeon (no relation to the taxi driver) may be surviving, but his thoughts on the 2018 Olympics are bittersweet.

As a child in Pyeongchang in the late 1980s and early 1990s, he remembers a home without electricity and his mother washing dishes in a stream. Now, he sees the merits of all the infrastructure built for the Games, including the new bullet train line that brings people from Seoul to Gangwon in under two hours.

However, Mr. Jeon believes that many tourists take the train past Pyeongchang, on their way to the east coast, where summer activities like surfing and paragliding reign.

He said he did not notice an increase in tourists during or after the Winter Games, despite his efforts to welcome them with English and Chinese interpreters.

“The reality is very different from what was promised to us,” he said. “Back then, locals here expected the Olympics to affect us a lot.”

At the Alpensia Pyeongchang Resort, skiers and snowboarders glided down the mountains where athletes made their medal runs, enjoying the sprawling complex that was built ahead of South Korea’s Olympic bid.

“The amount of people looks pretty similar to before the Olympics, but at least the infrastructure has improved,” said Marie Boes, a freelance ski instructor from Belgium who has frequented Pyeongchang’s slopes for years.

In the year after the Olympics, Pyeongchang did experience a 22 percent spike in visitors, according to South Korean news organizations. But foreigners accounted for less than 0.1 percent of the 6.1 million people who visited paid tourist attractions in the region in 2019, a Pyeongchang county government report stated.

Even before the Games began, South Korean officials expressed concern about the costs of maintaining the enormous venues being built. Some even floated the idea of turning the Olympic skating rink into a seafood freezer after the Games.

The crown jewel of the event, the $100 million Olympics Stadium, was torn down to avoid high maintenance costs and decay.

“To me, it’s a monument of waste,” Mr. Zimbalist said.

In Gangneung, a small city that hosted the Winter Games’ ice sports competitions, an ice rink built for the Games was closed. And near the new bullet train station, a boutique hotel that once hosted Finnish athletes sat on a largely empty street of bars and motels.

“During the Olympics, I had high expectations. It felt like a very new world was unfolding,” said. “But the atmosphere changed a lot six months after the Games. The number of foreign tourists decreased.”

“It’s as though the feeling of excitement in this city has been buried,” Mr. Jeong added. “The Olympics are being forgotten.”

“It was the best event of my life,” he said. “Wherever I go, I’ll keep wearing these clothes. I’ll wear them for the next 10 years.”