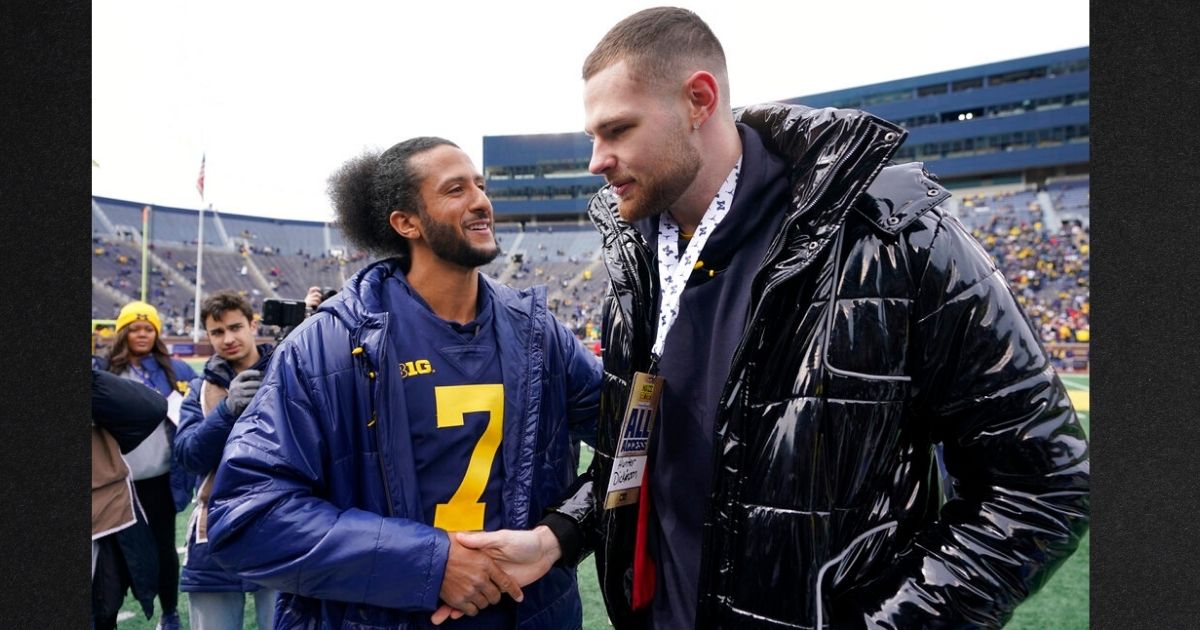 It has been more than five years since Colin Kaepernick played in his last NFL game, and he has spent that time making outlandish claims about the league. Yet he seemingly does not understand how his own actions have kept him on the outs.

According to Fox News, Kaepernick did an interview with the “I AM ATHLETE” podcast, which is hosted by former NFL players Brandon Marshall, Chad Johnson and Pacman Jones.

The interview aired Monday, and Kaepernick once again made his plea for an NFL team to sign him.

“I know I have to find my way back in,” Kaepernick said. “So yeah. If I have to come in as a backup, that’s fine.”

“But that’s not where I’m staying. And when I prove that I’m a starter, I want to be able to step on the field as such. I just need that opportunity to walk through the door.”

In a column for Yahoo! Sports, notorious leftist Shalise Manza Young attempted to argue Kaepernick’s willingness to be a backup “dismantles” one of the arguments for keeping him out of the league.

“First and foremost, he said without hesitation that he’s willing to sign with a team as a backup quarterback, debunking one of the most-repeated untruths about what he would or wouldn’t do to get another chance,” Young wrote.

Kaepernick would be a public relations disaster for any team due to his extremely radical views, and that would be a huge factor in the decision to sign him.

If Kaepernick was a once-in-a-generation talent, a team might be willing to take the PR hit in exchange for his talent on the field. But for a backup quarterback, it would hardly be worth it.

There are plenty of available quarterbacks who have just as much skill as Kaepernick and none of the PR baggage. Teams would be much better off signing any of those players instead.

Kaepernick also attempted to address his history of radical and nonsensical statements, but he refused to apologize for them. Instead, he blamed the NFL for not standing behind his extremism.

“You have ‘End Racism’ in the back of your end zone,” Kaepernick said according to Fox News. “You have ‘Black Lives Matter’ on your helmet. Everything I’ve said should be in alignment with what you’re saying publicly.”

This suggestion is absurd on its face, and a simple examination of Kaepernick’s last five years proves why.

The most glaring example of a statement that would not align with the NFL’s views came in Kaepernick’s Netflix series, “Colin in Black and White,” which premiered last year.

Kaepernick said the NFL establishes a “power dynamic” by evaluating players during the NFL Combine before drafting them. The series then displayed imagery comparing NFL owners to slave traders who were purchasing black men in chains.

Colin Kaepernick compare the NFL scouting combine to the slave trade in his new documentary pic.twitter.com/YcPJLM1cWv

Of course, Kaepernick failed to mention the owners are evaluating the players so they can decide whether or not to pay them millions of dollars to play football for their team. Furthermore, if the players do not want to be evaluated, they can leave at any time.

This process is clearly nothing like the slave trade, and the NFL has very good reason not to “align” itself with imagery suggesting it is akin to slavery.

In addition, Kaepernick has issued numerous calls to completely abolish the police in the United States.

“The central intent of policing is to surveil, terrorize, capture, and kill marginalized populations, specifically Black folks,” he wrote in an October 2020 opinion article for LEVEL.

In the same article, he said he believed police reform was no longer a viable option. Instead, he argued the only way to end racism was to completely abolish all police forces and prisons.

“By abolishing policing and prisons, not only can we eliminate white supremacist establishments, but we can create space for budgets to be reinvested directly into communities to address mental health needs, homelessness and houselessness, access to education, and job creation as well as community-based methods of accountability,” Kaepernick wrote.

The NFL is relatively woke, which is why it has no problem plastering “End Racism” all over the field. But that is not the same as suggesting all police forces are full of murderous white supremacists and need to be eliminated.

Every team understands the repercussions of promoting a man who spouts these dangerous lies. The potential damage this would cause is not worth the minimal benefit of adding a backup quarterback.

Kaepernick’s views are misaligned not only with the NFL’s views, but also the views of any reasonable person. The NFL doesn’t owe him anything, and it is a better league without his extremist rhetoric in it.