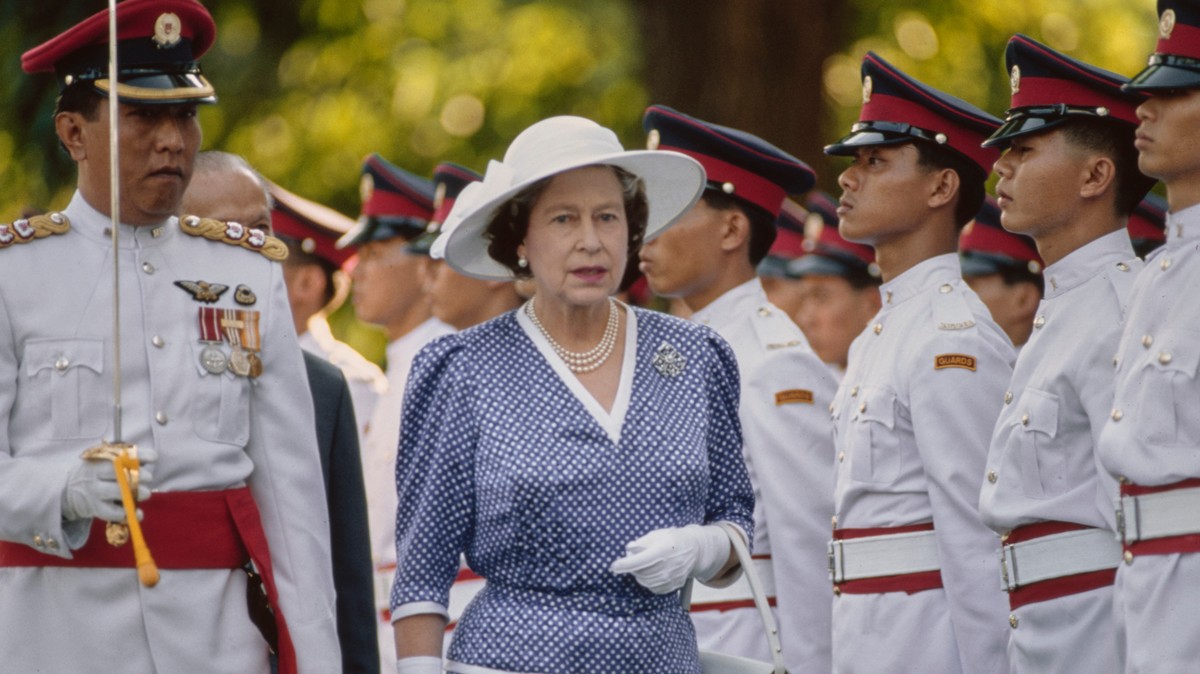 For much of Asia, the death of Queen Elizabeth II was announced in the late evening if not the wee hours. But the news was no less explosive, in a region where the British empire once wielded tremendous power and where the queen remained a largely welcome figure and the ceremonial leader of several Commonwealth countries.

“She has become personally bigger than the institution she represented because she has been there for so long,” Brian Farrell, a professor who teaches history of empires at the National University of Singapore, told VICE World News.

Here are some of the queen’s notable moments and controversies in Asia.

1. She was the first British monarch to visit China

In October 1986, Elizabeth visited China in what was seen as one of her most important diplomatic tours.

The visit took place less than two years after a tense meeting between China’s leader Zhao Ziyang and his UK counterpart Margaret Thatcher, during which they signed the Sino-British Joint Declaration. The pact underpinned Hong Kong’s 1997 handover to China after more than 150 years of colonial rule.

The visit was seen as a milestone in Anglo-Chinese relations. Reports at the time favorably described how she demonstrated diplomacy. During her trip, she walked in the pit of a newly excavated army of terracotta warriors in Xi’an and visited the Great Wall of China.

However, her husband, Prince Philip, famously gaffed when he told a group of students from Edinburgh University in Xi’an, “If you stay here much longer, you’ll all be slitty-eyed.”

A British tabloid called him “the Great Wally of China.”

2. Controversy over the Koh-i-Noor jewels

The British royal family’s crown jewels include some of the world’s most expensive gems and are worn by royals, including the late queen.

But some of these jewels hold a controversial and bloody past. Koh-i-Noor, a diamond that weighs 105.6 carats, was believed to be originally found in what is today’s Andhra Pradesh, in southern India, potentially as early as 1306.

When the British empire annexed the Kingdom of Punjab in 1849, the diamond was taken by colonists and became part of the crown jewels. Elizabeth the Queen Mother most recently had it, but Elizabeth II also wore it. The jewel’s controversial history has prompted outcry from India and Pakistan, as many demand its return.

India wanted the diamond as soon as it declared independence in 1947, and made a second request to have it back in 1953, when Elizabeth was crowned. Pakistan has also sought the diamond’s return.

Alastair McClure, an assistant professor of British imperial history at the University of Hong Kong, said the monarchy avoided discussions about controversial artifacts, which has allowed it to continue passing the jewels on.

“There hasn’t been a discussion, at least publicly, whether it’s appropriate to pass on these artifacts beyond Elizabeth, and that to me speaks as an example of disengaging with certain historical legacies,” he told VICE World News.

“It’s important to remember the history of imperialism and that it remains at the forefront of how we think about these institutions,” he said.

3. Her trip to Japan after WWII

The United Kingdom was a key part of the Allied forces that fought Imperial Japan during the second World War. Their relationship remained frosty even after the signing of the San Francisco Peace Treaty, which officially ended Japan’s position as an imperial power.

There were no direct exchanges between the two countries’ leaders until the 1970s, said Yusuke Suzumura, an associate professor of political history at Meijo University. But following Emperor Showa’s visit to the UK in 1971 and the queen’s subsequent trip to Japan in 1975, much of the bad air was cleared.

“The visit contributed greatly to improving awareness of the two nations’ friendly ties at the national level, as well as political and economic exchange,” Suzumura said.

Her visit is now seen as a great contribution to cementing ties between the two nations, as noted by the current Japanese Prime Minister Fumio Kishida.

4. The Queen’s last-ever trip to Asia

When Elizabeth visited Asia in 2006, her last stop was Singapore, a former British colony. There, she and Prince Philip visited a war cemetery, horse racing tracks, and the local community. She went to a public housing block in the town of Toa Payoh just as she did in 1972, when she made her first trip to the newly independent city-state.

Jerome Lim, a Singaporean resident who joined a crowd to see the queen, shook her hand.

“Following the visit, what I remember most was my reluctance to wash my hands—It was because a neighbor had told me that I should not wash my hands after shaking the queen’s hand as it would wash the luck away!”

During Elizabeth’s multiple visits to Singapore, she stressed an interest in maintaining economic and cultural ties, Donna Maree Brunero, a senior lecturer who researches British colonial legacies in Asia at the National University of Singapore, told VICE World News.

That was the case for many countries in Asia, where the queen commanded a lot of influence, Farrell of the National University of Singapore said.

Farrell said that unlike hard power—military force or money—the queen was one of three examples of the UK’s everlasting soft power in Asia. The other two were the English language and successful cultural phenomena, like English football.