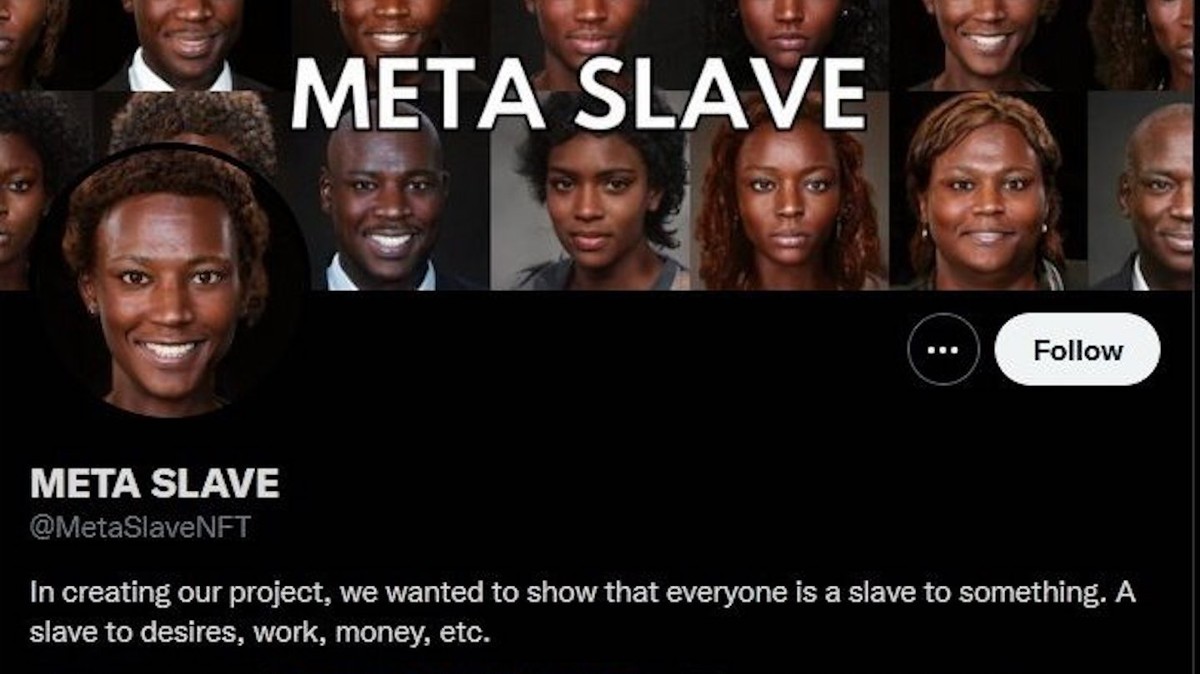 Over the past year, as the NFT space has begun to explode we’ve begun to see a growing number of racist collections—most notably NFTs depicting George Floyd called “Floydies.” This week we saw another project that surely won’t be the last racist NFT project, astoundingly called the “Meta Slave” NFT collection, which featured images of Black people. After predictable and justified backlash, the project has not shut down, it has merely rebranded to also feature “white, Asian, etc.” NFTs.

The collection, since removed on OpenSea, contained 1,865 NFTs―a reference to the year the Constitution was amended to abolish slavery. Every NFT was of a Black face, priced around 0.01 ETH, and simply named “META SLAVE” and an assigned number. The faces had the hallmarks of being algorithmically-generated, such as surrealy malformed accessories and teeth. All of this felt like a digital slave auction, reinforced by a tweet from the project (captured via the WayBack Machine) claiming that, “In creating our project, we wanted to show that everyone is a slave to something. A slave to desires, to work, to money, etc.” That tweet added that “There will be other collections in the future: white, Asian, etc.”

The project was criticized for being brazenly racist. The people running it have since oscillated between offering half-baked excuses and posting through the backlash to push its collection out into the world, before deleting its original account, rebranding to “Meta Humans” and including faces from other ethnic backgrounds.

According to OpenSea, the collection was created by someone going by “Unipic” who at one point, according to their bio, used the now-defunct Twitter handle @UniqueFractal.

The same day, it offered a different rationale: “With this project, we want to show everyone that we will never forget the victims and suffering of our ancestors, we must remember history so that it does not happen again,” reads another tweet captured by the Wayback Machine.

This is why, of course, it began to list the NFTs captioned with titles such as “Hard Work” with a smiling face and an emoji of a plant, “Smile through pain,” “Plunge” with a wave emoji attached, “Blood money,” and “Uncharted fate.”

Then, the account pivoted on January 31st and offered the “everyone is a slave to something” rationale.

Within a few hours, it backtracked again and tweeted: “We apologize to those who have been offended by our project but we are here only with good intentions. Peace to all.” Shortly after, the Twitter account announced they would be rebranding the collection to “META HUMAN’S[sic]” on Twitter and on OpenSea.

Thankfully, the project is not very successful. It’s sold 4 NFTs to 2 addresses thus far, amassing .04 ETH in volume, or $117 at today’s price. It has a Discord with five members currently, some of whom have taken to spamming an image of a pig with poop on its balls.

This, again, is not the first racist NFT project. In December, we saw the FloydiesNFT project attempt to sell collections featuring illustrations of George Floyd in what was obviously both a shameless cash grab and a transparent attempt to troll. The project was removed from OpenSea (although a page still exists there directing buyers elsewhere), and the Floydies are now available on its website where it claims this “is a revolutionary NFT project that aims to immortalize George Floyd on the Ethereum blockchain.” Nevermind that some of the pictures aiming to “immortalize” some of the images depicted Floyd as: an inmate, a burglar, Mao Zedong, wearing a shirt saying “AUTISM” with drooping eyes and drool running down the side of his mouth, and much more.

There’s not much point in trying to scry a deeper meaning here: NFTs, which are currently largely without much use except for theft and attempting to look cool by dropping a nice house’s worth of dough on a JPEG, sit in the middle of a disastrous ecosystem that incentivizes this very sort of behavior.