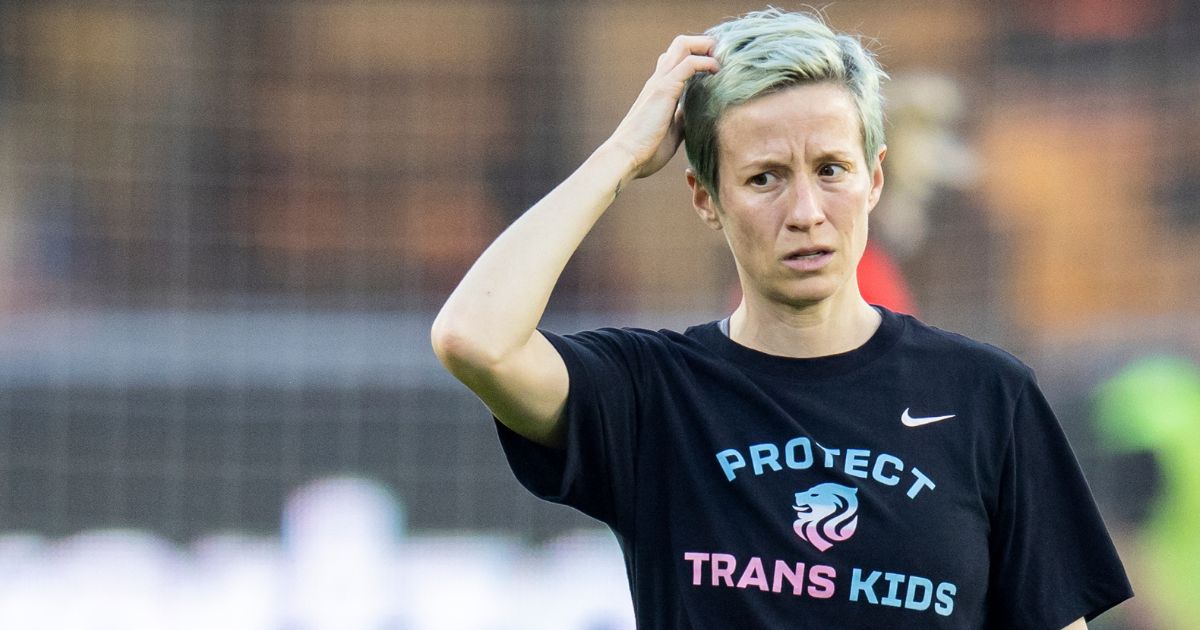 American soccer star Megan Rapinoe has a message for the parents of female athletes trounced by transgender males in women’s athletics: Your child’s ability to compete on a level playing field is less important than genuflecting to wokeness.

Oh, sure, she didn’t phrase it quite like that. Having heard her try to suss out progressive political points in her interviews, I doubt she knows what “genuflect” even means. (Note to Rapinoe: “to touch the knee to the floor or ground, especially in worship,” according to Merriam-Webster.)

However, it’s the message that came across when the woke face of women’s athletics told Time Magazine that parents need to “get a grip” and stop caring about whether their kid gets defeated by someone that isn’t even the same gender that they are.

(Here at The Western Journal, we’ve documented how transgender male athletes have an unfair biological advantage over female counterparts — and yet, when we point out the naked facts, Big Tech companies like Google try to choke off our ad revenue. We’ll keep bringing America the truth no matter what, however. If you support our mission, please consider subscribing.)

Ironically, the context of Rapinoe’s remarks was an interview about Title IX, the federal legislation which imposed equality mandates on federally funded educational institutions, including between men’s and women’s sports.

When asked what Title IX meant to her: “Oh, goodness. I mean, Title IX gave me the opportunity to play soccer in college and get a scholarship,” Rapinoe said.

“I don’t think I even knew about it until probably I got to college, or a little bit after. It wasn’t in my consciousness. That’s kind of the amazing thing about my generation is, we didn’t have to think about it. It was just there for us.”

Remember that answer. Later in the interview, Rapinoe was asked where she stood on transgender participation in women’s sports.

“I would also encourage everyone out there who is afraid someone’s going to have an unfair advantage over their kid to really take a step back and think what are we actually talking about here. We’re talking about people’s lives. I’m sorry, your kid’s high school volleyball team just isn’t that important. It’s not more important than any one kid’s life.”

Ah yes — it’s the old “would you rather have a living daughter or a dead son?” feint, based on the assumption that, if transgender men or boys aren’t allowed to do whatever they want, including play in women’s sports, they’ll literally die.

Never mind that there isn’t a clearly established link between accommodating every vagary of a teen who identifies as transgender and a reduction in suicide rates due to gender dysphoria: The claim passes as “inclusivity,” and thus cannot be subjected to serious scrutiny.

In areas where there is evidence, however, Rapinoe is just as daft: “Show me the evidence that trans women are taking everyone’s scholarships, are dominating in every sport, are winning every title,” she said.

“I’m sorry, it’s just not happening. So we need to start from inclusion, period. And as things arise, I have confidence that we can figure it out. But we can’t start at the opposite. That is cruel. And frankly, it’s just disgusting,” she continued.

God Help Us: We Asked Every US Senator if They Support Banning ‘Kid-Friendly’ Drag Shows – Only 1 Said Yes

“So, we need to really kind of take a step back and get a grip on what we’re really talking about here because people’s lives are at risk. Kids’ lives are at risk with the rates of suicide, the rates of depression and negative mental health and drug abuse. We’re putting everything through God forbid a trans person be successful in sports. Get a grip on reality and take a step back.”

Lia Thomas ought to be refutation enough for this. He was an average swimmer who suddenly began dominating events when he started competing as a woman. Granted , he swam for the University of Pennsylvania and Ivy League schools don’t give out sports scholarships — and he began attending before he started identifying as a woman. However, he’s hardly alone. Consider the case of two Connecticut transgender males who dominated high school girl’s track, Terry Miller and Andraya  Yearwood.

These girls are hurt by transgender competition.

Since 2017, two males who identify as female have taken 15 women’s state championship titles in Connecticut alone.

You can be pro trans rights without destroying women’s sports. It’s not that hard. https://t.co/c33WnIHGK4

Consider, too, the fact there are far more young people identifying as transgender every year as the inculcation of our children continues apace — meaning Thomas, Miller and Yearwood are merely the tip of the spear. Women and girls have lost championships over this, and scholarships are soon to follow.

And then consider that many medical experts and international sports governing bodies have begun acknowledging that evidence exists men have an advantage over women in sports, no matter what their identity is or what treatments they undergo.

“But things like hand size, lung size, feet size — that’s not going to change much. And of course, because as you know, swimming, it’s such an intense sport and people train so hard, that she is going to continue to have a significant exercise stimulus to those skeletal muscles.”

Even her argument about parents needing to “get a grip” contradicts itself: If your daughter’s volleyball game isn’t important enough to cordon off women’s sports as an inviolable area where women can compete on a level playing field, then it’s also not important enough that someone’s else’s son has a right to join in because they identify as that person’s daughter. It cannot simultaneously be a matter of life and death for the trans child but a mere trifle to the cisgender kid.

Of course, if these athletic triflings are so unimportant that we don’t need to delineate the gender of those competing, then we can just return the decision on who competes in what sports and what teams are fielded to the individual schools, right?

Well, no — because of Title IX.

Remember that? Rapinoe seemed to think it was pretty important earlier in the interview: “Oh, goodness. I mean, Title IX gave me the opportunity to play soccer in college and get a scholarship.”

Ironic, then, that women’s sports seems like a very big deal to Rapinoe and the federal government. The only time it’s not a big deal, apparently, is when you’re a parent and your daughter is competing against a male. Capisce?