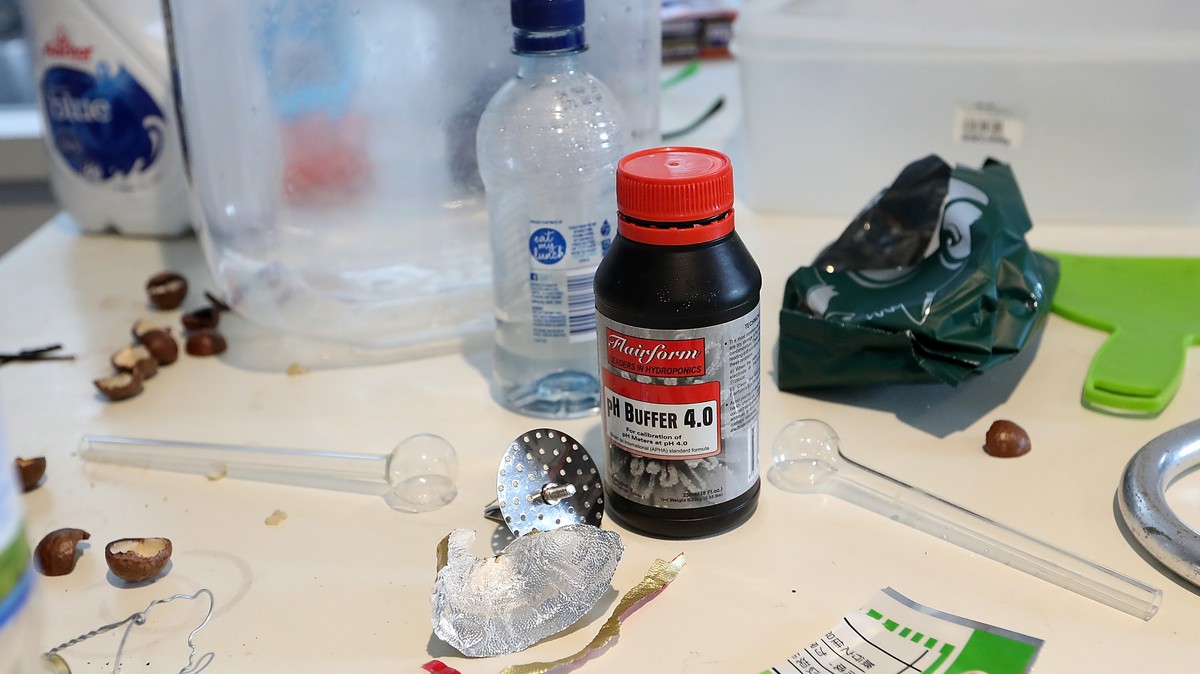 Pipes for smoking meth are among chemicals and equipment found in a methamphetamine manufacturing lab following a police raid on January 17, 2018 in Auckland, New Zealand. Photo: Fiona Goodall/Getty Images

New statistics published this week showed record quantities of methamphetamine in New Zealand’s wastewater, pointing towards potentially growing consumption of the drug in the country.

The findings, published on Tuesday, show average national weekly meth consumption stood at 17.3kg between October and December 2021—some 32% higher than the average for the previous four quarters. The quarterly average also represented the highest quantity of meth in New Zealand’s wastewater since nationwide testing began in November 2018.

The month prior, September 2021, also saw the highest levels of meth found in New Zealand’s wastewater during a single month since records began. In mid-August, the country was placed at Alert Level 4, the highest level lockdown, meaning that all but essential businesses were closed and only essential travel permitted.

There is growing research linking the COVID-19 pandemic to substance abuse. As economies falter and lockdowns occur, worsening mental health has resulted in increased substance abuse, according to some studies.

“I think [August’s lockdown] could be a really serious driver of even more methamphetamine use in New Zealand as people become adapted to that lifestyle and get used to using methamphetamine,” he said.

Another spike in meth in New Zealand’s wastewater was seen in March 2020. That month’s rise, representing the joint-second highest levels since records began, came as the country geared up for lockdown following the detection of its first case in late February, entering Alert Level 4 on March 25.

The wastewater analysis, which has been previously described as “one large urine test,” was conducted at sites covering up to 75% of New Zealand’s population. Also routinely tested are MDMA, cocaine, heroin and fentanyl, though meth is by far the most commonly detected drug in the country’s wastewater.

There are limitations to the data, however, with Ben Birks Ang, Deputy Director of New Zealand Drug Foundation, telling VICE World News that it provides a “broad-brush overview of regional methamphetamine consumption in New Zealand.”

“[The data] can’t tell us whether an increase in detection represents more people using methamphetamine, or the same number of people using increased quantities,” he said.

Statistics from the government’s 2019/20 Health Survey, published in March last year,  estimated that approximately 1.1 percent of New Zealand’s population, some 45,000 adults, had used amphetamine over the previous 12 months—of which meth is the most commonly used substance. Convictions for meth-related offences in New Zealand increased from 1,220 in 2011 to 3,404 in 2020.

Birks Ang called for a greater emphasis on harm reduction in New Zealand’s approach to drugs.

“The wastewater data shows that despite record-setting drug busts recently, methamphetamine use persists,” he said. “Police themselves say that we can’t arrest our way out of the issue. We need to put more focus on harm and demand reduction initiatives that are proven to work.”

Meth seizures have sharply increased across the Asia-Pacific region since the start of 2021. This has been linked to a deteriorating political situation in Myanmar, home to the world’s largest meth trade, which has resulted in supplies of the drug flowing out of the Golden Triangle and into the region.