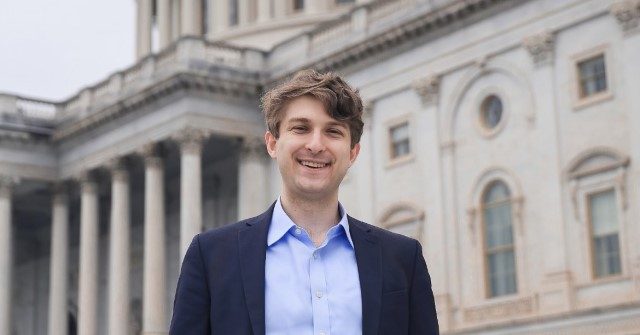 Foldi, who was previously an investigative journalist at the Washington Free Beacon uncovering corruption in the Biden administration, went on the attack during his radio appearance, calling Trone “the laziest Democrat in Congress” because he’s more focused on running his multi-billion dollar business from the halls of Congress than working for his constituents.

The Republican candidate explained how he is using his skills as an investigative journalist — where he previously uncovered Democrat lawmakers leaving their offices closed throughout the pandemic and still as the country is going back to work — on the campaign trail to expose Trone for not doing his job in Congress.

As Breitbart News reported, Foldi spent the last week going around to Trone’s different tax-payer-funded offices and holding press conferences to show how Trone — who does not live in the district — has become a “part-time congressman.” Foldi mentioned how he has been “inviting local business owners, farmers, teachers, veterans, law enforcement officers, Republican activists, to speak with me outside each and every one of his closed offices.”

A spokesman for Trone said that the “accusations” from Foldi about his offices being “routinely closed” is “misinformation which could create confusion for constituents.”And the spokesperson also admittingly noted that “each office is not open every day” but claimed that any calls to the office would be returned within 48 hours and that “constituent service [is] a top priority.”

Foldi again responded to Trone by saying he is “taking the Biden administration’s misinformation Bureau to the next level.”

“Trone lives 20 miles outside of the Capitol in Potomac, Maryland. Democrats in Maryland think that the state ends at Potomac and that Western Maryland just doesn’t exist and isn’t important,” Foldi stated. “But Trone lives 20 minutes from the Capitol and skipped 25 percent of the votes in the House last year alone.”

He further explained that “David Trone does not live in this district, he does not vote in this district, and he doesn’t even vote while he’s in the Capitol. He has zero excuse to not be doing his job. And yet he pretends to be our congressman. It is totally dishonest, and the fact that he responded to my closed office tour by calling it ‘misinformation’ instead of just opening his offices shows that his priority is the bottom line at Total Wine. It is not representing the citizens of Maryland’s Sixth Congressional District.”

Tune in to @BreitbartNews Saturday RIGHT NOW—I’m talking with @mboyle1 about @JacobMBliss’s story about my David Trone Closed Office Tour and how we’re finally going to get #MD06 a full time congressman https://t.co/USYVoH4CwD

“We know that Democrats will live in this permanent pandemic mode until kingdom come,” Foldi stated. “But, if you’re a member of Congress, you work on our time. You don’t work one day a week. You work five days. You work seven days a week. If there’s someone in your district who has a problem, you need to solve that, you cannot just sit there and let it gather dust.”

Hitting Trone on where his allegiance lies Foldi added that Trone is unresponsive “unless someone’s paying David Trone thousands of dollars to attend a fundraiser with Joe Biden or hundreds of dollars buying 30 racks at Total Wine … He’s responsive to Democratic mega-donors, and people who are paying him at his business that’s open seven days a week, while all of his government offices are closed.”

“If David Trone ran his multi-billion-dollar national business that has zero offices in our district the way he runs his government offices, we would have fired him two and a half years ago. That’s exactly what we’re gonna do in November,” Foldi expressed,” noting that on day one if elected to Congress, he is “going to start actually doing the job that Maryland’s sixth Congressional District residents need, which is being their representative.”

Foldi stated that when he is elected to Congress, the Republican party needs to start investigating the Biden administration and force some kind of accountability since “we also know that the Democrats still won’t even show up to work.” He also acknowledged that members of Congress not showing up for work and briefings in person causes a “massive national security threat.”

“When they’re either not discussing classified information, that’s how we see things like the failed Afghanistan withdrawal, or they are discussing classified information from their Starbucks, you know, in Brooklyn, and they’re just talking about classified material over Zoom. You know, who knows who’s listening to this,” he explained. “Democrats are the party of big government, we know this, but they’re also the party of closed and locked government. So we have a responsibility not to grow the size of government, but to actually open the government to do the job.”