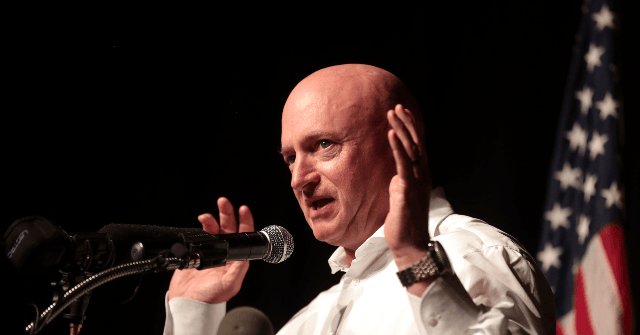 The National Republican Senatorial Committee (NRSC) released two ads in Arizona, in both English and Spanish, targeting vulnerable Democrat Sen. Mark Kelly, who is up for reelection this November.

Kelly has attempted to sound moderate to Arizona voters on border policies heading into the midterms to differentiate himself from President Joe Biden. Both NRSC ads, however, point out that the Arizona senator’s voting record on the border and illegal immigration is in lockstep with the Biden administration’s legislative agenda.

Kelly has voted on Biden-backed legislation 97 percent of the time since entering the Senate in 2021, which is mentioned in both ads.

The English ad highlights “how Kelly has voted to fuel the current crisis at the Southern Border: funding sanctuary cities, sending taxpayer-funded checks to illegal immigrants, and against a border wall,” the NRSC said in a press release on Thursday. The ad campaign is titled “Against Arizona” and is part of the NRSC’s “seven-figure ad buy” that will start airing statewide on Monday.

A group of individuals are returned to Mexico, on Title 42 grounds, after being encountered by U.S. Border Patrol agents near Sasabe, Arizona, on March 22, 2020. (CBP Photo/Jerry Glaser)

The ad also slams Kelly for voting against a government funding bill last August that would have established “a deficit-neutral reserve fund relating to ensuring that the Department of Homeland Security” be given the authority to deport anyone it deems necessary on Title 42 grounds.

The Spanish ad is slightly different as it targets Kelly on the inflation crisis, referencing Arizona’s rising gas and grocery prices, which an Axios-Ipsos poll found were a top concern for 34 percent of Hispanic voters.

The NRSC rolled out the $250,000 ten-day advertising campaign against Kelly on Friday. The ad will air on “network and cable Spanish-language television in the Phoenix, Tucson and Yuma areas,” according to Axios.

A Wall Street Journal survey in March showed that Republicans are leading Democrats by nine points among Hispanic voters, indicating that the Spanish-language ad buy could help bolster the GOP’s support within that community in Arizona.

Kelly will be well-funded heading into the November midterms. Breitbart News recently reported the “Democrat incumbent has raised over more than $61.5 million in the first three months of the year.”

Kelly will also likely have “well over $100 million in his war chest by November,” according to an official for the campaign of Blake Masters, a frontrunner in the U.S. Senate Arizona Republican primary field. However, Masters himself has proven to be a formidable fundraiser, bringing in $1,168,145 alone on individual contributions in the first three months of the year, far more than any of his Republican primary opponents.