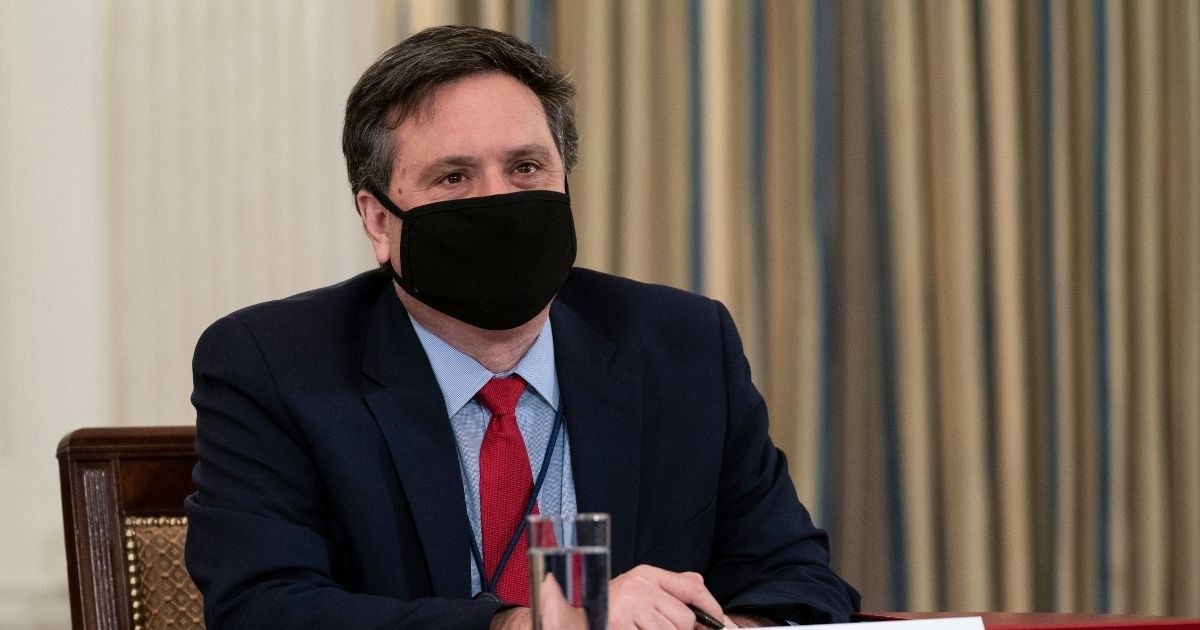 Remember all of those Democrats who would smirk and say someone in the White House needed to take Donald Trump’s phone away from him when he sent out a problematic tweet?

Some of them, I would imagine, work in the current White House. Perhaps some of them are even in close proximity to Ron Klain, the longtime minion of now-President Joe Biden — currently his White House chief of staff.

Of course, there’s no reason for anyone to take away Donald Trump’s phone now; Big Tech censorship has done that for everyone. (We’re fighting that here at The Western Journal — and you can help us by subscribing.)

Klain, however, is still at 1600 Pennsylvania Avenue. He’s still tweeting — and not to the Democrats’ advantage. If that whole taking-someone’s-phone-away thing wasn’t just a funny joke to tell on “Morning Joe,” now might be the the time for the intervention to take place.

Watch: Psaki Awkwardly Smirks as Reporter Savages Her by Listing Off Biden’s Failures for 1 Minute Straight

Given that inflation has been a thorn in the administration’s side, the report looked especially bad alongside a litany of disasters: poor unemployment numbers, the seeming death of the Democrats’ voting overhaul legislation, a demagogic speech by the president in support of nuking the filibuster to get that legislation passed in which he compared pro-filibuster senators to figures like George Wallace and Bull Connor, the Supreme Court striking down the meat of the administration’s vaccine mandate, a disastrous interview by Vice President Kamala Harris and more record COVID numbers.

The December numbers were higher than November’s numbers, which were an already-cataclysmic 6.8 percent.

That’s when Klain demonstrated yet again why he needs his phone yanked with one retweet:

“But headlines notwithstanding, unless I’m missing something the monthly rate has actually trended DOWN the last two months. So read the details.”

Never mind that this is wrong on so many levels. Well, actually, let’s mind for a second, considering this is the factually impoverished, brainlessly rah-rah partisan view of the inflation numbers the White House chief of staff thought was worth retweeting.

When talking about “recent standards,” for instance, 40 years is pretty recent only if we’re taking into account the entire life of the republic. Marshall was trying to make the point that, despite eye-popping year-over-year inflation numbers compared to 2020, month-over-month inflation numbers have slowed a bit over the past two months — but isn’t much of a victory at all, considering monthly numbers in October and November were ghastly high and the 0.5 percent increase in December was greater than the 0.4 percent the market had forecast, according to Trading Economics.

Yet, after more bad economic news, this is what the White House chief of staff decided was the reassurance America needed to hear. And why should we be surprised? Klain’s job on social media, from all appearances, seems to be very sloppily (and very obviously) applying lipstick to the Biden administration’s multitude of pigs.

In early December, as the Washington Examiner noted, the White House got another dismal employment report — only 210,000 new jobs, well off the half-million economists were expecting. Digital lipstick, meet Bureau of Labor Statistics pig:

America is back at work. https://t.co/msPBhjTEng

“America is back at work,” Klain proclaimed. This is definitionally true, even if only half the Americans Wall Street predicted would be back at work actually were. And yet again, he was touting a number nobody was watching — the labor force participation rate, which rose to the highest number since the bleakest days of the pandemic. In a single ill-starred tweet, Klain managed to provide some of the most naked, ineffective spin possible while awarding his Biden White House an economic data participation trophy at the same time.

This isn’t even the only time Klain has tweeted something grotesquely tin-eared about inflation, either.

In September, the year-over-year inflation number sat at 5.4 percent — which was considered horrifying then but looks practically anodyne now. In the wake of the data’s release, Harvard economics professor Jason Furman tweeted this gem: “Most of the economic problems we’re facing (inflation, supply chains, etc.) are high class problems. We wouldn’t have had them if the unemployment rate was still 10 percent. We would instead have had a much worse problem.”

Klain not only retweeted that Marie Antoinette piffle, he added the insipid millennialism “This,” coupled with two fingers pointing down at Furman’s tweet — just in case you didn’t know what he was referring to:

And if you need any more evidence Klain needs his phone taken from him, consider this: The chief of staff’s retweets were part of a judgement that temporarily halted the Biden administration’s vaccine mandate.

Are we in an inflation crisis?

In a November ruling from the 5th Circuit Court of Appeals in New Orleans, a judge wrote that Klain’s retweet of MSNBC host Stephanie Ruhle — who said “OSHA doing this vaxx mandate as an emergency workplace safety rule is the ultimate work-around for the Federal govt to require vaccinations” — was evidence that “[a]fter the President voiced his displeasure with the country’s vaccination rate in September, the Administration pored over the U.S. Code in search of authority, or a ‘work-around,’ for imposing a national vaccine mandate.”

So, White House Dems who cracked jokes about taking Trump’s phone away — it’s your move, folks.

Do you want to put your money where your mouth is and force the chief of staff to use a Nokia feature phone? Or, when the next round of cataclysmic economic numbers come out, do you want Klain retweeting some random consumer behavioral expert that writes for HuffPo claiming inflation is a good thing because when there’s a really big number next to an item they just bought on a receipt, they tend to value it more?

I’d opt for the latter category, but that’s purely out of self-interest. When you’re a writer trying to raise a family and you’re dealing with 7 percent inflation, you take your laughs where you can get them — even if those laughs are unintentional and delivered by the administration actively causing the economic pain.

If I were in the White House, however, I wouldn’t let Klain anywhere near anything newer than a Blackberry.

After all, when you’re trying to keep a torrent of bad news as low-key as possible, it’s profoundly unhelpful to have a top administration official who can’t help but tweet the quiet part out as loud as he can.