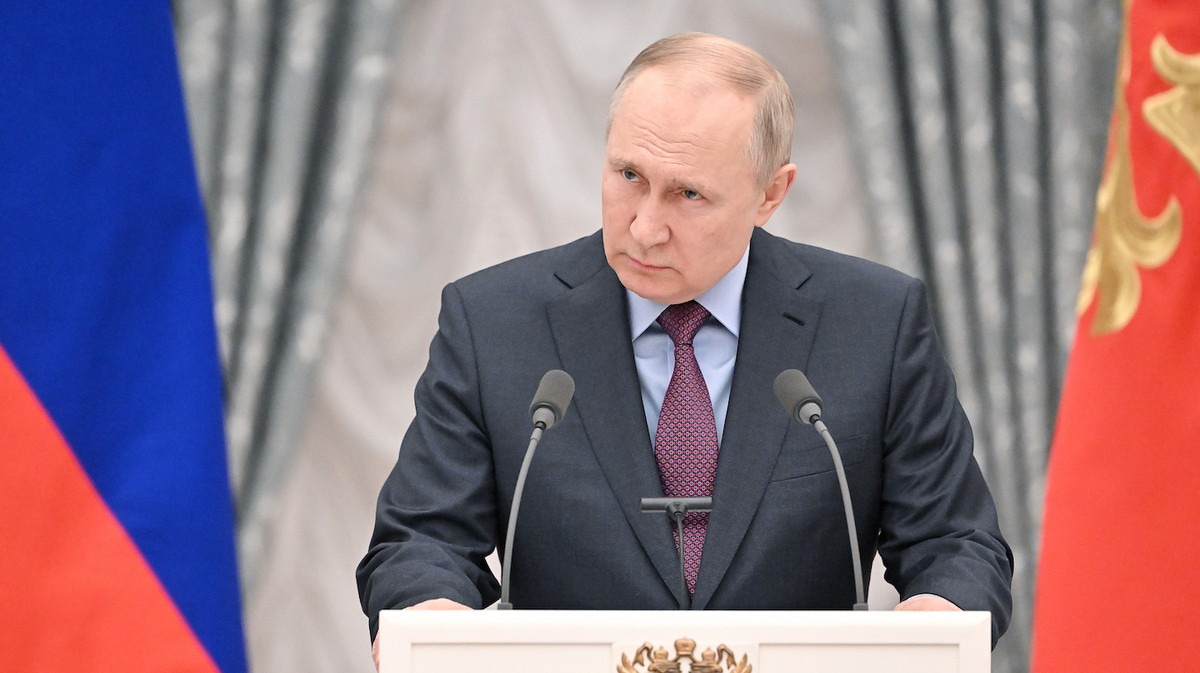 Russia’s President Vladimir Putin gives comments to the media after a ceremony to sign a declaration on allied cooperation between Russia and Azerbaijan at Moscow’s Kremlin. (Sergei Guneyev\TASS via Getty Images)

The Russian economy is in freefall as a result of the United States, the European Union, Canada, the United Kingdom, and numerous other nations imposing sanctions against Russian companies, oligarchs, and financial institutions, including the country’s central bank, in response to President Vladimir Putin’s invasion of and continued assault on Ukraine.

The worth of Russia’s ruble sank below $.01 U.S. at one point on Monday, losing more than 20% of its value after a series of devastating sanctions targeting some of its richest and most powerful, as well as the Russian economy more generally. Russians lined up outside ATMs this weekend to withdraw money, even after the Bank of Russia said in a Friday statement that the amount of money in ATMs was “more than sufficient” and that Russians’ bank funds were “fully preserved and available for any transactions.”

Bank of Russia governor Elvira Nabiullina said Monday that “households and companies” are “experiencing a deterioration of their financial position” as a result of the sanctions.

“The new sanctions imposed by foreign states have entailed a considerable increase in the ruble exchange rate and limited the opportunities for Russia to use its gold and foreign currency reserves,” Nabiullina said in a statement announcing that the Bank of Russia would more than double its key interest rate to 20%. “Accordingly, we need to employ a wide range of tools to maintain financial stability.”

The Bank of Russia canceled trading at the Moscow Stock Exchange Monday, and the stocks of Russian companies and exchange-traded funds around the world took a massive hit as well.  The European Central Bank said Monday that the European subsidiaries of Russia’s largest bank, Moscow-based PJSC Sberbank, are on the brink of failure as a result of sanctions, Financial Times reported.

The Biden administration’s latest set of sanctions effectively freezes the Bank of Russia’s ability to do business with Americans and American financial institutions, as part of a broader effort to freeze Russian assets in countries that oppose the invasion. The Bank of Russia held more than $640 billion in foreign currency reserves as of Feb. 18, according to the Washington Post.

“The unprecedented action we are taking today will significantly limit Russia’s ability to use assets to finance its destabilizing activities, and target the funds Putin and his inner circle depend on to enable his invasion of Ukraine,” Treasury Secretary Janet Yellen said in a statement.

A senior Biden administration official said in a conference call Sunday that the new sanctions were imposed because the administration found out over the weekend that the Russian central bank “was attempting to move assets and there would be a great deal of asset flight starting on Monday morning from institutions around the world,” according to CNBC.

Even Switzerland, a nation synonymous with neutrality, announced Monday it would join other European Union nations in freezing Russian assets within its borders.

The new sanctions follow an agreement this weekend between leaders of the European Commission, the U.S., the United Kingdom, France, Germany, and Italy to move to marginalize Russia within the international finance system and punish Russian oligarchs who are tied to Putin.

The Russian energy sector has also been slammed by the global response to the Ukraine invasion, as BP announced Sunday that it would sell off its nearly 20% stake in state-owned oil company Rosneft, while Shell announced Monday that it would exit its joint ventures with Russian state-owned energy company Gazprom—including the Nord Stream 2 pipeline project.

An official at the Institute of International Finance (IIF), the trade association for the global financial industry, predicted Monday that the Russian economy could contract as much as 10% due to the response to the Ukraine invasion.

“This takes us back to the 1990s when the [Russian] economy was in complete disconnect from the global economy,” IIF deputy chief economist Elina Ribakova told the Wall Street Journal.