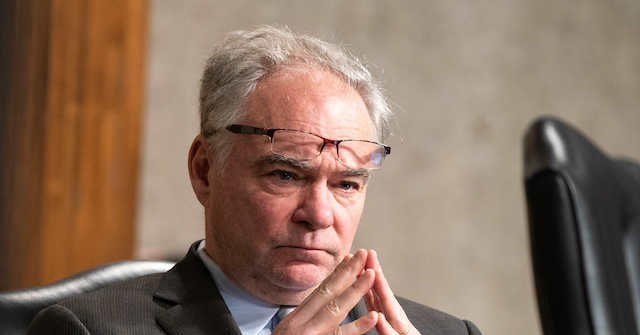 Senator Tim Kaine (D-VA) said Tuesday on MSNBC’s “All In” that the upcoming vote in Congress to sanction Russia for their invasion into Ukrainian territory will expose if Republican lawmakers are “appeasers” of Russian President Vladimir Putin.

Guest-host Alex Wagner said, “President Trump’s comments today calling Putin’s moves genius probably haven’t helped anything. You are really convinced that next week when you guys are back in session, Republicans are going to play ball with Democrats and effectively work to further the Biden foreign policy agenda, the national security agenda?”

Kaine said, “Yes, I think there will be some who will follow Donald Trump. Donald Trump calling Putin’s move a genius move, a savvy move, you, know he couldn’t get a Nobel prize, so maybe he’s trying now for the Order of Lenin, or even better, finally, a Trump Tower in Moscow. But we will put our Republican colleagues on the board and see whether they’re Vladimir Putin appeasers or they’re standing up for the Western democracies. I believe that enough Republicans will stand against Vladimir Putin’s aggression that we will be able to coalesce around those sanctions packages. Again, I think Democrats and Republicans agree over what the package should be. The question was which should trigger it. There is no disputing now that the Russian recognition of Donetsk and Luhansk and moving in military assets in Ukraine, the trigger has been passed in Western democracies led by the United States have to stand up against it.”