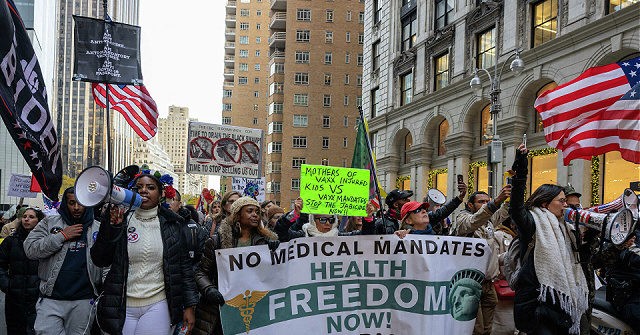 The U.S. Supreme Court on Monday declined to grant an emergency request from New York healthcare workers to block the state’s coronavirus vaccine mandate, which includes the option to apply for medical exemptions but intentionally excludes religious exemptions.

The Thomas More Society, a legal group that fights for religious liberty, filed a lawsuit on behalf of nearly 20 New York healthcare workers against Gov. Kathy Hochul (D-NY), New York State Department of Health Commissioner Howard Zucker, and New York Attorney General Leticia James before the Sept. 27 mandate deadline went into effect. The lawsuit alleges the state is violating Title VII of the 1964 Civil Rights Act by discriminating against healthcare workers on the basis of religion and is violating the Free Exercise Clause of the First Amendment of the U.S. Constitution.

Judge David Hurd in the United States District Court for the Northern District of New York issued a preliminary injunction in October, only for the liberal-leaning U.S. Court of Appeals for the Second Circuit to nullify the order and rule against requiring the state to allow religious exemptions. The Supreme Court voted 6-3 against issuing a stay of the Second Circuit’s decision while the court process plays out. Conservative-leaning Justice Neil Gorsuch, who was joined in opposition by Justice Samuel Alito and Justice Clarence Thomas, penned the dissenting Court opinion, saying, ‘Today, we do not just fail the applicants. We fail our­selves.”

Municipal workers hold placards and shout slogans outside city hall during a protest against the covid-19 vaccine mandate, in New York on October 25, 2021. (Photo by ED JONES/AFP via Getty Images)

Gorsuch wrote that the Court was repeating the same mistake it made in a similar case involving Maine healthcare workers by “turning away New York’s doctors and nurses.”

“We do all this even though the State’s executive decree clearly interferes with the free exercise of religion—and does so seemingly based on nothing more than fear and anger at those who harbor unpopular religious beliefs,” he wrote. “We allow the State to insist on the dismissal of thousands of medical workers—the very same individuals New York has depended on and praised for their service on the pandemic’s front lines over the last 21 months.”

He added that the Court added “insult to injury” by additionally allowing New York to deny healthcare workers unemployment benefits.

“One can only hope today’s ruling will not be the final chapter in this grim story. Cases like this one may serve as cautionary tales for those who follow. But how many more reminders do we need that “the Constitution is not to be obeyed or disobeyed as the circumstances of a particular crisis … may suggest?” he wrote.

Conservative-leaning Justices Amy Coney Barrett and Brett Kavanaugh sided with the liberal-leaning justices, though Barrett in a previous concurring opinion for the Maine case said her decision to block that request was because it was brought on the emergency docket or “shadow docket.” She argued that the Court should not use the emergency docket to handle such a case and to make a decision “on a short fuse without benefit of full briefing and oral argument.”

In his searing 14-page dissent, clearly written for the history books, Justice Gorsuch rightly expresses his frustration over the Court’s refusal to prevent the irreparable harm caused by a ‘vaccine mandate’ that targets religious objectors to COVID-19 vaccination in the health care workforce for professional destruction, denying them even unemployment benefits, because—as the intolerant Governor of New York puts it—they “are not doing what God wants.”

It is astonishing that the Court tolerates this blatant invasion of religious freedom by a bigoted Governor and her health bureaucrats on the pretext of a never-ending ‘emergency’ that morphs as rapidly as the virus itself. And this for the sake of mandatory vaccination with vaccines everyone now knows have failed to prevent transmission of the virus. The word irrational only begins to describe the institutional insanity the Court should have restrained.

One can only hope that, as the examples of this tyranny multiply and pile up on the Court’s doorstep, the majority will finally do what it did last year in striking down New York’s absurd church closures in the name of “public health”—the right thing. Meanwhile, one can only agree with Justice Gorusch’s assessment of the Court’s refusal to act in the face of New York’s naked oppression of a religious minority: ‘Today, we do not just fail the applicants. We fail our­selves.’”

The Making of a Mandate:

Before former New York Gov. Andrew Cuomo (D) stepped down following nearly a dozen sexual assault allegations, he proposed a vaccine mandate for healthcare workers which allowed for both religious and medical exemptions. Once he resigned, Lt. Gov. Hochul took over as governor and oversaw a rewriting of the mandate to exclude the option for religious exemptions. Around the same time, Hochul announced that New York was changing its unemployment insurance scheme, making healthcare workers who failed to comply with the mandate ineligible for unemployment insurance benefits.

While New York’s Public Health and Health Planning Council provided no reason for the change, Hochul herself publicly acknowledged that the change was “intentional” and said those who forego the vaccine “aren’t listening to God.” Then she, a government official, likened herself to Jesus Christ in an effort to persuade people to get vaccinated.

“I need you to be my apostles,” the governor added, saying that receiving the treatment is how New Yorkers can “love one another.”

Hochul, who claims to be a Catholic, “has repeatedly pointed to statements by religious leaders who support vaccination: the Archdiocese of New York, for example, has told priests that granting religious exemptions would contradict Pope Francis,” the Associated Press reported. Notably, Catholicism and Evangelical Christianity are not the same — and a common tenet for all Protestants is they do not believe in the infallibility of the Pope or his recommendations — but politicians often conflate the two to make the point.

Moreover, while a majority of the plaintiffs in the lawsuit are Catholic, they are arguing they “have longstanding constitutional protections based on their own religious belief — not statements by religious leaders,” the report states.

The Wall Street Journal in October reported that thousands of unvaccinated healthcare workers had been fired since the mandate took effect, “prompting hospitals to cancel elective surgeries and close operating rooms and outpatient clinics. Many nursing homes have stopped admitting new patients.”

Hochul at the time belatedly acknowledged healthcare worker shortages rocking the state, though instead of loosening the reins, she talked about calling on the National Guard and workers in other states to fill the void. New York Attorney General Letitia James has continued to hold that the vaccine mandate is not discriminatory against anyone’s religious beliefs, court documents show.

“The rule’s medical exemption is tightly constrained in both scope and duration, and it serves rather than undermines the rule’s objective of protecting the health of healthcare workers,” James argued.

Gorsuch wholly disagreed, saying the state has “not even tried” to present evidence proving James’ point.

“Maybe the most telling evidence that New York’s policy isn’t narrowly tailored lies in how unique it is. It seems that nearly every other State has found that it can satisfy its COVID–19 public health goals without coercing religious objectors to accept a vaccine,” he wrote. “New York has presented nothing to suggest that accommodating the religious objectors before us would make a meaningful difference to the protection of public health. The State has not even tried.”