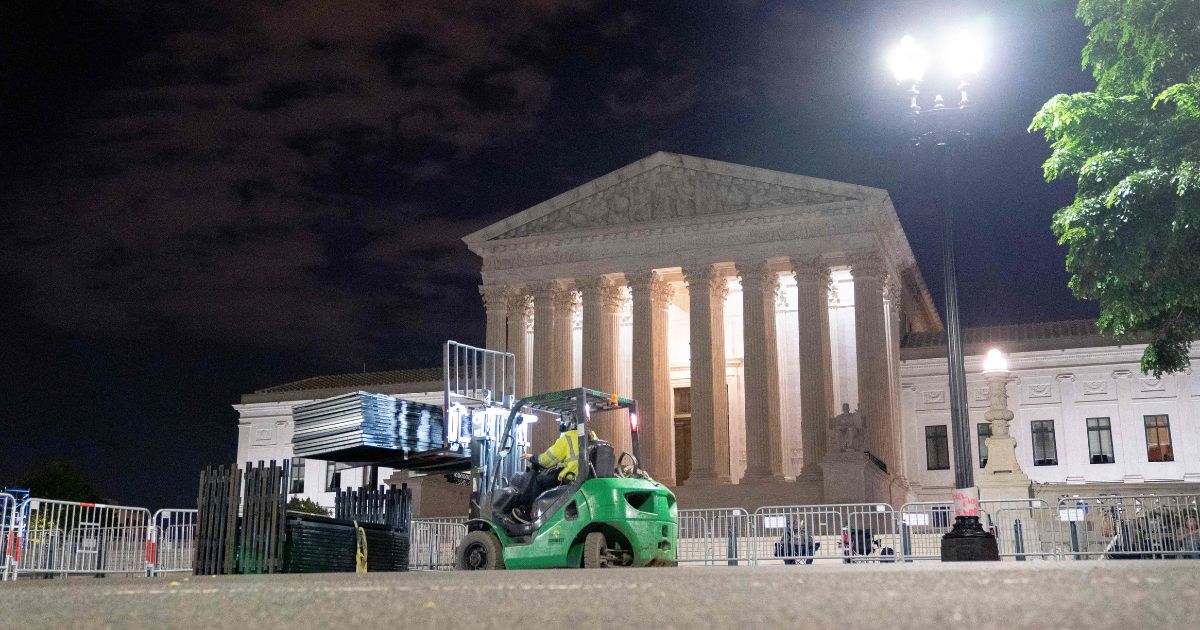 As threats against United States Supreme Court justices grow in the wake of a leaked decision that would overturn Roe v. Wade, the court is being forced to increase precautionary measures.

According to WTTG reporter Lindsay Watts, workers erected a wall of “tall, non-scalable fencing” around the Supreme Court on Wednesday night.

Tall, non-scalable fencing about to go up around Supreme Court. Crews are starting on the back end. There are just a few protesters in front of the court right now. @fox5dc pic.twitter.com/25SpaGOjsC

Geraldo Rivera Loses It When Greg Gutfeld Lays Out His Pro-Life Stance: ‘You Insulting Punk!’

In addition, Justice Samuel Alito cancelled his plans to appear at the Fifth U.S. Circuit Court of Appeals’ judicial conference beginning Thursday, Reuters reported. Alito and his staff did not provide a reason for the cancellation.

The new precautions come as justices are facing both direct and indirect threats in the wake of the leaked opinion. For example, leftist Simon Gwynn, who is verified on Twitter, appeared to make a thinly veiled threat at two conservative justices.

Are leftists trying to destroy the American system of government?

“Interesting real life trolley problem in America now,” Gwynn wrote on Tuesday. “If you had the chance to kill Clarence Thomas and Samuel Alito, the two oldest right wing Supreme Court judges, should you do it while Biden can get his nominees to replace them confirmed?”

Gwynn has since deleted the tweet, but not before Florida congressional candidate Lavern Spicer captured it in a screenshot.

Hey @FBI, when you’re done investigating those garage pulls y’all love so much – I got a live one for you! pic.twitter.com/IKDyqGV3Ng

On Thursday, Gwynn explained he had taken down the tweet and another one that followed it. Even so, he did not really apologize for what he said.

“I’ve removed my recent two tweets about the US Supreme Court as on reflection they’re obviously pretty irresponsible, though I don’t think they would be against Twitter’s TOS,” Gwynn wrote. “FYI I don’t endorse murdering anyone, but don’t think there’s anything wrong with thought experiments.”

California Bill Would Turn State Into an Abortion Destination, Lure Pregnant Women There with Travel Funds

I’ve removed my recent two tweets about the US Supreme Court as on reflection they’re obviously pretty irresponsible, though I don’t think they would be against Twitter’s TOS.
FYI I don’t endorse murdering anyone, but don’t think there’s anything wrong with thought experiments.

In addition to direct threats like this one, pro-abortion protests around the country have grown violent. While they are not direct threats against justices, they are designed to strike fear into them with the hopes of changing their decisions.

In Los Angeles, a group of far left protesters at a pro-abortion rally surrounded police officers, threatened them and hurled expletives at them.

On the same night, pro-abortion activists in Portland, Oregon destroyed property, according to a news release from the Portland Police Bureau.

“During the marches, some participants committed acts of vandalism, including graffiti and broken windows that damaged government buildings, coffee shops and others,” the news release said.

“Some burning material and incendiary devices were thrown at the Mark O. Hatfield U.S. Courthouse, but it’s unknown if any damage was caused.”

For the American justice system to be successful, Supreme Court justices must be able to make decisions without fear of harm to themselves or any other Americans as a result of those decisions.

By engaging in threats and acts of violence because they didn’t get their way, leftists are attempting to destroy the American system of government.