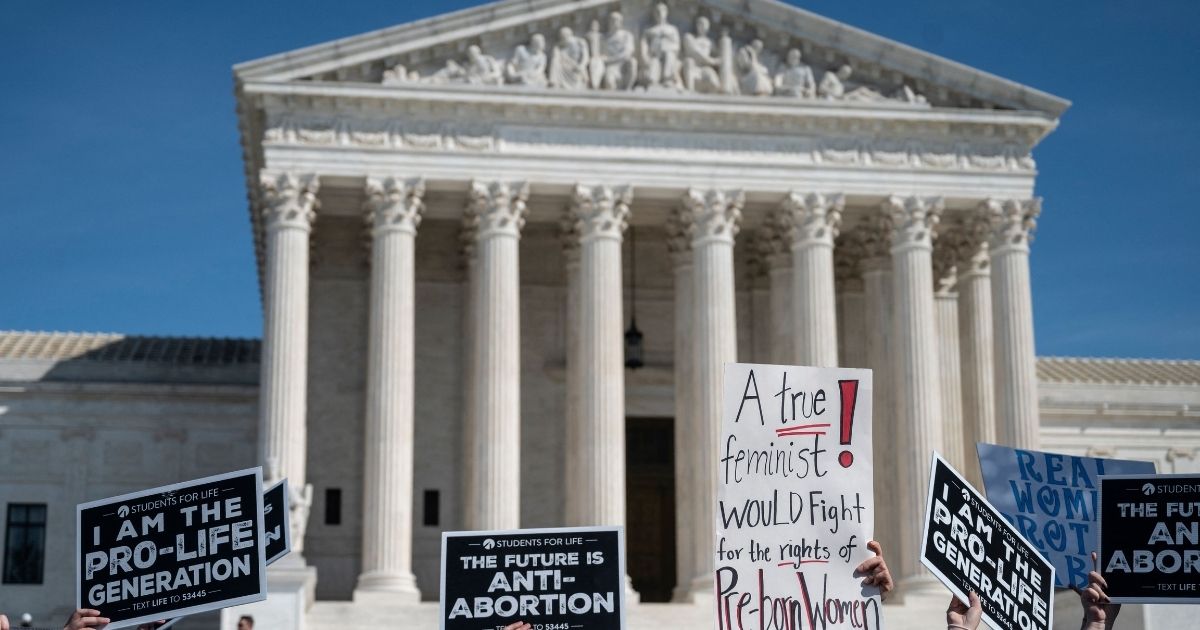 On Wednesday, the U.S. Supreme Court will hear oral arguments in a case challenging a Mississippi law that bans abortions after 15 weeks.

In Dobbs v. Jackson Women’s Health Organization, the justices will consider whether the state’s Gestational Age Act violates the U.S. Constitution as interpreted in the seminal 1973 case Roe v. Wade.

The central holding of Roe is that states may not prevent women from obtaining an abortion during the first trimester of the pregnancy, i.e., 12 weeks.

In the second trimester, states can impose regulations reasonably related to protecting the health of the pregnant woman.

Finally, in the third trimester, states can weigh the interest in protecting the life of the unborn child, as he or she reaches viability outside the womb, against the woman’s “right” to an abortion.

The structure was made up out of whole cloth in terms of the Constitution, which is silent on the matter of abortion.

The justices relied on a “right to privacy” found in the First, Fourth, Fifth and Ninth and 14th Amendments.

Never mind that the right to life is explicitly guaranteed by the Fifth and 14th Amendments, which creates a strong argument that the unborn child’s interest in living is paramount.

That is, of course, unless the life of the mother is in jeopardy due to the pregnancy.

Should Roe v. Wade be overturned?

I distinctly recall then-GOP Rep. Henry Hyde of Illinois making that very point during a House Judiciary Committee hearing during the summer of 1995 when a Democratic lawmaker challenged on what basis the Republicans’ proposed partial-birth abortion ban was based.

His reasoning made sense to me then and it makes even more sense now.

Prior to the Roe decision, over 30 states banned abortions in most cases, according to The Washington Post.

Just four states — Oregon, New York, Alaska and Hawaii — had the wide-open regime the justices created in the 7-2 ruling.

If the justices were to overrule Roe and uphold Mississippi’s Gestational Age Act, 22 states have laws on the books that would restrict abortion more than is allowed under current Supreme Court precedent, according to the Guttmacher Institute.

Head of US Conference of Catholic Bishops Calls Out Wokeness, Social Justice: ‘Pseudo-Religions’

Heritage Foundation scholars Sarah Perry and Thomas Jipping did an outstanding job further breaking down the legal background and implications of the Mississippi case.

“Two features of the law are central to this litigation. First, it is a ban, rather than a regulation, on the performance of abortions. Second, this ban operates well before viability, which the Supreme Court established in Roe, and reaffirmed in Casey, as the ‘critical fact,’” they wrote.

“The Act asserts that the state has an interest in protecting maternal health because the maternal risks from abortion increase proportionately relative to gestational age,” Perry and Jipping continued.

The Supreme Court will hear arguments on Wed in Dobbs v. JWHO, challenging MS’s ban on post-15 week abortions. Here is the paper that my colleague Sarah Parshall Perry and I published on the case. https://t.co/Lt5U2vr5QW

“In addition, the abortion method used after 15 weeks, known as dilation and evacuation, is ‘a barbaric procedure, dangerous for the maternal patient, and demeaning to the medical profession.’”

Dr. Donna Harrison — a board-certified obstetrician-gynecologist and the CEO of the American Association of Pro-Life Obstetricians and Gynecologists — argued in a piece for The Daily Signal that the Mississippi law rests on solid ground in terms of its stated purpose of protecting the health of the mother.

“To put these numbers in perspective, researchers estimate that more than 100,000 American children have died since 1973 from pre-term births linked to prior abortions,” she said.

“And the crisis has influenced minority communities disproportionately hard. Nearly half of these deaths were black children, even though blacks comprise only 14% of the population.”

Harrison noted that she treated multiple women over the course of her career, “who were unable to carry their babies to term due to complications arising from previous abortions.”

She recounted that patients told her they were unaware of the risks later-term abortions posed to their ability to have children later in life.

“I take seriously the Hippocratic Oath’s principal demand—primum non nocere—which means ‘first do no harm.’ Our laws surrounding abortion should do the same. Sadly, they don’t.” https://t.co/zNMXgYh4id

The physician pointed out that the U.S. is behind many European countries — including France, Italy, Germany, Spain, Norway, Switzerland and Belgium — that place gestational limits on abortions.

In fact, the Charlotte Lozier Institute determined in 2014 that the U.S. is one of only seven countries in the world that allow abortions after 20 weeks, sadly placing us right alongside nations that have little regard for human life, such as China and North Korea.

The United States should be a leader in protecting the right to life.

It’s listed in the nation’s founding charter, the Declaration of Independence, as one of the three inalienable rights endowed to us by our Creator.

Let’s hope and pray at least five justices will see this truth and vote to overturn Roe v. Wade.