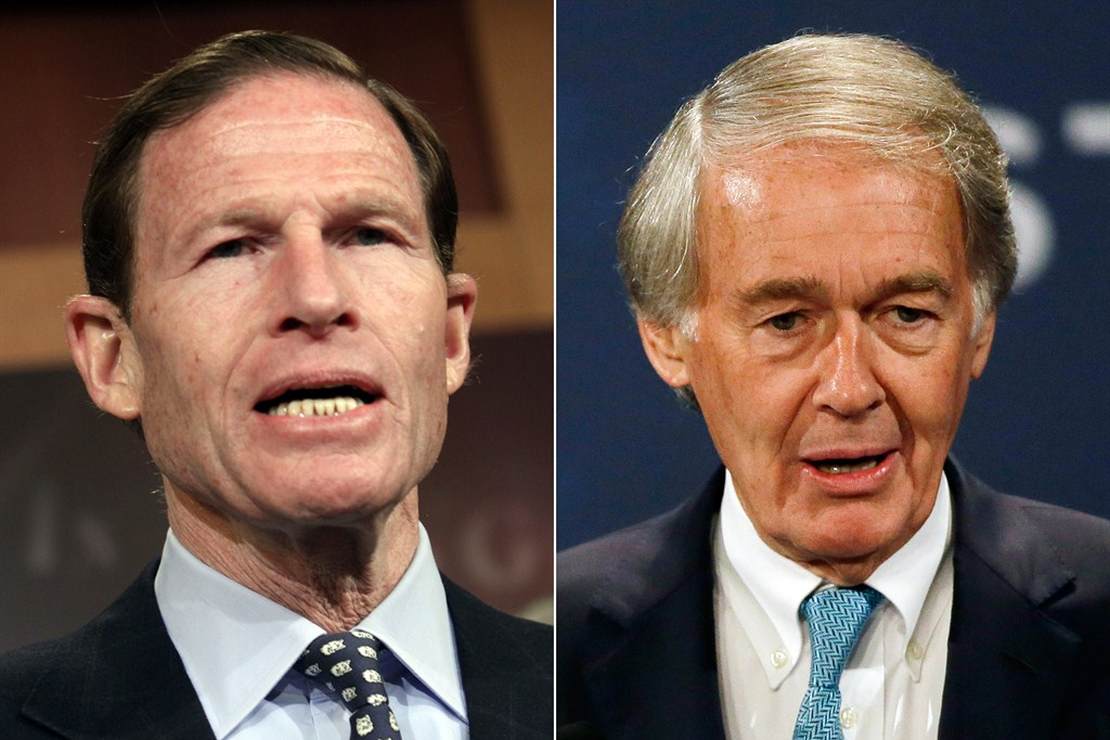 Elon Musk doesn’t actually own Twitter yet but already three Senate Democrats are saying he should be called to testify about his plans for the company.

There are no imminent plans for hearings, but, “We’re thinking about it,” Senate Commerce Chair Maria Cantwell said in an interview Thursday…

Senator Ed Markey, a member of the Commerce Committee who has called for new laws regulating large tech companies, said that a hearing with Musk was necessary given Twitter’s importance.

“It’s a technology which is central to democracy and our economy and it is important for the representatives of the American people to hear what the new owners intend on using that technology to accomplish,” the Massachusetts Democrat said in an interview. “We have to understand the censorship or lack thereof, content moderation or not, that is going to be the policy for the new owner.”…

“In terms of what the values are that this company is going to be creating for the new Elon Musk Twitter world, I think that’s actually a necessary role for Congress to play,” he said.

The third Senate Democrat to chime in was Richard Blumenthal who said, “There is a powerful imperative to ask him to tell Congress and the American people how he’s going to address the concerns that we’ve raised.”

On one hand this sounds like a colossal waste of time. Democrats are always looking for a titan of industry they can pose next to. For Harry Reid it was the Koch brothers. Now these Senators would like it to be Elon Musk so they can try to act smart with questions their staffs prepared for them and maybe do a little fundraising.

On the other hand, Markey’s comments about Twitter being “central to democracy” does kind of dovetail with what Musk himself has been saying about why he wanted to buy it in the first place. So maybe they could actually have a productive discussion about it. Okay, probably not but you never really know.

Sens. Blumenthal and Markey seem to be particularly focused on Elon Musk. Back in February they sent a letter to Musk expressing their concerns about Tesla’s Full Self Driving system:

A pair of Senate Democrats, Richard Blumenthal and Ed Markey wrote a letter Tuesday to Tesla CEO Elon Musk expressing their “significant concerns over recent reports of flaws” with Tesla’s automated driving systems they believe could be unsafe.

“We are deeply troubled by Tesla’s design choices that seemingly encourage unsafe driving habits,” the Senators wrote about the automaker’s “Full Self-Driving” system that was the subject of a recall of over 50,000 vehicles last week.

And last year Blumenthal criticized Musk for responding to allegations that a Tesla autopilot system may have been responsible for a deadly crash in Houston:

“I was very disappointed that Tesla through its CEO took to Twitter to downplay the involvement of the company’s advanced driver assistance system before both the NTSB and NTHSA have completed their ongoing investigation into the deadly accident,” Blumenthal, a Democrat from Connecticut, said Tuesday during a Senate committee hearing.

Earlier this month, a Tesla Model S crashed into a tree and burst into flames in Houston, killing two people. Evidence from the crash site indicates no one was in the driver’s seat and it may have been operating on Autopilot. Tesla’s electric vehicles come with Autopilot, a feature that allows the cars to brake, accelerate, and steer automatically.

Blumenthal was specifically criticizing this tweet from Musk about the accident:

Your research as a private individual is better than professionals @WSJ!

Data logs recovered so far show Autopilot was not enabled & this car did not purchase FSD.

Moreover, standard Autopilot would require lane lines to turn on, which this street did not have.

Last October the Associated Press reported that, contrary to the early reports, both passengers were in the front seat prior to the crash. There was also evidence the driver was flooring the pedal while driving at night on a curved road.

Although first responders found one man in the back seat and the other in the front passenger seat, the NTSB said both the driver and a passenger were in the front seats with belts buckled at the time of the crash.

The agency said the car was traveling up to 67 mph in the five seconds leading up to the crash, and the driver was accelerating. Data from the car’s fire-damaged event data recorder revealed that at times, the accelerator pedal was pressed as high as 98.8%, the NTSB report said.

As for autopilot, investigators took another Tesla to the scene and were unable to get auto steering to engage:

The fatal trip began at the owner’s home near the end of a cul-de-sac, and home security video showed the owner getting into the driver’s seat and the passenger entering the front passenger seat, the report said. The car traveled about 550 feet before leaving the road on a curve, going over a curb, hitting a drainage culvert, a raised manhole and a tree…

In a preliminary report from May, the NTSB said it tested a different Tesla vehicle on the same road, and the Autopilot driver-assist system could not be fully used. Investigators could not get the system’s automated steering system to work, but were able to use Traffic Aware Cruise Control.

In short, it looks like Sen. Blumenthal faulted Musk for replying accurately in response to news reports about a crash that were substantially false. But one year later Blumenthal wants to summon Musk to Congress and grill him about controlling misinformation on Twitter.

In any case, I don’t think Musk has much to worry about being in the room with these guys even if they are out to dunk on him. The whole situation brings to mind that scene from The Watchmen when Rorschach winds up in prison with a bunch of very bad guys who think they’re finally going to have some fun with him. He explains to them that’s just not the situation.

It could be several months before all the details are worked out and Musk is actually the owner of Twitter. All he has to do is tell the Senators he’s not available to testify until sometime in late November and this problem will probably resolve itself.