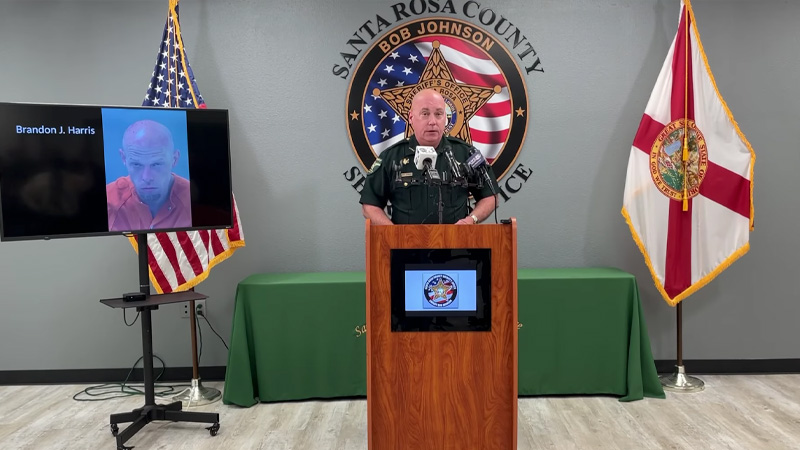 A sheriff in Florida urged residents to use lethal force if necessary against home intruders in order to save taxpayers money.

“We don’t know what homeowner — which homeowner — shot at him. I guess they think they did something wrong, which they did not,” Johnson said.

He proceeded to invite the resident that opened fire to attend a firearms training course hosted by the sheriff’s department, in hopes the resident can improve their aim.

“If somebody’s breaking into your house, you’re more than welcome to shoot them in Santa Rosa County, and we prefer that you do actually. Whoever that was, you’re not in trouble. Come see us. We have a gun safety class we put on every other Saturday. If you take that, you’ll shoot a lot better, and hopefully, you’ll save taxpayers money.”

The sheriff discussed the apprehension of suspect Brandon Harris, 32, who led police on a foot chase through a neighborhood as he was pursued in connection to a string of burglaries.

“He’s jumping fences and breaking into houses as he goes,” Johnson said at a press conference describing police body cam footage of the incident. “We finally corner him inside a home he broke into on Tom Sawyer (Road), and we corner him in a bedroom.”

Harris broke out of a window as police entered the room, but he was quickly arrested on the lawn of the home.

A resident recounted to WKRG the harrowing moment he received a phone call from his wife telling him the suspect was running through their neighborhood.

“It was terrifying knowing I’m all the way in Pensacola at work, and this is happening,” said Philip Marschke, whose daughter was reportedly “playing in the backyard and ran inside to her mother as Harris charged toward the door.”

“She locked the door just in time as he got to the door and started pulling on it,” Johnson recalled.

“He like smiled at (my wife) through the window…I don’t know if he was trying to reassure her it was ok for him to come inside.”

Harris was already wanted on warrants involving felony violation of probation, battery, and aggravated assault with a weapon.

Democrats Announce Next Plan To Infringe On American’s 2nd Amendment