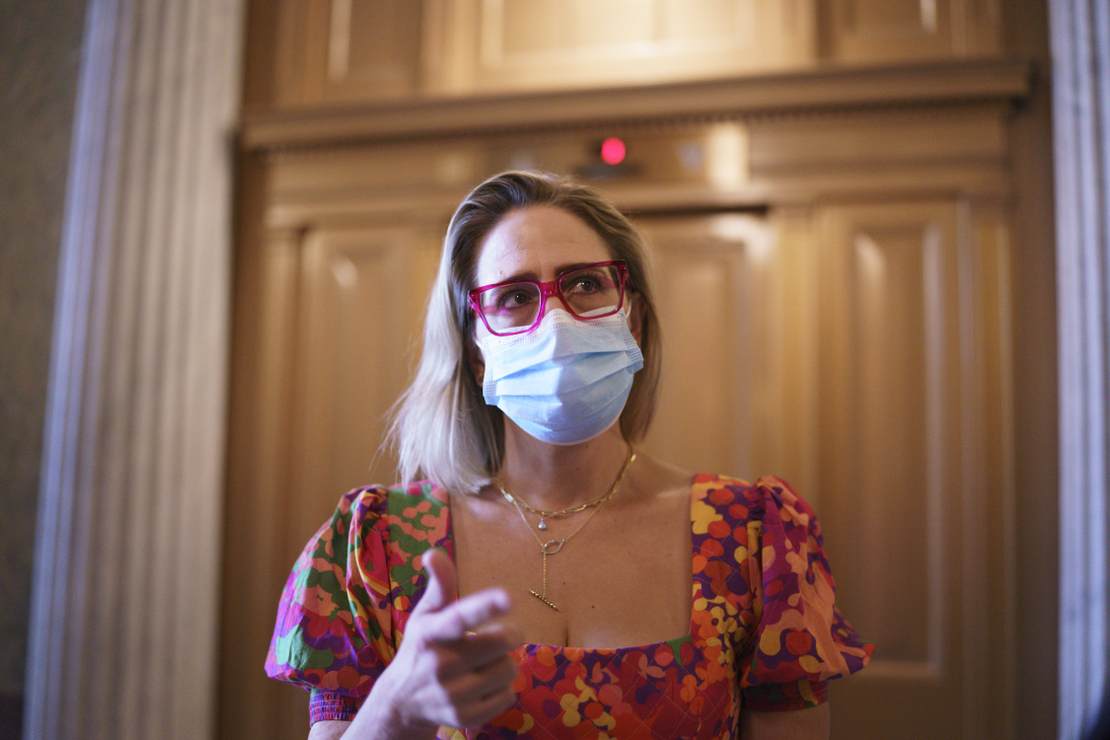 “I’m always surprised when people say, ‘Oh, she’s an enigma’,” Kyrsten Sinema told the Washington Post for its profile of the Senate Democrat. Perhaps not, but the Post’s Tony Romm and Seung Min Kim are still left reading the tea leaves on whether Joe Manchin remains the only obstacle to Joe Biden’s Build Back Better plans. With Sinema issuing I told you sos on inflation, it certainly looks as though Manchin has company.

Sinema isn’t a fan of the House version that passed this morning, or even of the Biden proposal that shaped it:

With inflation spiking in October, Sinema added that she hopes it “helps people understand why I have been concerned about high levels of spending that are not targeted or are not efficient and effective.”

Sinema also sent mixed signals as the House prepared to vote Friday on a retooled, roughly $2 trillion tax-and-spending plan. She noted it differs from the blueprint that Biden had worked out with centrists weeks earlier, but she did not say what, if anything, she might change.

While Romm and Kim routinely do good reporting for the Post, this feels more like a rehash than a revelation. The only significant departure from other reporting on Sinema is that this includes more input from the senator herself. But even that doesn’t add much. We find out that Sinema listens to her constituents:

“What I think about is: What are the folks in my state hungry for? What do they need? How can I make their lives a little bit better? How can I make government less of a problem in their life? And what are the things that I can do today to help solve that? And, you know, I think it works.”

“In the context of our negotiations, I am always someone who is prepared, upfront — I have my spreadsheets — and I am always very direct in my conversations[.]”

Perhaps the most revealing quote Sinema gives them indicates another of her sticking points. Sinema wants funding targeted at programs that promote independence rather than dependence:

“In addition to my own training as a social worker for a number of years before I entered into politics,” she said, she “grew up in very difficult financial circumstances. So I do understand the importance of having a helping hand when families need it.”

But, Sinema added, her focus with the tax-and-spending plan had been on “creating an economic climate that provides opportunity for folks to become financially independent.”

Inflation makes dependence worse, and so Sinema wants to restrict the flow of money even further by targeting specific ways to promote independence. That means that the cradle-to-grave system sought by progressives in this bill, especially Bernie Sanders, are a no-go for Sinema.

Or so we guess, anyway. The Post’s profile doesn’t really supply us any answers, only perhaps slightly more focus on Sinema tea leaves for the reconciliation bill. At the moment, Sinema remains an enigma — and at least another potential obstacle to any large-scale social engineering desired by Biden and Sanders.