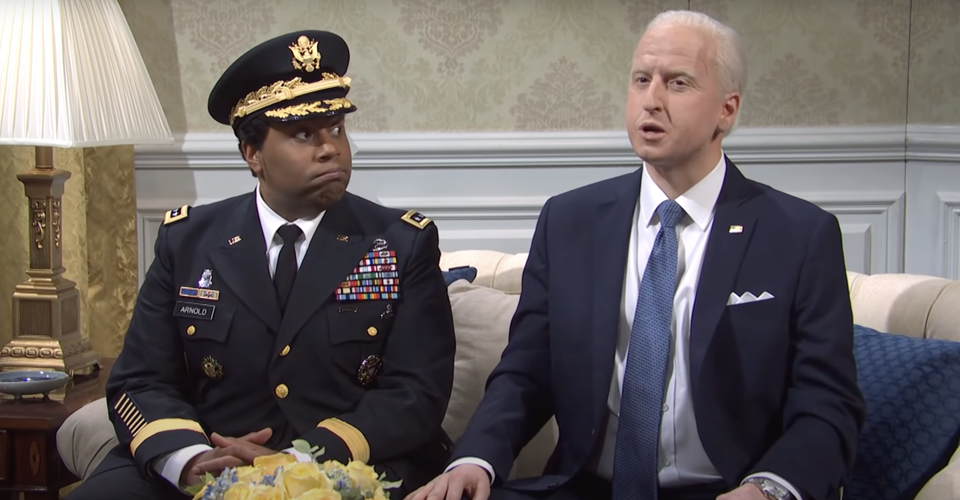 No one seems to agree about what Russia’s saber-rattling behavior on the Ukrainian border means. In America, normally united political forces—such as Fox News commentators and the GOP—are divided over how to talk about Vladimir Putin’s latest moves. In Europe, allied superpowers are not all making the same preparations for possible war. The White House and Ukrainian leaders are openly disputing how seriously to take the threat of Putin sacking Kyiv.

So perhaps some viewers were comforted by Saturday Night Live’s response to such a confusing and terrifying situation with the exact same kind of comedy it always does. The world may be on the brink of a major new conflict, but Lorne Michaels can still assemble his actors for an Oval Office cold open featuring a hodgepodge of one-liners that aim less for insightful political satire than for proof that the show’s writers read the internet.

In last night’s starting segment, James Austin Johnson’s President Joe Biden squinted and said “malarkey” as his advisers updated him on the situation in Eastern Europe. Putin’s soldiers, according to an official played by Alex Moffat, were the “least of our problems.” The real threat: Russian propaganda. Fake headlines—“Ukrainian Border Encroaching on Russian Troops,” “Neil Young to Remove Music From Spotify Unless Ukraine Surrenders”—were ginning up support for invasion. America’s best hope to stop Russia lay in a mean teenage girl who could cyberbully Putin.

SNL’s focus on disinformation highlighted a real and salient tactic that Russia is using in its military buildup. But the concept mostly just let the show clear out some unused ideas about other trending topics. The nearly seven-minute segment subsisted on TikTok imitations, tired memes (Crying Jordan in 2022, really?), and gossip (“We’re even getting some reports that Russia has already invaded, but those are from the same people who said Tom Brady retired,” Ego Nwodim said). The sketch itself also felt propagandistic at times: a pro-Russia commercial portrayed the country as full of arsenic miners who eat potash.

Read: ‘The timeline you’re all living in is about to collapse’

Only when turning its ire to American leaders did the sketch manage to draw a laugh while making a point: “Let’s do something simple and fun that everyone can get behind,” Johnson’s Biden suggested, “like a drone strike!” The same principle behind that joke—the show is most comfortable when mocking presidents—held true later on “Weekend Update.” “Well, the stock market is plummeting, and there’s a threat of land war in Europe,” Colin Jost said. “So it looks like Democrats were right—Joe Biden is the next FDR.” Jost went on to quote the Ukrainian official Oleksii Danilov saying that “panic is the sister of failure.” An image of Donald Trump’s sons flashed, and Jost asked, “I thought Ivanka was the sister of failure?”

With anxieties about war hanging palpably over the generally forgettable episode, other sketch topics were notable mainly for how quotidian they were. A New York City tenants’ meeting gave the cast a chance to try out a variety of impressions of angry normies. A music video about waking up in the middle of the night put a catchy tune to a series of very relatable observations. Though known for his otherworldly intensity, the episode’s host, Willem Dafoe, felt like a muted presence, except in a strange sketch about impotence.

As is so often the case with SNL, the best moments were the most absurd ones. Ever the master of goofy stagecraft, the musical guest, Katy Perry, turned her set into a mushroom forest. Aidy Bryant and Bowen Yang played trend forecasters with inferno-hot contempt for men using movie posters as decor. (Bryant also dissed babies: “Get in your bed that is also a jail!”) The night’s highlight came from the former NFL quarterback Peyton Manning, who joined “Weekend Update” to talk football but really just raved about Emily in Paris. He, like SNL, knew he was supposed to be discussing the news of the week—but frivolity and distraction made for the more satisfying play.