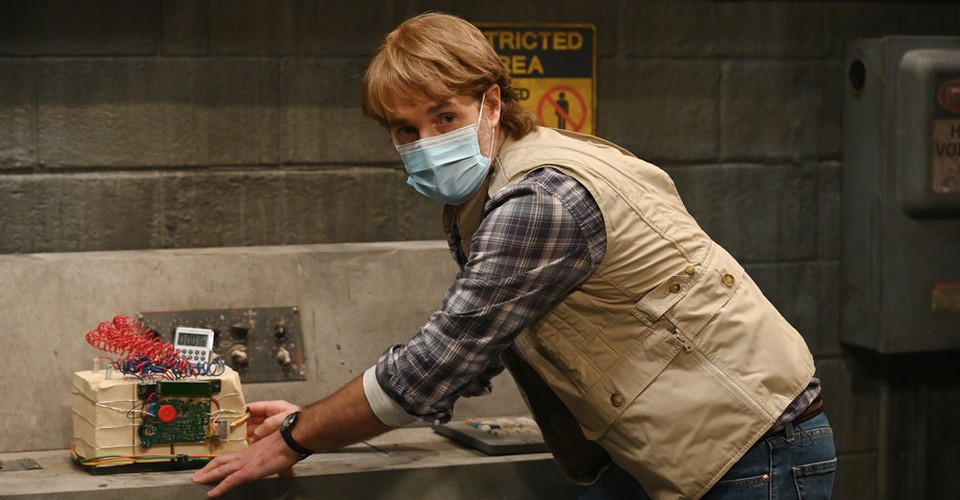 Before the former Saturday Night Live cast member Will Forte made his hosting debut on the show yesterday, one of the more memorable moments from his eight-year tenure circulated online. In a 2005 sketch, Forte played a timid, overwhelmed spelling-bee contestant. When asked to spell the word business, he produced a deadpan, 75-letter sequence of consonants. As would so often occur during his time on SNL, Forte bulldozed past absurdity to find fresh hilarity. The current cast member Bowen Yang shared the clip on Instagram with the caption “legend.”

Forte is a champion of eccentricity, adeptly playing awkward, tightly wound characters whose veneer often comes close to shattering—if it hasn’t already. Last night, Forte revisited his version of weird, bringing a playful looseness that generated this season’s strongest night thus far. After the previous particularly bleak episode, Forte’s presence was a welcome shift for SNL. Instead of wrestling with the bizarreness of our present reality, the show leaned into a jubilant zaniness of its own. Forte’s comedy felt like a release—and the cast responded with vigor.

Read: ‘The timeline you’re all living in is about to collapse’

It took 12 years after leaving the cast for Forte to get the call to host—a major oversight on SNL’s part—and he used his monologue to highlight the discrepancy. “It was really fun to see Kristen [Wiig] host, then Bill [Hader], then Andy [Samberg], then Fred [Armisen], then Kristen again, then Bill again, then Jason [Sudeikis],” he said, summarizing his former teammates who received the honor before he did. “I’m not bitter about it. Save the best for last, right? Save the best for way last.” Then Lorne Michaels showed up to rib him. Standing beside next week’s host, Willem Dafoe, he told Forte there’d been a mistake. “You think I would book someone named Will, then someone named Willem?” Michaels asked, ultimately blaming the mix-up on autocorrect.

The setup was clear: Forte had had to wait more than a decade to receive hosting duties, and he was there to have fun. With a chip planted sarcastically on his shoulder, Forte used the episode to showcase his uninhibited energy. In “Kid Klash,” a spoof on the ’90s Nickelodeon kids’ game show Family Double Dare, Forte’s host, Mark Zazz, turned sinister. When Tatum (Aidy Bryant) couldn’t locate a flag in an oversize tub of whipped cream, Zazz forced her to keep playing long past the buzzer. “The whipped cream is adversity and the flag is your unfulfilled potential,” he told her, sneering. Bryant came close to breaking character as the situation devolved into a grim fever dream of children’s television.

During his time on SNL, Forte didn’t amass the number of recurring characters that some of his fellow cast members did. But last night, he brought back his most famous one: the perpetually inept action hero MacGruber, a spoof of the classic TV drama MacGyver’s star. The original “MacGruber” bits escalated over the course of an episode, serving as a recurrent interstitial between sketches. Last night’s version (with Wiig and Ryan Phillippe) updated that format for the COVID era. Over three brief scenes, MacGruber revealed that he was an anti-vaxxer, and he eventually got wrapped up in QAnon. The story line was one of the few that engaged directly with our current reality. Watching MacGruber wax on about conspiracy theories while the bomb he was meant to dismantle ticked away was poignantly on the nose. It revealed the funny nestled inside the madness—all thanks to Forte’s character work.

Forte also resurrected the topic-specific country singer Clancy T. Bachleratt, who, with his music partner, Jackie Snad (played by Wiig), sang only about “spaceships, toddlers, Model T cars, and jars of beer.” Forte and Wiig’s energy breathlessly ratcheted up over the course of the sketch, reaching a climax during the “Soon-to-Be New Official Song of the NFL,” which showcased their screaming vocal runs.

Forte’s hosting stint asserted him as one of SNL’s contemporary legends. His deliciously oddball presence invigorated the stale season, serving as a reminder of how wonderfully wild the show can be when it doesn’t force comedy to respond to a moment it fails to fully understand. Watching Forte was a relief. “I waited 12 friggin’ years for this,” Forte said. So did we.