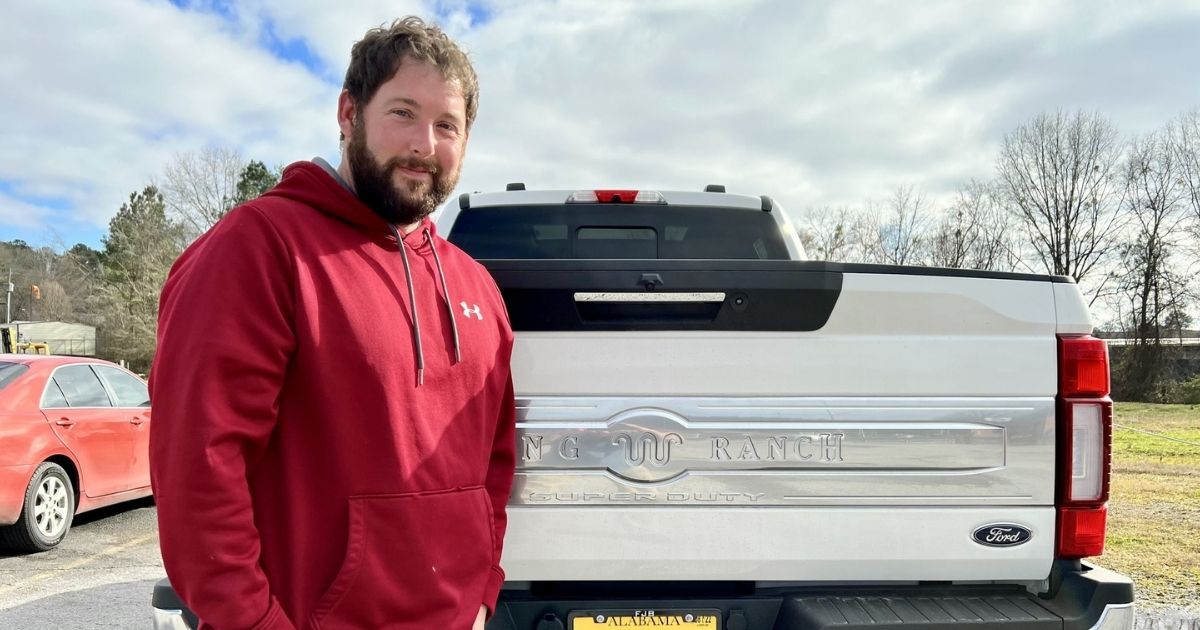 The Alabama Department of Revenue threatened to revoke an Oneonta man’s vehicle registration if he does not relinquish a custom license plate containing an apparent insult to President Joe Biden.

According to the Trussville Tribune, Nathan Kirk ordered the license plate in question when he bought a new Ford truck in October. The design of the license plate contains the words “Don’t Tread on Me” along with the distinctive snake from the Gadsden flag.

For the personalized portion of the license plate, Kirk chose the letters “LGBF JB.” Many people deduced these letters were meant to stand for the anti-Biden phrases “Let’s go, Brandon” and “F*** Joe Biden,” a conclusion seemingly supported by the “Let’s Go Brandon” license plate frame Kirk put around it.

Personalized license plates in Alabama are supposed to take two to six weeks to arrive, the Tribune reported. However, this period passed and Kirk’s temporary paper license expired before he was issued the new plate. Kirk said the state blamed the delay on an aluminum shortage.

In December, he reordered the custom license plate, and he finally received it in January.

Throughout the process, Kirk said, no one raised an issue with the content of the personalized plate.

But this month, the state Department of Revenue sent a letter to Kirk’s wife, Courtney, AL.com reported. The truck with the license plate on it was registered in her name.

“The Alabama Department of Revenue, Motor Vehicle Division, has determined the above referenced license plate contains objectionable language which is considered by the Department to be offensive to the peace and dignity of the State of Alabama,” the letter said, according to the report.

So many sensitive folks… it’s literally a string of letters, leave it alone

The letter said Kirk had 10 days to return the license plate before his vehicle registration would be revoked, and it was dated Feb. 17. If he drove the vehicle without a valid registration, he would be issued a $500 fine for the first offense and a $1,000 fine for each additional offense.

Kirk said he was surprised to receive the letter in February.

“It’s been on the road for a month, and it was approved a long time ago; it was approved immediately when I bought it,” he told the Tribune. “They didn’t have any issue taking the six or seven hundred dollars it cost from me.”

Kirk guessed that during the period between his original order and this letter, a state official caught wind of the license plate and decided to suppress it.

“Nothing about it is right,” he said, according to the New York Post. “Someone at Montgomery, I’m assuming, doesn’t like it and now they’re throwing a fit.”

While it could be reasonably concluded that Kirk meant to invoke the anti-Biden phrases, he pointed out that the license plate does not contain any vulgar language. Furthermore, he noted, there is no way to prove that his intention with these six letters was vulgar criticism of the president.

Should Kirk be allowed to keep this license plate?

Alabama Department of Revenue regulations prohibit license plates with “objectionable language or symbols which are considered by the Department to be offensive to the peace and dignity of the State of Alabama.”

However, the regulations are supposed to be enforced before the plates are “manufactured and issued,” not a month after the plate is sent to a customer.

In addition, Kirk said, the letters do not spell vulgar words or inherently stand for offensive language. Only an individual interpretation of the letters would lead someone to think of vulgar language.

“My point is, it’s letters,” he said, according to the Post. “It could be my kid’s initials. It could be my grandmother or grandfather. It’s just letters. It doesn’t spell anything.”

Department of Revenue rules say a resident may appeal a revocation or denial of a personalized plate with the Alabama Tax Tribunal. Kirk told AL.com many supporters have urged him to fight the decision with legal action in order to defend his First Amendment rights.

“Most people only think it’s free speech if it only represents a certain aspect of the country or a certain portion of the country, and that’s not what the First Amendment is about,” Kirk said. “I have the right to put a tag on my vehicle and it can say what I want it to say.”