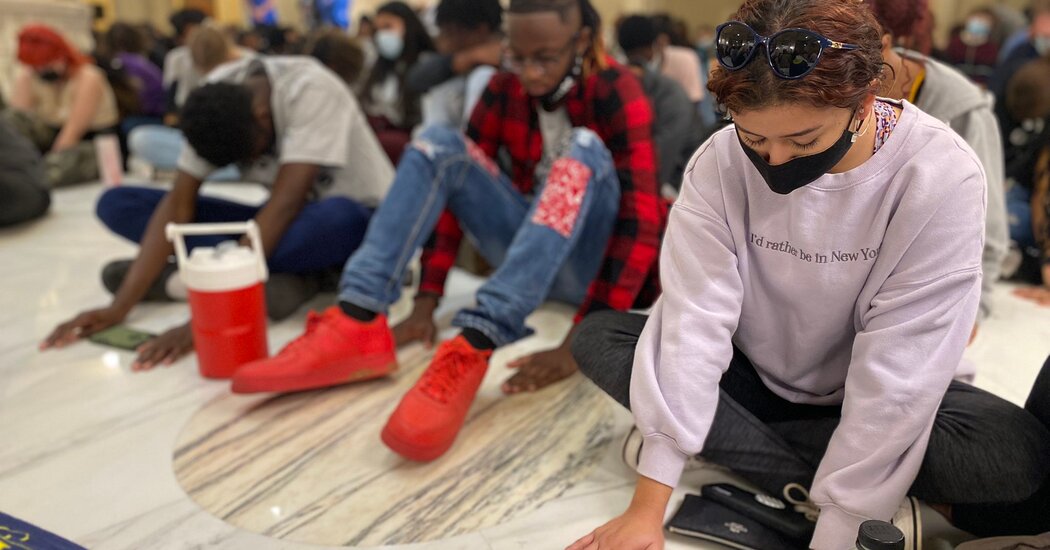 Hundreds of students walked out of schools and activists demonstrated outside the office of Gov. Kevin Stitt of Oklahoma on Wednesday in a final attempt to persuade him to grant clemency to a death-row inmate who was scheduled to be executed on Thursday.

The inmate, Julius Jones, was convicted of first-degree murder and sentenced to death in 2002. He was accused of killing Paul Howell, who was in a car in the driveway of his parents’ home when he was carjacked and fatally shot in 1999.

Mr. Jones, 41, a former high school basketball player from Oklahoma City, was 19 at the time of the killing, which he says he did not commit. Mr. Howell, a businessman from the suburb of Edmond, was 45.

In September and again this month, the state’s Pardon and Parole Board recommended that Mr. Jones’s sentence be commuted to life in prison with the possibility of parole, a significant step in a case that has garnered national attention, said Cece Jones-Davis, who directs an Oklahoma-based campaign called Justice for Julius.

But Mr. Jones, his family and his supporters are still waiting to hear whether Mr. Stitt, a Republican, will accept or reject the board’s recommendation, Ms. Jones-Davis said. Mr. Jones is scheduled to be executed by lethal injection at 4 p.m. on Thursday.

“We are hoping and believing and trusting that the governor is still going to do the right thing,” Ms. Jones-Davis said on Wednesday. “But we are coming down to the hour.”

The Oklahoma City Public Schools estimated that more than 1,800 students across 13 schools participated in walkouts to support Mr. Jones on Wednesday. The district said it “supports our students’ rights to peaceful assembly and their freedom of expression.”

“If my child is executed tomorrow, or any day, it should be without a doubt,” she said. “It shouldn’t be a doubt. Not even a little bit of doubt.”

At least one person, a local pastor, was arrested during protests outside the governor’s mansion on Wednesday night, according to News 4, a TV station in Oklahoma City.

There were also calls for supporters to gather on Thursday for a “Freedom Vigil” in at least two locations, including the capitol and the Oklahoma State Penitentiary.

A spokeswoman for Mr. Stitt said in an email: “We will not have any comments until after the governor has made a decision.”

If he is executed, Mr. Jones would be the first person put to death by the State of Oklahoma since John Marion Grant, who was convicted of murdering a prison cafeteria worker in 1998, was executed on Oct. 28.

Mr. Grant, 60, was the state’s first inmate to die by lethal injection since 2015, when Oklahoma stopped executions after using the wrong drug in one instance and allowing a prisoner to regain consciousness in another.

Mr. Grant vomited while shaking for several minutes during the execution, which reporters who have witnessed executions called extremely rare in their experience. But state prison officials said a day after Mr. Grant’s execution that they did not plan to make any changes to the state’s lethal injection protocols.

“I will agree inmate Grant’s regurgitation was not pleasant to watch,” Scott Crow, the director of Oklahoma’s prison system, said at a virtual news conference on Oct. 29. “But I do not believe that it was inhumane.”

Mr. Jones, a Black man who has spent about half of his life in prison, has long maintained his innocence.

“I did not kill Mr. Howell,” he wrote in a letter to the parole board in April, after he had exhausted his appeals. “I did not participate in any way in his murder; and the first time I saw him was on television when his death was reported.”

But relatives of Mr. Howell, a white man whose sister and two daughters witnessed his killing, have rejected those claims and said that the efforts to grant clemency to Mr. Jones have caused them pain.

“Our family continues to be victimized by Julius Jones and his lies,” Mr. Howell’s brother, Brian Howell, said at a news conference in September.

Mr. Jones and his supporters have argued that his defense lawyers failed him during his trial — for instance, by neglecting to question family members who have said that he was having dinner with them at the time of Mr. Howell’s killing — and that prosecutors relied too heavily on the testimony of a co-defendant who said that he had seen Mr. Jones commit the crime.

Mr. Jones’s supporters have also argued that racism played a role in his trial and sentencing. African Americans make up a disproportionate number of death row prisoners in Oklahoma and in the United States, and research has shown that people convicted of murder are much more likely to be executed if the person who was killed was white.

Mr. Jones’s appeal for clemency has drawn support from prominent figures in sports, politics and entertainment.

Last month, Matt Schlapp, the chairman of the American Conservative Union, and Timothy Head, the executive director for the Faith & Freedom Coalition, wrote a letter to Mr. Stitt urging him to commute Mr. Jones’s sentence.

“We believe that doubt about Jones’s responsibility for the capital crime is not insignificant,” Mr. Schlapp and Mr. Head wrote.

On Wednesday, Baker Mayfield, a quarterback for the Cleveland Browns, who won the Heisman Trophy as a player for the University of Oklahoma football team, also expressed hope that Mr. Jones would not be executed.

“We’re 24 hours away,” he told reporters. “So it’s tough. You know, hopefully God can intervene and handle it correctly and do the things he needs to do.”