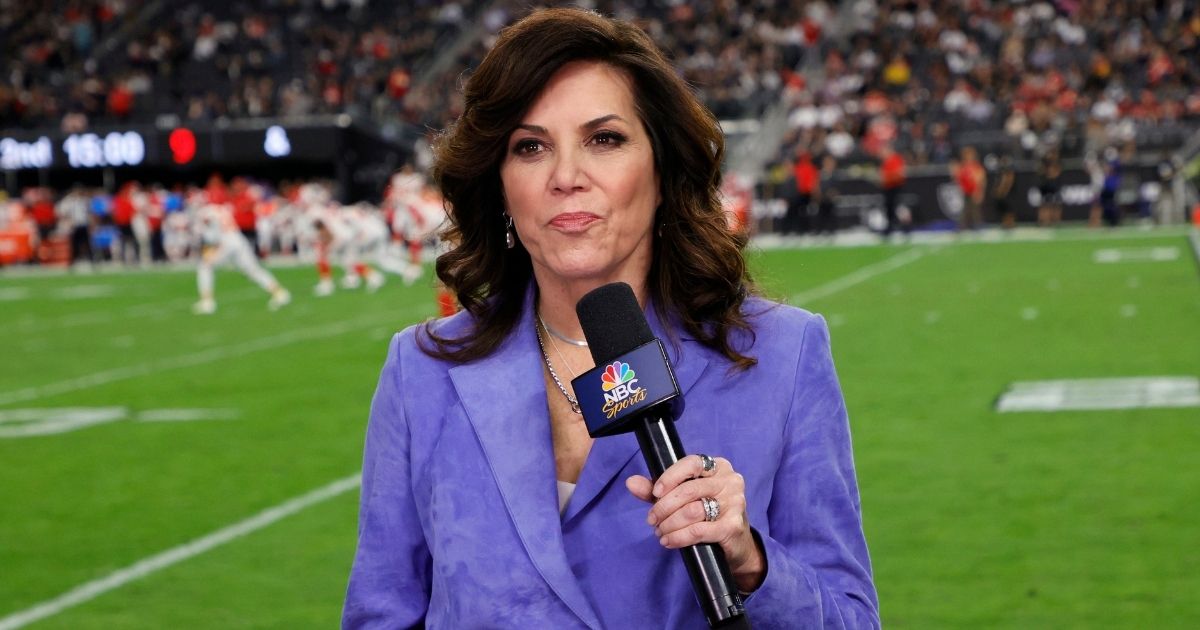 Last month, NBC sideline reporter Michelle Tafoya called out former NFL player Colin Kaepernick’s lies in his Netflix series. Now, she reportedly plans to step away from her role with “Sunday Night Football” at the end of the season.

According to the New York Post, Tafoya has told sources she plans to step away from the sidelines after the Super Bowl in February 2022.

In his Netflix docuseries, “Colin in Black and White,” Kaepernick compared the NFL combine to slavery.

“The majority of the owners of the NFL are white men. The majority of the players are black men. So there is — that comparison that he makes to slave owners and slaves is not, sort of, totally unreasonable or out of bounds,” Haines said.

This logic is obviously ridiculous. The color of people’s skin does not automatically implicate them as slaves or slave owners.

Haines failed to mention the obvious difference between the NFL combine and slavery, which is that players are voluntarily participating in the combine in hopes of earning millions of dollars to play football.

Do you think Tafoya’s comments led to her exit from “Sunday Night Football”?

That is a stark difference from slavery in America in the 1700s and 1800s, where black men were forced to work for white men against their will without any payment.

Since Tafoya is a reasonable person, she pointed out this fact on the show.

“I’ve been covering the NFL for 25 years,” she said, according to Fox News. “Nobody forces these guys to play. I thought comparing it to the slave trade was a little rough … These guys enter willingly, they are the most well cared for people.

“Yes they play a hard sport, and every one of them, black, white, Latino, whoever’s playing the sport, will tell you how much they love it and they’re willing to do it and they make a damn good living.”

In response, “The View” co-host Sunny Hostin parroted the lie that Kaepernick is being blackballed from the NFL because of his political views.

Mere Weeks After Wanting NFL to Give Him Another Chance, Kaepernick Compares Player Evaluation to Slave Auctions

“He loves the sport but the white owners have prevented him from doing it,” she said. “They’ve colluded and they have all the power to prevent him from doing the one thing that he loves. That’s the power dynamic.”

Tafoya then said the one thing about Kaepernick that you are not allowed to admit on the left.

“If they believed he could win them a Super Bowl, he would be on a team right now. I promise you that,” she said.

Tafoya happens to be 100 percent correct. The reason Kaepernick is not on an NFL roster is that his talent is at best that of a backup quarterback, and teams have decided his off-field antics are not worth the drama he would bring.

But in the leftist world that is the establishment media, this sort of thinking is banned. Anyone who says a black man is where is because of his own decisions instead of “systemic racism” is branded as a racist themselves.

That is why Tafoya’s points were not well-received by the audience, who were “jeering” at her, according to Decider.

“While Tafoya wasn’t booed off the stage, per se, she came pretty close,” the outlet reported.

And while there is no way to definitively prove it, that may be the same reason why she will step away from “Sunday Night Football.”

According to a separate article from Fox News, Tafoya has missed the last three “Sunday Night Football” games. In a statement, NBC said it had nothing to do with her appearance on “The View.”

“Michele will be back on the sidelines this weekend,” NBC said this week, according to Fox News. “As we have done repeatedly, we’re again giving our announcers bye weeks in 2021, and we plan to do it well into the future.

“Michele’s off weeks — which were determined prior to the season — were all in cold-weather cities after Thanksgiving, and her final weekend off this season comes on Jan. 2 in Green Bay. Any other speculation about her time off is blatantly false.”

While the statement may be true, the recent report from the Post makes it nearly impossible not to wonder whether Tafoya’s impending departure is somehow related to her conservative points made on “The View.”