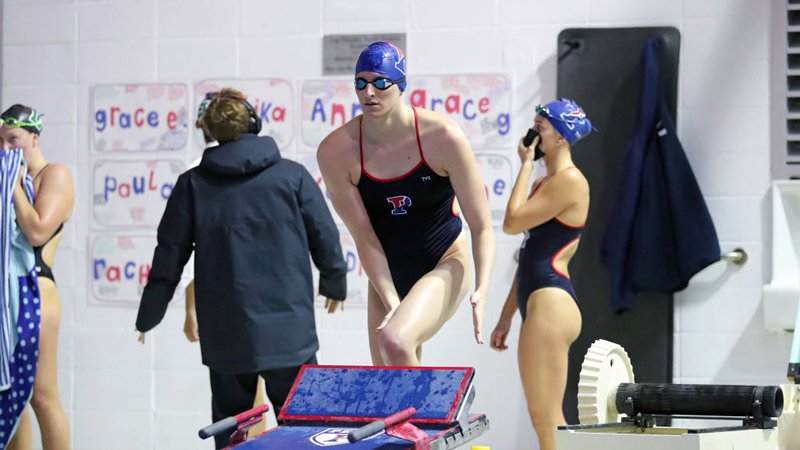 A teammate of trans University of Pennsylvania swimmer Lia Thomas has gone on record complaining she feels uncomfortable in her own locker room because her biologically male teammate sometimes won’t cover his genitals.

Speaking to The Daily Mail, the anonymous teammate described being freaked out by Thomas, who’s made it apparent s/he’s still attracted to women.

“It’s definitely awkward because Lia still has male body parts and is still attracted to women,” the unidentified swimmer told The Daily Mail.

While Lia covers herself with a towel sometimes, there’s a decent amount of nudity,  the swimmer said. She and others have had a glimpse at her private parts.

She stated that team members have raised their concern with the coach, trying to get Thomas ousted from the female locker room, but got nowhere.

The swimmer says when girls on the team tried to address the issue, they were accused of attempting to ostracize Thomas.

“Multiple swimmers have raised it, multiple different times,” she told the Mail. “But we were basically told that we could not ostracize Lia by not having her in the locker room and that there’s nothing we can do about it, that we basically have to roll over and accept it, or we cannot use our own locker room.”

“It’s really upsetting because Lia doesn’t seem to care how it makes anyone else feel,” the unnamed swimmer added. “The 35 of us are just supposed to accept being uncomfortable in our own space and locker room for, like, the feelings of one.”

The swimmer says UPenn bent over backwards to appease Thomas, while dismissing the voices of several members on the swimming team.

“The school was so focused on making sure Lia was okay, and doing everything they possibly could do for her, that they didn’t even think about the rest of us,” the swimmer says.

“It just seems like the women who built this program and the people who were here before Lia don’t matter. And it’s frustrating because Lia doesn’t really seem to be bothered by all the attention, not at all. Actually she seems like she enjoys it. It’s affected all of us way more than it’s affected her.”

According to the Mail, the NCAA has decided to leave the transgender issue up to each sport’s governing body, which in Thomas’ case is USA Swimming.

“We also strongly believe in competitive equity, and, like many, are doing our best to learn and educate ourselves on the appropriate balance in this space.”

Thomas, meanwhile, has dominated the sport, smashing several records at his/her school, and will be featured in an upcoming issue of Sports Illustrated.